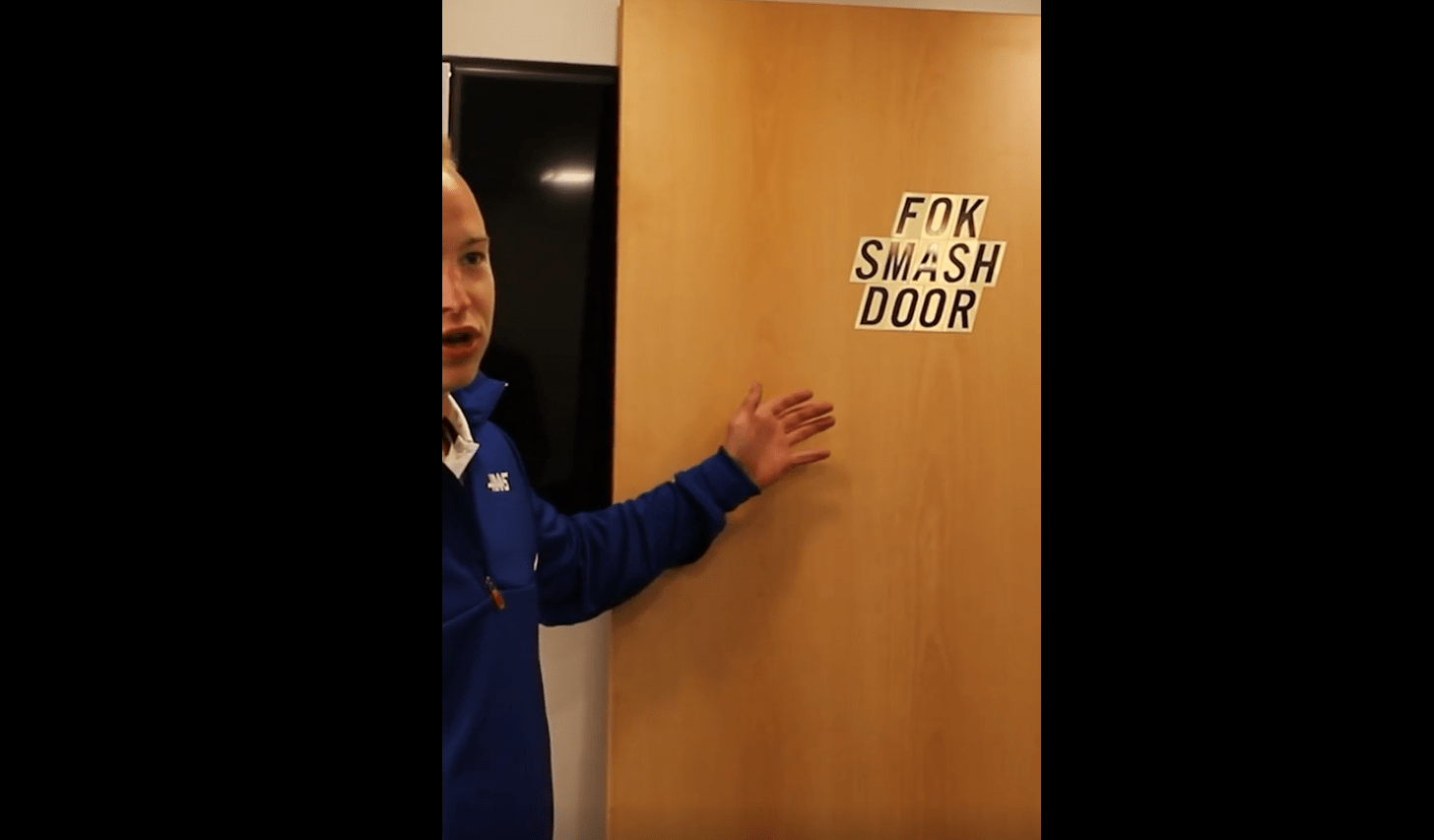 Nikita Mazepin took some help from social media and came up with ‘Fok Smash Door’ as a return gift for his Haas F1 boss Guenther Steiner.

After Steiner gifted Mazepin a ‘spinning top’ in line with his ‘Mazespin’ memes, the Russian asked on social media about a return gift for the Haas F1 chief. Majority of the answers was regarding the Netflix’ Drive to Survive moment from the 2019 season.

The incident took place during the 2019 British GP when Magnussen and Romain Grosjean came together on Lap 1, when Haas were working on solutions to their problems. The drivers were summoned to the office of Steiner in the paddock.

However, Magnussen, in a fit of rage, smashed the door of the office of Steiner, which didn’t sit well with the Italian. The moment of smash was not aired on the Netflix episode, but the subsequent moment of the swearing from the Italian and talks with the Dane’s trainer was.

It didn’t strained their relation as both had a good laugh later on. The memory was re-created by Mazepin ahead of this weekend’s Austrian GP, when the Russian brought a door to the office of Steiner, with ‘Fok Smash Door’ pasted on it.

Mazepin talked about being Russians being polite with return gifts, but Steiner was quick to note ‘you are Russian, but you are not polite’, while laughing. The Italian didn’t seemed too pleased, but took the gift in the right spirit, to call it an even.

On the Mazespin topic, Steiner noted last weekend that they are doing it to lighten the mood around Mazepin, who is having a difficult time on and off the track. The Russian talked about being a carrot after Styrian GP, especially with a heavy car.

When speaking to media including FormulaRapida.net, Steiner explained the situation, where he noted that they have a new chassis for Mazepin, but he won’t be able to use it before summer break. “I don’t want to go into the specific weight difference, it’s not very big,” he said.

“We built a new chassis maybe a month ago, I would say. The plan is not to have it in six or seven races, the chassis is planned to be with us after the summer break. So it slows him down. But it’s not a lot. On the chassis there is always a tolerance, and the chassis are a year old – they raced for a year.

“Normally, you make a new one every year and the chassis is never going to get lighter. So I think there’s a little bit of that and also the tolerance. It’s just a little bit higher, but not a lot,” summed up Steiner, as he added that Styrian GP troubles wasn’t down to the weight itself and more with blue flags on a short circuit.

Mazepin, though, had a slightly different view to Steiner. “I think the common perspective that you get on a pitwall is probably very different to what you feel driving the car for 73 laps,” he said in the press conference. Everyone is entitled to think, and they could be right.

“But I’m pretty certain that it does have quite a big impact because it offsets the weight distribution and then that offsets the set-up that you put in the car. So there are quite a few factors if you go into it from a mechanical perspective. However, I would say in the grand scheme of things it’s not unacceptable. It’s just making my life a bit more challenging. But I have a very good team of engineers who are helping me in my rookie year to understand and get it to work a bit better,” summed up Mazepin.