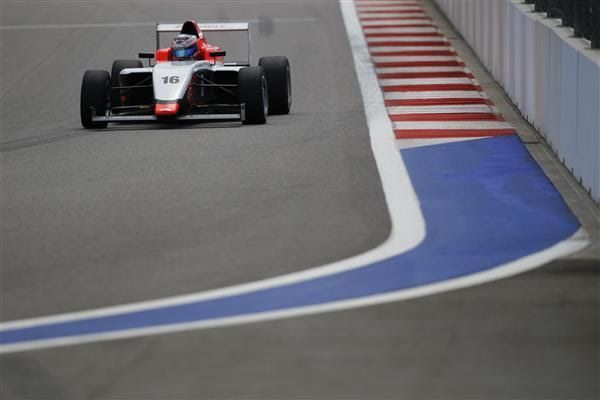 Dutch driver Jarno Opmeer made a race to remember today at Sochi for Race 2 of SMP Formula 4 NEZ championship. He started from the pole but a contact with compatriot Verschoor, obligated him to comeback. Russians Alexey Korneev and Nikita Sitnikov completes the podium.

When the light went off Jarno Opmeer took the lead of the race at turn two in front of Verschoor and Alexey Korneev who made a great start, Sitinikov was fourth in front of Rasmus Markkanen. Rasmus twin, Roope had to retire due to a crash with his compatriot Valtanen.

But the huge battle was in front where Verschoor tried to overtook Opmeer, but they contact, which was the end of the race for Verschoor. Opmeer spun but rejoined the race on third position.

Thanks to that, Alexey Korneev took the lead of the race in front of Sitnikov and Opmeer, Tujula was fourth when the safety car joined the track due to Maslennikov retirement.

When the green flag was back on track, Opmeer overtook the Russian Sitnikov for second position, as Tujula received the black flag due to not respect a prior black and orange flag. Jarno Opmeer continued on his way to retake the lead and he managed to pass Korneev.

The Dutch driver made a gap of 1.1 seconds, an enough gap to win the race today and to take the lead of the championship after a great performance. Second position for the sophomore driver Alexey Korneev as Nikita Sitnikov completes the podium.

Behind him in the last two laps, Vartanyan passed Rasmus Markkanen for fourth and final position.

Next race of SMP Formula 4 NEZ championship will be held at Zandvoort on 14 and 15 of May.