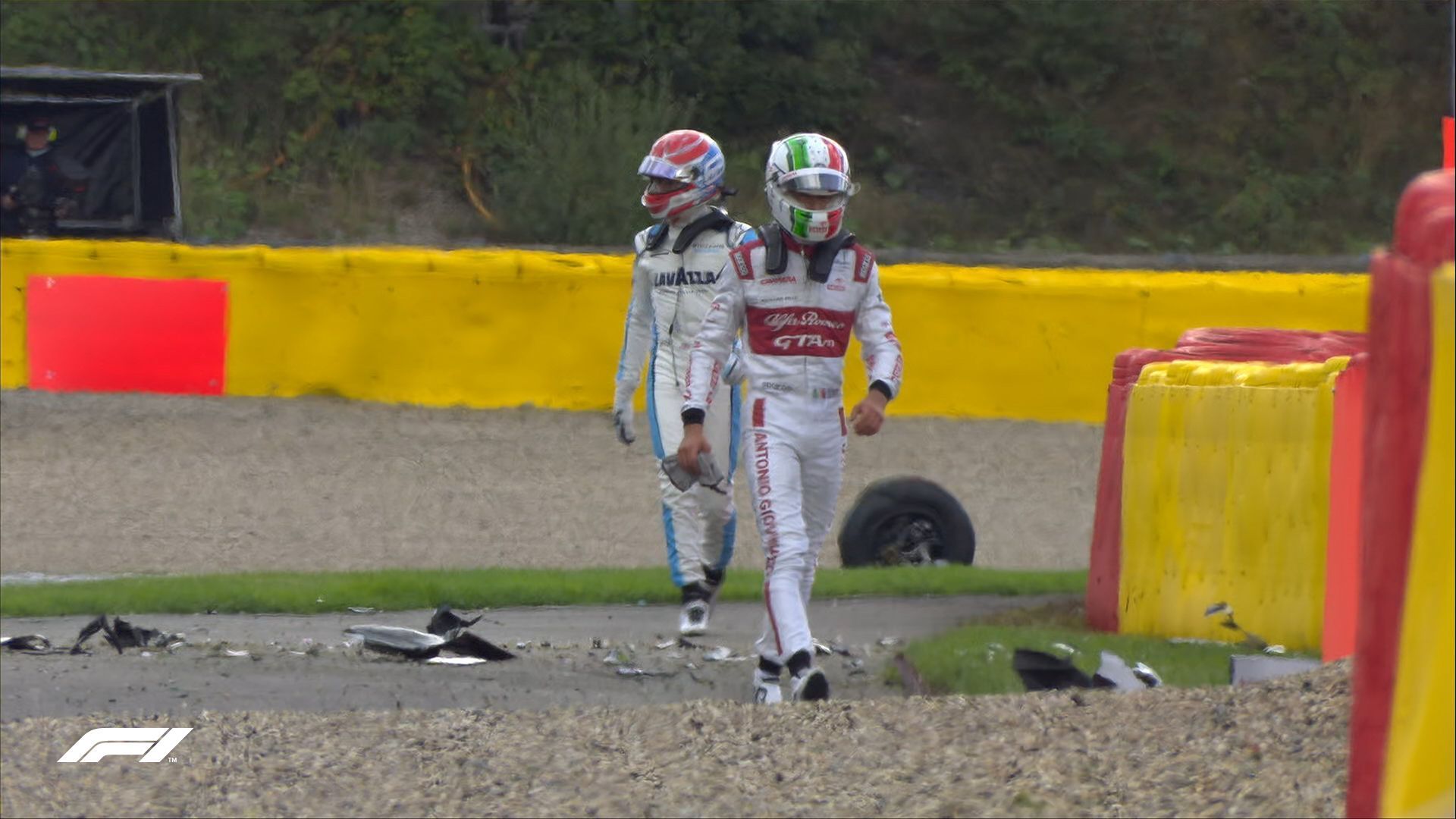 FIA F1 Racing Director Michael Masi says they are already investigating the failure of tethers and also the barrier following the incident between Antonio Giovinazzi and George Russell during Belgian GP.

The bizarre incident in F1 Belgian GP involving Alfa Romeo’s Giovinazzi and Williams’ Russell, saw the former hit the tyre barriers on the exit of Pouhon, before being rifled across the track, with his wheel also flying across the track, detached.

His flying wheel connected with the car of Russell, in such a way that it broke the Brit’s suspension, thereby taking him out of the race. This incident – again at Spa-Francorchamps after last year’s fatal crash – was of concern for a number of reasons.

For starters, the high-tech tethers on F1 cars intended to keep the wheel and suspension construction properly attached had failed, and more than this, the tyre barrier had rejected Giovinazzi, and sent him into the path of oncoming traffic, which is a major hazard.

Speaking on the former of the two issues, FIA F1 Racing Director Masi stated that his team are already on the case: “Yes, it is a concern,” he said to media including Racefans.net, Motorsport Network, BBC, Reuters and more after Belgian GP. “Why it became detached, I’m not 100% sure.

“But immediately once the car came back to the drop-off area our technical teams already started their investigation, taking a number of photos, and we’ve got all the available footage. So the FIA technical department together with the Safety Department will investigate why. I think it’s too early to draw any conclusions.

“With an incident like that I think you need to look at all the available data, and process it, and let the appropriate people have a really good look into the whole thing, the incident itself and what happened.” Masi, though, disagreed with the assessment that such failures of the tyre tethers are becoming increasingly common.

“I can’t say that I agree with that comment,” stated Masi. “But as I said earlier, with regards to the tethering and what occurred, it’s something that the FIA technical department and Safety Department will investigate in more detail to determine what’s happened. And then from there actually make an educated decision rather than a knee-jerk reaction, if any improvements are required.”

As for the matter of Giovinazzi’s car being propelled across the track, Masi promised that better, safer solutions will be investigated for that barrier and others like it, as the FIA continue their ongoing quest to improve safety in F1.

“From the FIA perspective, whenever an incident occurs, it’s always something that we look at and ways that we can improve any circuit,” said Masi. “So I don’t think it’s just a Spa matter. It’s every single incident and see what improvements can be made. The way that I put it, safety is something that’s alive, it’s not a start and finish.

“So it’s something that’s always improving something that we can always learn from and always make improvements. So we’ll have a look at it from that perspective and go from there. I’d have to have a look, being the close proximity to the end of the race, I haven’t had the opportunity to go out and have a look and see what the lay of the land is down there.

“But as I said, we’ll have a look at it overall and see what can be done, and if anything needs to be improved, what can be improved,” said Masi, who also explained that the reason the red flag was left unfurled in the dramatic accident was that marshals had cleared a path for drivers to take through the debris.