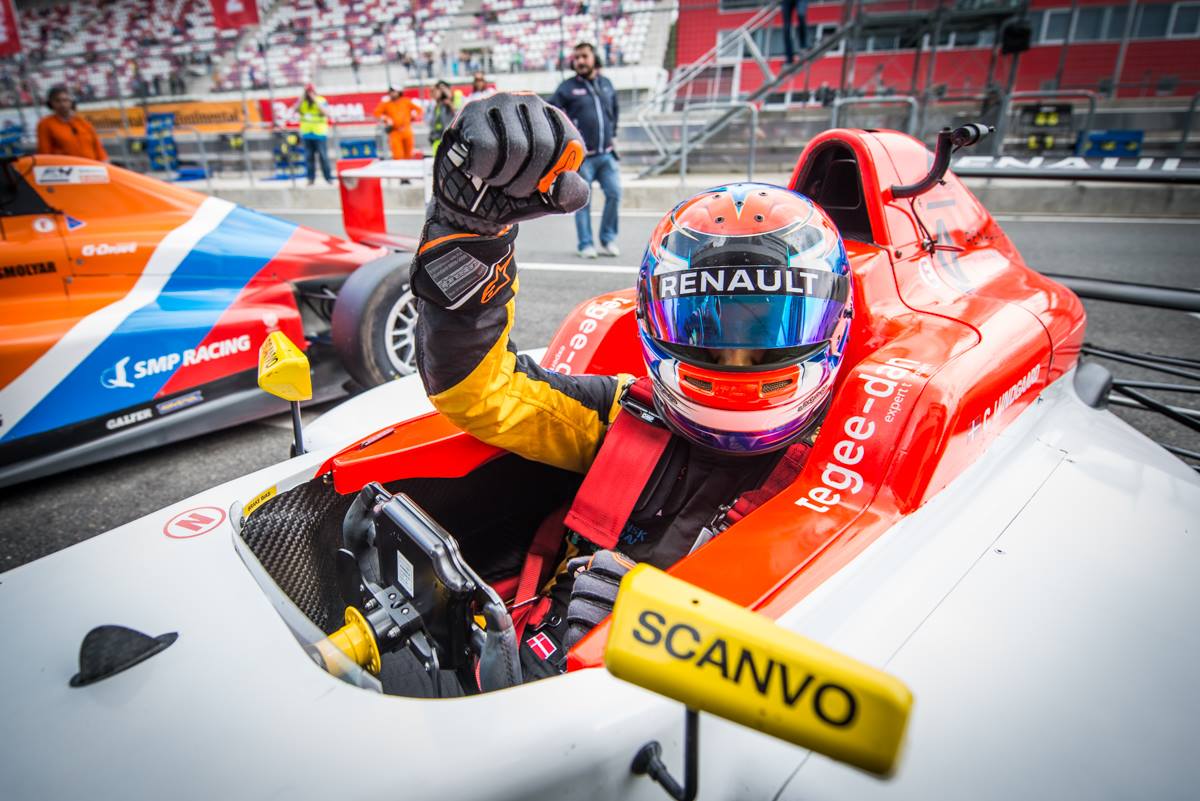 Final day of the race weekend started with a beautiful weather as the temperatures were up to 25 degrees. The tension built up straight in the morning as Christian Lundgaard had his first real chance of taking the title.

Lundgaard was once again the fastest driver in qualifying. The Dane was almost 0.2 seconds quicker than Tuomas Haapalainen, who managed to put his car in the front row. Vladimir Tziortzis continued his strong weekend setting the third fastest lap, ahead of Bent Viscaal.

Guillem Pujeu had a brilliant qualifying and finished the session onto P5. Mike Belov finished just ahead of Alexander Smolyar, who needed much better qualifying, if he was to delay MP Motorsport’s celebrations.

Juuso Puhakka, Lukas Dunner and Sami-Matti Trogen rounded out top ten. Rookie Lukas Dunner first had the fifth best time, however the young Austrian-native driver was penalized for track limits and dropped down to P9.

Just as it looked like Lundgaard would run away with his 10th victory of the season, the Renault Sport Academy driver made a very uncharacteristic mistake. The Dane misread the board shown for Gulhuseyn Abdullayev and served a drive-through penalty by accident. This unfortunate mistake dropped him down to P16 and Christian Lundgaard then started his cruisade to come back up the grid.

When Christian Lundgaard was taken out of the picture, Tuomas Haapalainen took full advantage of the situation and cruised into a very comfortable win. Tziortzis and Viscaal fought extremely hard for P2 and although Viscaal initially finished P2, he was handed a 3-second penalty for impeding Tziortzis.

Belov and Smolyar came home P4 and P5 before Pujeu who made an amazing overtake on Puhakka in the last corner of the last lap and took P6. Dunner finished P8 ahead of Nerses Isaakyan. Isaakyan’s performance, in former Lloveras car, was impressive considering this was his first race weekend in F4 NEZ this season after two years break. Nikita Volegov completed the top ten. Behing them, the fight was raging as well, between an Ivan Shvetsov in a very fast learning curve and an improving Ivan Berets, which gave the Russian spectator a fantastic show.

Even though he was not on the podium, the day ended in heavy celebrations for Christian Lundgaard and MP Motorsport as the Dane was crowned 2017 SMP F4 NEZ Champion despite his result. A superb season awarded the Dane the title he deserved.

Thanks to this important-points-scored weekend, Tuomas Haapalainen sits in P2 in the overall standings, 7 points in front a SMP Racing driver Alexander Smolyar.

There is still a lot to race for in Assen, as many drivers are still searching for their maiden win this season. We head to a two-month break now and return on 20-22 of October for the 7th and final round of the season.