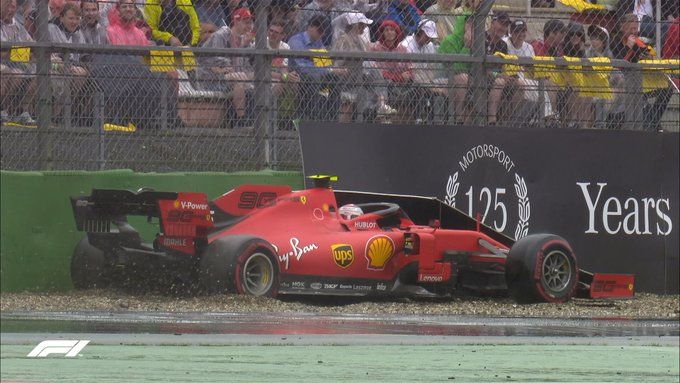 Charles Leclerc wasn’t too happy with the dragster tarmac in the final corner which eventually sealed his and few other’s fate including Nico Hulkenberg in F1 German GP.

The crazy F1 German GP at Hockenheim resulted in mixed emotions all-through the paddock, where some drivers and teams were joyous while the others sulked due to catastrophic results, which included the likes of Ferrari’s Leclerc and Renault’s Hulkenberg.

Despite starting from 10th on the grid, Leclerc pushed through in greasy conditions with the right strategy to be in the contention to win the German GP, while Hulkenberg matched the Monegasque to be able to fight for the podium positions.

However, luck wasn’t on their side as like some other drivers. The final corner in particular became dangerous with multiple drivers going off like McLaren’s Carlos Sainz and Alfa Romeo Racing’s Kimi Raikkonen to lose out on track positions.

But for Leclerc and Hulkenberg, it was a race-ending one as a slight moment on the wet tarmac run-off was enough to push them onto the gravel bed, much to both their disappointments. In between, Mercedes’ Lewis Hamilton nearly beached himself as well.

While accepting his mistake, Leclerc was unhappy with the dragster-like tarmac – the ones used for drag races – which he reckons is unacceptable in F1 as he had no grip on it to save himself, while Hulkenberg basically called it like driving on ice.

“It was a crazy race and a big mistake from my side,” said a dejected Leclerc. “I am very sorry for the team and the fans. I think it was a great race until the mistake but one mistake is enough to be out of the race which was my fault.

“I need to understand what happened. Looking back at the mistake, it was tricky conditions, you very often lose the car in such conditions but I ma not convinced about the tarmac in the last two corners.

“This is no way an excuse of my mistake and I take full responsibility of it but we are in F1 and these type of tarmac is unacceptable to me. It wasn’t like I went stupidly quick out of the track, it was just a small snap and I had to take the car back.

“But I couldn’t on the dragstar-like tarmac. I am happy overall if you look at the performance in the weekend, but then there were many things that didn’t go our way and this we have to improve for the next races.”

He lost big points and maybe another shot at his maiden win, while teammate Sebastian Vettel made to the podium in second after starting from 20th. In a similar position like Leclerc was Hulkenberg, on whom Renault pinned hope after Daniel Ricciardo’s DNF.

The Australian retirement cause was put down as an exhaust trouble as Renault returned empty handed in a grand prix where most of their rivals scored big, which included a podium for Toro Rosso, which brought them in the fight for fourth place.

“It was an eventful race and a fun one for most part of it but just one little moment to the entry of Turn 16, I lost the car a little bit with a damp track with tyres that are degrading which is quite normal,” said a disappointed Hulkenberg.

“I came next to the track which I wanted to use it because I was going to spin but that black tarmac next to the track is basically like ice and I wasn’t aware of that and once I was there, that car was just skating off into the wall and I had nothing to do.

“It was special circumstances for Renault to be up there but I think you can see where we are as you saw in the dry qualifying but races like these you have to make it count when opportunity is presented itself.

“I am just gutted for me and the team that we couldn’t make it stick, especially in front of my home crowd as well, so it hurts now and it will even more on Monday but on the bright side, we will be back in the car in few days time in Hungary.”