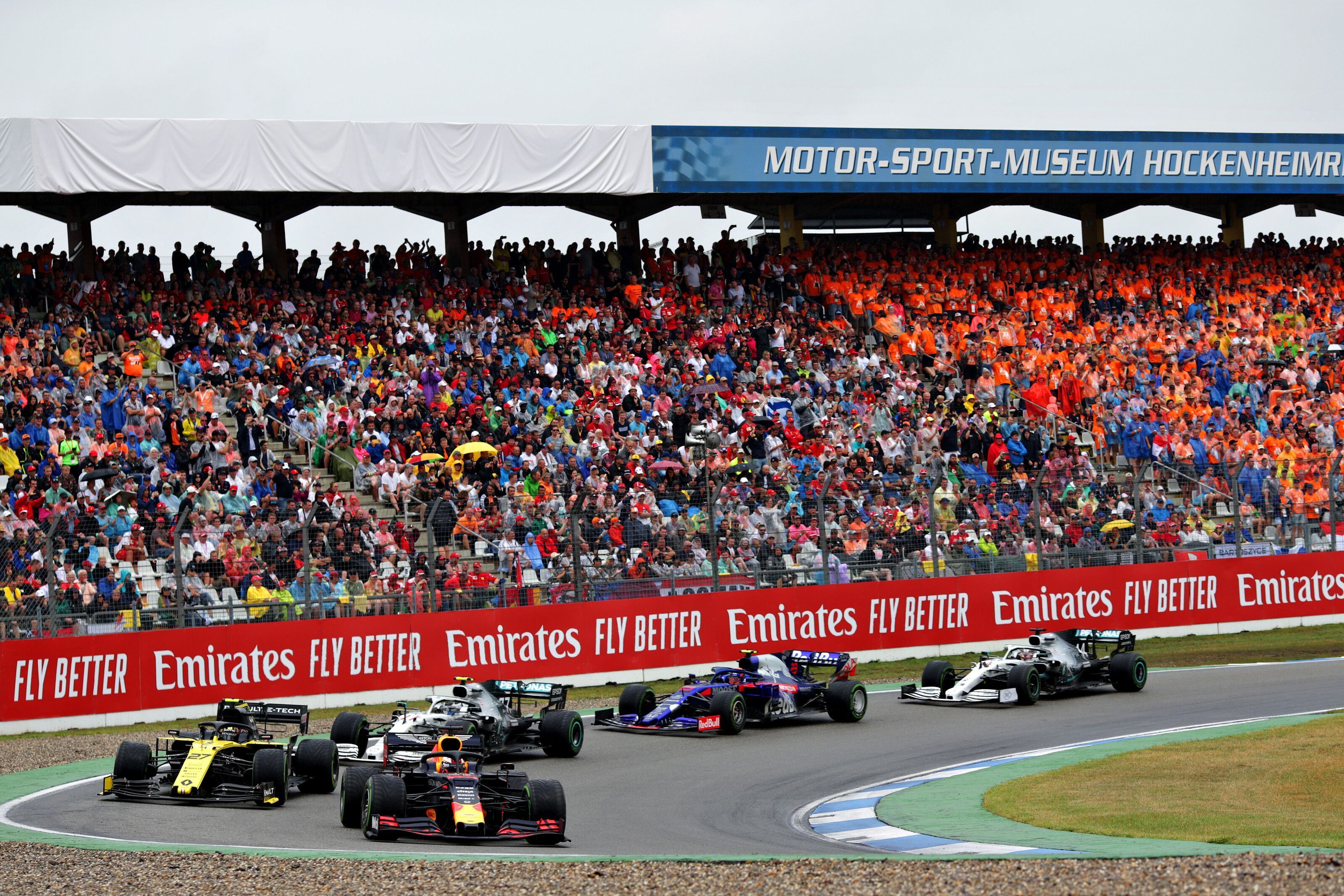 As expected, it was a wet start to F1 German GP at Hockenheim – the 2019 season’s first wet grand prix as the drivers drove behind the safety car for extended formation laps in the new procedure, where standing start would happen.

Three laps were taken off from the 67 to make it a total of 64 as the German GP got going with Mercedes’ Lewis Hamilton leading the way from Valtteri Bottas and Alfa Romeo Racing’s Kimi Raikkonen after a slow start for both Red Bull Racing cars.

Max Verstappen dropped back and so did Pierre Gasly as Renault’s Nico Hulkenberg picked up the places along with Ferrari’s Charles Leclerc in the front half of the field. As they tip-toed on the wet surface of Hockenheim, the safety car was back out again.

Racing Point’s Sergio Perez spun at Turn 9 to crash out as plenty of drivers dived into the pits for intermediate. There was an unsafe release by Ferrari for Leclerc in front of Haas’ Romain Grosjean but surprisingly they were only fined for the incident.

At the front though, Hamilton led the way from Bottas and Verstappen as Leclerc moved into fourth from Hulkenberg with Raikkonen moving up to sixth ahead of Ferrari’s Sebastian Vettel, who made his way up to seventh from 20th on the grid.

It included his charge on the opening lap, where he gained six places to be 14th. The rest of the Top 10 had McLaren’s Carlos Sainz eighth, Toro Rosso’s Alexander Albon ninth and Alfa Romeo’s Antonio Giovinazzi but the order didn’t remain the same.

Sainz had an off in the final corner but managed to re-join as Renault’s Daniel Ricciardo retired due to an engine failure causing a VSC period which prompted Leclerc and Hulkenberg to pit for another set of intermediate tyres.

On re-start, Hamilton led the way from Bottas and Verstappen as the Dutchman pushed hard to get by the Finn, while Leclerc started to close in on them with Hulkenberg regaining the lost position to Raikkonen to be fifth as Vettel remained behind them.

There was more drama to come when drivers started to come in for the slick compound as McLaren’s Lando Norris retired to a hydraulics issue where Racing Point’s Lance Stroll spun as well. Before the drivers got the slicks running, it started to rain as well.

It was catastrophic for Leclerc though as the Monegasque slipped off in the final corner on the puddle to retire from what looked like his first win as Hamilton also had an off in the same corner to lose the front wing and pit straightaway for a change.

He missed going to the right of the bollard for which he handed a five second penalty. A slow stop under the safety car dropped him to fifth as he was put under investigation again for driving unnecessary slow behind the safety car.

At the front, it was Verstappen leading from Hulkenberg with Bottas slotting in third after having to pit for the intermediate tyres as Albon was fourth from Hamilton. Behind them, it was Sainz in sixth with Raikkonen seventh from Vettel, Gasly and Giovinazzi.

As the race settled in, Verstappen continued to lead as Bottas and Hamilton moved into second and third after clearing Hulkenberg. The German looked good for fourth place and a podium if something happened in front but not for long.

He went off in the same corner to retire with the safety car being deployed again as others pitted for a fresh set of imtermediate tyres. It was Verstappen leading from Bottas, Hamilton, Albon, Sainz, Gasly, Raikkonen, Giovinazzi, Kvyat and Vettel in the Top 10.

Raikkonen had an off before Hulkenberg to drop behind Vettel and Gasly but the former pitted for a fresh intermediate to drop back. The re-start had Verstappen in the lead but Hamilton was in close quarters with Albon, Sainz and Gasly.

The Thai racer lost out to drop in eighth with Sainz in fourth from Gasly. The order changed though with host of drivers pitting for slick tyres as Stroll led the German GP for a brief period after Racing Point’s strategy to pit for soft under the safety car.

Verstappen took the lead with Stroll in second from Toro Rosso’s Daniil Kvyat with Bottas in fourth ahead of Sainz. A fightback from Albon allowed him into sixth with Magnussen in seventh ahead of Gasly, Vettel and Grosjean in the Top 10.

Raikkonen, meanwhile, dropped to 11th with Hamilton in 12th after serving his five seconds penalty. In the push to get back in the points, Hamilton had a big spin at Turn 1 but kept the car track – although he lost out to Giovinazzi as a result.

There was more bumping as Haas drivers continued to fight each other and made a contact as well. Up front, Bottas crashed out at Turn 1 for the safety car to be deployed again when the Finn lost his rear to clout the barrier, with Hamilton running last.

The re-start had Verstappen lead the way from Kvyat and Stroll as Vettel cleared Sainz for fourth, with Albon running in sixth from Gasly, Raikkonen, Grosjean and Giovinazzi in the Top 10. It wasn’t the same when Gasly tangled with Albon to crash out.

The Frenchman moved to the right on the exit of the hairpin with the Thai also going in the same direction to be hit from behind. At the same time, Vettel cleared Stroll and Kvyat to move into second as Verstappen eased into to win a dramatic German GP.

It was a good result for Honda as well with a double podium finish for the first time in the hybrid era. Behind the Top 10, it was Stroll in fourth, registering his and Racing Point’s best result with Sainz finishing fifth ahead of Albon, who scored his career best result.

The Thai racer, though, is under investigation along with Gasly, who was classified 14th despite not seeing the chequered flag. Behind Albon, it were the two Alfa Romeo drivers with Raikkonen and Giovinazzi in seventh and eighth respectively.

The Haas drivers came through in ninth and 10th with Grosjean ahead of Magnussen, but they are under investigation as well. Hamilton caught the back of Magnussen but had no laps left to end up 11th – his first non-points finish of 2019.

Amid all the humdrum, the two Williams kept their reliability record to be 12th and 13th with Robert Kubica finishing ahead of George Russell – the duo registering their best result of the 2019 F1 season.

UPDATE: Both Raikkonen and Giovinazzi are in danger after their cars were put under investigation for non-compliance with the race start date.