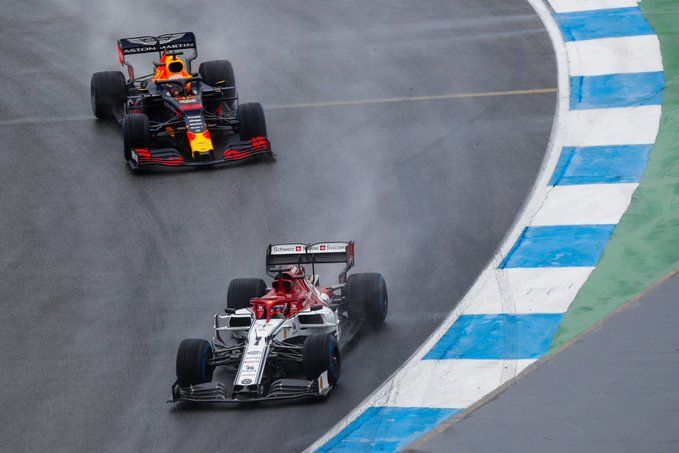 Soon after the thrilling F1 German GP at Hockenheim, the FIA sent out a note where they confirmed about putting Alfa Romeo drivers Kimi Raikkonen and Antonio Giovinazzi under investigation over non-compliance during race start.

It referred to Article 27.9 of Sporting Regulations and Article 9 of Technical Regulations. The stewards called the team representative in to clarify on what actually happened. The issue was related to driver coaching on the formation lap.

Basically, the stewards found that the torque in the clutch at the start did not match the torque demand as the driver released the clutch within the specified 70 millisecond maximum period. The time was measured at approximately 300 milliseconds.

It was deemed as a false start when the race got going after few laps behind the safety car with the same procedure of a standing start. The stewards noted the unusual weather conditions which the team presented as their argument but it didn’t sit since no other team had that issue.

Kimi Raikkonen receives a 10-second stop and go penalty for the breach of Article 27.1 but because he could not serve the penalty. The FIA decided 30 seconds should be added to the race time. pic.twitter.com/V4chewagWs

Antonio Giovinazzi receives a 10-second stop and go penalty for the breach of Article 27.1 but because he could not serve the penalty. The FIA decided 30 seconds should be added to the race time. pic.twitter.com/A70z4K5u5N

Following the deliberations, the FIA stewards handed 30 seconds time penalty to both Raikkonen and Giovinazzi for the F1 German GP, where they originally finished seventh and eighth. They received 10s stop and go penalty but it converted to 30s each.

It helps both Haas drivers to gain two more places and score more points. Romain Grosjean moves to seventh and Kevin Magnussen is eighth, with Mercedes’ Hamilton eventually scoring points in ninth ahead of Williams’ Kubica.

The latter opened his and team’s account for the 2019 F1 season, with George Russell just missing out. The Polish driver scored his first point since the 2010 Abu Dhabi GP, while Williams registered its first since the 2018 Italian GP.

Speaking on the penalties, Alfa Romeo team principal Frederic Vasseur said along with the intention of appealing the decision: “It is extremely disappointing to have both cars penalised and pushed out of the points in what had been such an exciting race.

“The situation arose during the laps we spent behind the Safety Car ahead of the standing start: we suffered a dysfunction of the clutch that was beyond our control and we will further investigate the issue. We respect the FIA’s process and the stewards’ work, but will appeal this decision as we believe we have the grounds and evidence to have it overturned.

“In this regard, we will be in touch with the FIA soon. Kimi and Antonio drove very well in challenging conditions and seventh and eighth place were the rightful reward for their performance.

“The team worked really hard to put both cars in the points and we showed once again that we have the pace to fight at the sharp end of the midfield. This race was a great showcase for Formula One and it’s a pity it ended this way.”

The stewards also cleared Hamilton and Gasly for any further action in their respective investigations. In case of Hamilton, it was made clear that he did not drive unnecessarily slowly behind the safety car but the circumstances were like that which triggered the call.

German GP: Verstappen wins from Vettel and Kvyat in a chaotic race