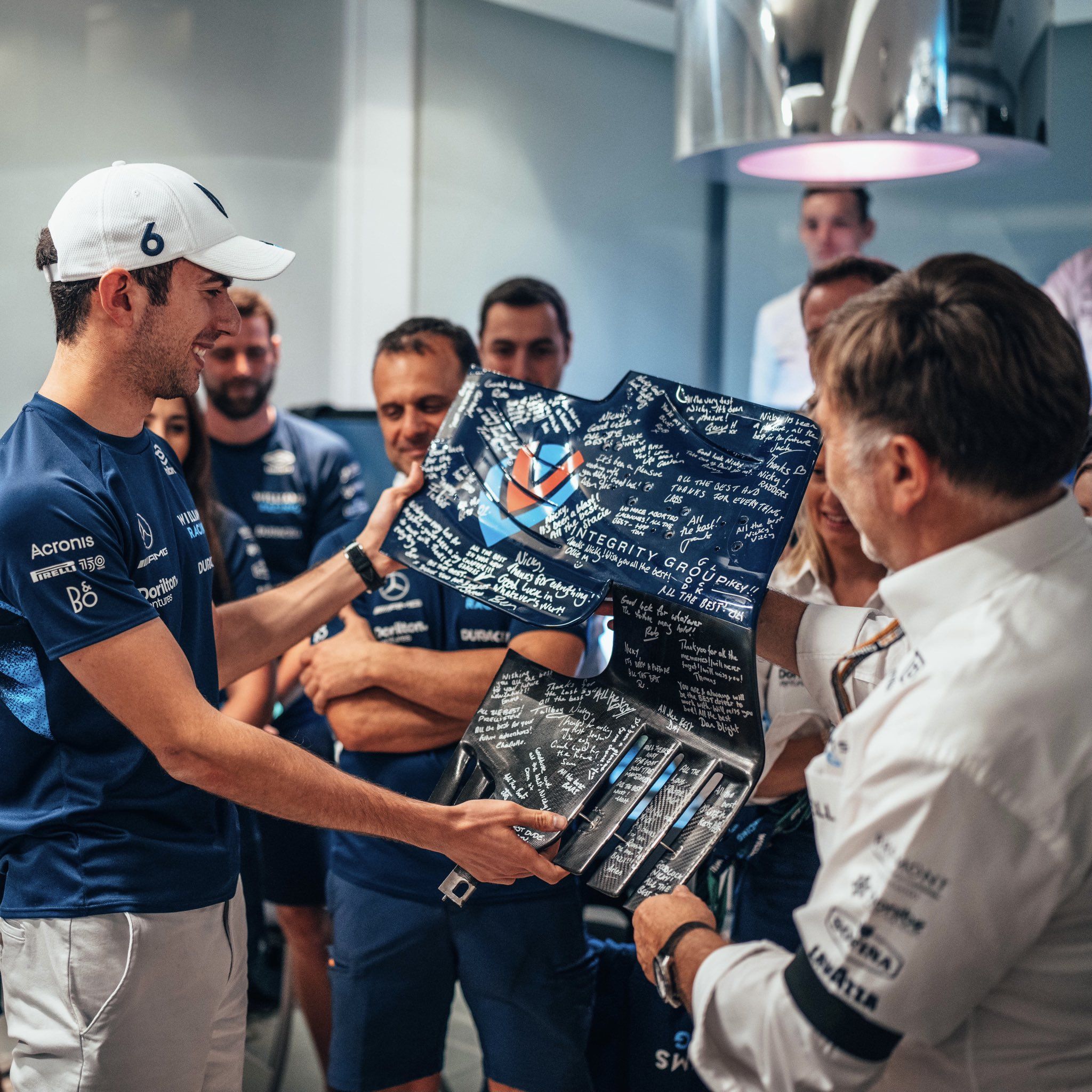 Nicholas Latifi has penned a blog about his last weekend in F1 in Abu Dhabi where he talks about the race and off-track moments.

It wasn’t the end that Latifi wanted in Abu Dhabi after a collision with Mick Schumacher and a subsequent electrical problem. The Canadian couldn’t bid goodbye on the radio even as Williams did not renew his contract with his seat going to F1 debutant Logan Sargeant.

Latifi alluded to a difficult years in F1 which just didn’t work on his last weekend but overall he had respect from his rivals on the grid. He penned down a blog talking about his last weekend with Williams and spending quality time with people he has worked with.

He also added about the drivers’ dinner for Sebastian Vettel and moments spent with all them after the initial idea from Lewis Hamilton. So much so that he, Alexander Albon and George Russell went to the same restaurant after the Abu Dhabi GP weekend.

“Since the Abu Dhabi Grand Prix I’ve had people ask me whether it was an emotional weekend – seeing as it was perhaps my last in F1,” started Latifi. “So, here are my thoughts. The truth is there were a lot of different emotions. Most of all though, I wanted to try and enjoy it as much as I could and make the most of the opportunity. I didn’t want to sweat the stuff that had been causing me frustration or stress during the season.

“Instead, the usual pre-race Thursday routine became a series of moments to savour. The media day interviews, engineering briefing, track walk and just working with my team at Williams – people I’ve developed really good relationships with. They were all really nice moments. Thursday night was special too, with a GPDA dinner to celebrate Seb’s career. It was originally Lewis’s idea to organise it and all 20 drivers were there.

“We had fun joking and sharing stories, the conversation flowed easily and we swapped seats between courses so we all caught up. There were photos, Seb said a few words and it felt really cool to be there. There was a great sense of camaraderie around the table. On Saturday morning I joined the team’s regular team talk session, where Jost gets everyone together to run through the latest news and developments. I took that opportunity to say a few words as I wanted to express my thanks.

“For sure, life at Williams has been difficult for me at times, and it has been difficult for the team, too. We’re all trying to get the most out of the car, and they’re making sacrifices, putting in long hours, traveling away from their families. I wanted to thank them for their efforts and wish them luck for the future. They deserve good things, and often results don’t reflect the effort being put in. Before the race, my engineer said a few kind words which was nice, and before jumping in the car there were hugs with the team on the grid just to say thank you.

“I started cautiously, but in the end my race was run after the impact from Mick’s car. The rear wing was damaged but ultimately it was an electrical issue that forced my retirement. Definitely not nice to finish the race like that – especially so close to the end. It was a muted end in every sense. The electronic problem meant I couldn’t even talk to the team on the radio…

“My girlfriend Sandy is one of my biggest supporters, and she was there when I got out of the car, and she joined me for the various media things I had to do post-race. The post-race debrief was an opportunity to reiterate some of the things I said at the team talk to the guys back at the factory who play just as big a role. Whether it’s my personal strategist, or my tyre engineer, there’s a lot of people working hard in the background.

“At the end of the debrief, there was a surprise when most of the team came into the engineering office to present me with a signed rear-wing endplate from the Hungarian GP car that I drove to my first points in F1. It’s very cool! During pack up I gave away some pieces of my race kit to people in the team who were my core number six car group. There were a few heart-to-hearts as I said my goodbyes, in my own way and on my own terms. I left the track quite late, because that was a slow process. But for me, it was hugely important. I didn’t want to rush it.

“Finally, I joined Alex and George for dinner. We went back to the same restaurant where we had the drivers’ dinner because we enjoyed it so much. Our small group turned into a massive group and it was a great night. Sandy and I hung out in Abu Dhabi for a few days afterwards, and then came back here to London. What’s next? Let’s see. I’ll keep you posted,” summed up Latifi.

Here’s Nicholas Latifi on 2022 deciding his fate in F1

Here’s drivers get together in Abu Dhabi for Sebastian Vettel