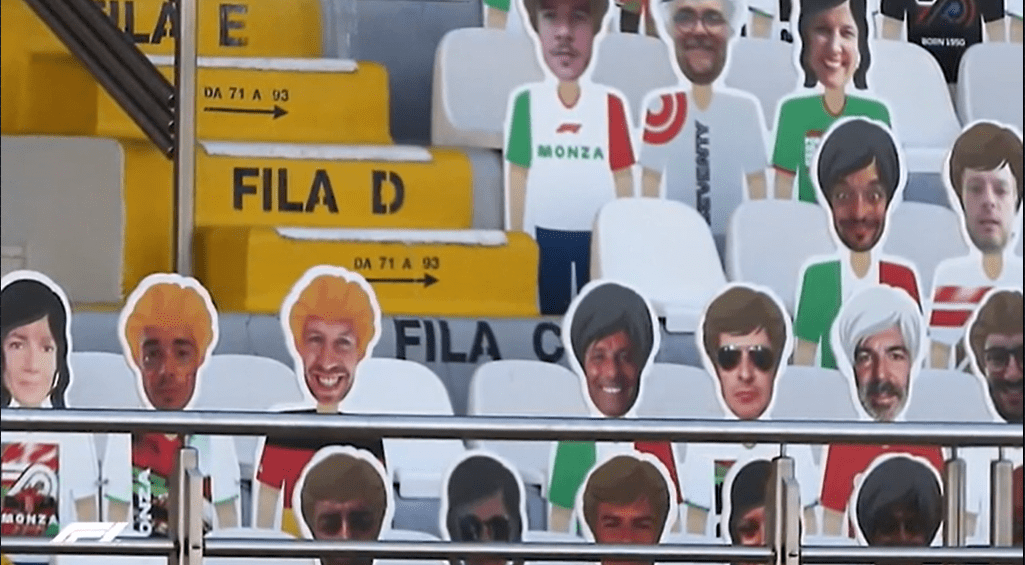 The Friday of F1 Italian GP was hectic for teams as Mercedes seems clear favourite while two Red Bull-backed teams are close ahead of others.

In a somewhat bizarre day at Monza to start F1 Italian GP weekend that included many scrappy performances by various drivers, Mercedes once again reigned supreme, changing roles from session to session at the very top of the timesheets, with Lewis Hamilton assuming P1 for the afternoon session.

The six-time champion explained that the car’s progression throughout the day satisfied him, as it became increasingly competitive as the day went on, though further steps are still required. “The car didn’t feel great in the first session but in the afternoon, it felt like we made some encouraging improvements and it was much better,” said Hamilton. “We have a few more steps to make overnight and then I think it’ll be where it needs to.

“It’s quite a bumpy track here and with the low downforce, there’s a lot of sliding. You need to find the right balance with the bumps and between the low and high-speed turns. The field is typically a lot closer here, compared to Spa, as it’s such a fast lap and there aren’t many corners. Valtteri’s quick here, too, so it’s going to be a fun battle.

“It’s going to be interesting in Qualifying, obviously we didn’t get our final lap in last year and I think the last corner will be a bit of a nightmare with everyone trying to get a gap, so it’s going to be hard work,” said Hamilton, who also talked about minimum laptime for slow laps in qualifying which is believed to be a 1m43.000s as Valtteri Bottas explained that his car was consistently fast, though it too will require tweaks.

“Very race-y indeed” were the AlphaTauri cars, to phrase it as Sky Sports F1 commentator David Croft did during FP2, as Pierre Gasly and Daniil Kvyat impressed to be P6 and P4 in FP1 and P4 and P7 in FP2. The Frenchman’s time of 1m21.121 in FP2 was the fastest either of the team posted at any point.

“It was by far the best Friday since the start of the season,” said Gasly. “I must say the feeling in the car was really good! I could push and managed to put in some good laps. Unfortunately, we had a small issue with a damper at the end of the session while doing the long run, so we had to stop a bit earlier than the others, but generally speaking, we are pretty happy.

“The low downforce set-up that we have here in Monza works quite well, but I feel like we can still improve a bit. I think there will be a few surprises with the new engine mode rules, so we’ll see. It’s very tight and, especially here with the tows in Qualifying, it will be important to get it right. I mean, we were surprised even to see ourselves right up there.

Kvyat, meanwhile, said that he made progress in a diverse array of areas, though he wished for more in short runs. The uncharacteristic pace of AlphaTauri was such that they enjoyed the pleasure of having at least one car ahead of Red Bull, who did not have a straightforward day as they complained of balance issues.

Max Verstappen had scrappy first F1 session that included a minor crash as he ended up P5 in both the sessions, with his teammate a distant 14th in FP2 – due to track limits deletion – but ahead of him in third for FP1. The Dutchmam expressed some discomfort with his RB16, as he explained that he still chases a better balance.

“We are struggling with general balance and grip today so we have quite a bit of work to do and it wasn’t the best start to the F1 weekend,” said Verstappen. “We were all trying to find the limits out on track and at Turn 11 if you have a bit of a moment then it is better to just let the car run wide as it doesn’t really matter during practice, which is why lots of us were having times deleted.”

Alexander Albon, meanwhile, said that there remains work for to be done in corners of extreme speed, but that medium speed corners are in a good place as it stands. Another team to benefit from the lackluster showing of Red Bull was McLaren, who – after a mediocre FP1 – pulled together their act in FP2, to come P3 and P6 with Lando Norris and Carlos Sainz respectively.

Norris, though, had a particularly peculiar day, as a mysterious issue slashed his running time in FP2, leaving him to only do qualifying, and truncated race runs. The Brit stated that as a result, he feels unprepared for Sunday, though he has confidence for Saturday after that inspiring result.

“Not the best Friday just because of the lack of running,” said Norris. “We didn’t really get the chance to do any high-fuel runs, so we’re not in the best position. We’re in good shape for, but we’re still a bit behind in our prep for Sunday. So, we might have to compromise FP3 tomorrow to try to fit in some more high-fuel runs and catch up,

“I have a decent feeling for the car, but this is the track where you want good confidence throughout the lap – you want confidence under braking and in the high-speed corners, and I’m not quite as confident as I could be today due to the lack of laps.” On the other side of the McLaren garage, Sainz said he was encouraged by his pace on what he called a ‘decent Friday’ at Monza.

Without a decent Friday to derive satisfaction from was, however, Ferrari, who spent the duration of their day on the cusp of the top ten, in which only one of their cars sat in any of the sessions, that being Charles Leclerc who came P9 in FP2.

Of their day, Sebastian Vettel explained that the car was a handful for much of the day’s running. He also stated that their car is most lacking pace is on the straights and on corner exits. “Well the car is difficult to drive, but as I said, it’s not the first time,” he said. “So where are we lacking? I think we’re losing down the straights, which is expected.

“But in terms of where we want to have, you know, a better car to drive is, you know, we’re lacking grip on corner entry. Pretty much all four wheels, the car is sliding quite a lot. And it’s like you said it’s a handful. But yeah, it’s very difficult to get everything right to get the lap together. But we’re trying to make it a bit better. I think part of a contributer for that in the race is obviously the balloon pressures that we are forced to run at, so that doesn’t help, it’s far away from where I think the tires would like to run.

“But we have to obviously stick to stick to the rules and apart from that, it will be a tricky one in the race.” Teammate Leclerc is eyeing Q3 after looking at his low-fuel run which is somewhat encouraging from his end, even though he knows the F1 grand prix will be a struggle. Elsewhere on the grid, Racing Point continued their somewhat disappointing form, both drivers were in agreement that more pace needs to be found overnight, though of the pairing, Sergio Perez was more satisfied, as he called it a good start to the weekend.

Expected to improve their position as the day progressed, though, Renault failed to do so, in part because one of Daniel Ricciardo’s faster laps was deleted, as were many others throughout the day. And, even though his performance was not stand-out as anticipated, the Australian F1 driver was happy with the productivity of the day, adding that the car was comfortable off the bat. Esteban Ocon, too, was satisfied, as he pointed out that there is little to lap times on practice days.

To some extent, the Alfa Romeo Racing F1 drivers were more competitive, and the faster of the pair, Antonio Giovinazzi, labelled it a positive day, and one during which he understood that qualifying laps will be highly dependent on the tow. Kimi Raikkonen, meanwhile, said his day was an average one, which was hampered by his inability to string together a clean lap – something he says will be a major factor on Saturday.

Further down the order, Haas had an ordinary day, and though pace was lacking, both Romain Grosjean and Kevin Magnussen were happy to get productive running in, the former especially given past races at which he hasn’t been so lucky. Williams welcomed a new driver to their ranks for FP1, by the name of Roy Nissany, who – after his outing – said that he felt he had improved since his last FP1 cameo at Barcelona.

He also spoke on the emotions associated with such an experience. One of the F1 team’s full time drivers, Nicholas Latifi, meanwhile, said that the car is draggy, and that it is ‘not in the window’ he wanted it to be in. George Russell added that an extreme set-up choice they made resulted in little improvement, and that the circuit’s characteristics work against them as he had multiple laps deleted at Turn 11.

Outside the on-track action, there was nice gesture from Vettel, who used Monza circuit’s FaceForFan idea into use as he bought his as well as 76 Ferrari F1 team members’ avatars to be put up on the grandstand. Leclerc had already bought it before the grand prix.

The proceeds of the same will be put in use in charity with Monza already having loads of spaces booked with fans’ faces. On the other hand, the FIA revealed about two new positive COVID-19 cases from the latest round of testing done pre-Italian GP.

Between August 28 and September 3, the FIA performed 5,704 tests in all, of which two came back positive. As per their rule, they did not reveal who they were but it is believed that they weren’t from the F1 teams side. This adds to the five prior to make it seven in all.

“I didn’t know I wasn’t aware that Monza is planning something like this,” said Vettel. “I was told on Thursday and I thought it’s a nice thing to do chasing around last night and taking pictures of everyone. I hope they put us together so yeah that would be nice so we’re all next to each other.”

Nice Friday spent with Seb in the grandstands watching ourselves driving around in circles. pic.twitter.com/G3x9diVoYe