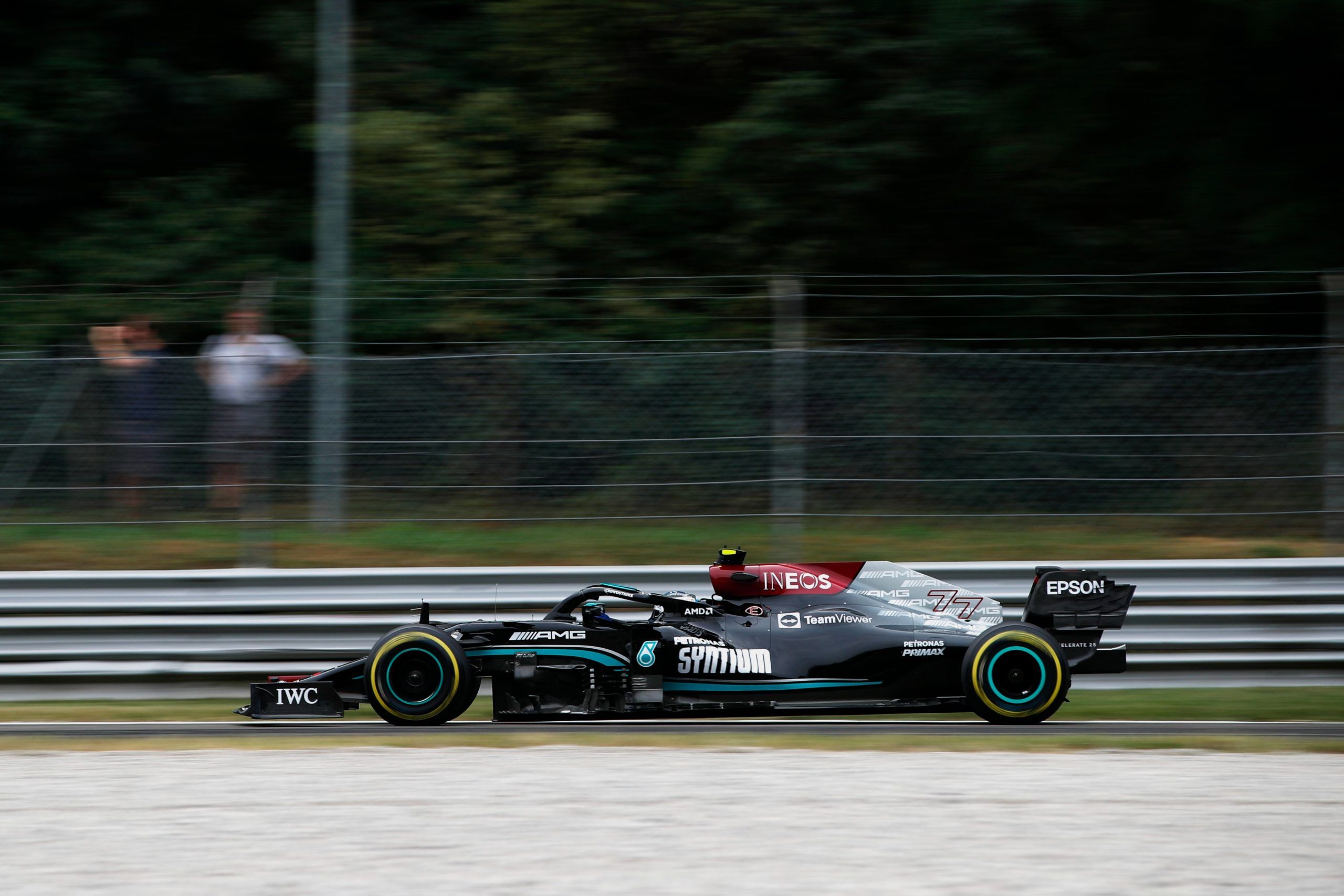 The first part of the F1 Italian GP qualifying saw major track evolution as tow factor of Monza continued to play a big part. With only soft tyres to be used in the Friday qualifying of the Sprint Qualifying weekend, Ferrari duo started the session on a used set.

Amid frustrations from many due to the slow outlap, Mercedes were 1-2 comfortably, with Lewis Hamilton (1m20.543s) heading Valtteri Bottas (1m20.685s), as Red Bull’s Max Verstappen (1m21.035s) needed extra running to be third.

A pitlane incident between Ferrari’s Charles Leclerc and Haas’ Nikita Mazepin was noted by the FIA stewards, where the Russian was released in front of the Monegasque. Another Turn 6 incident between the Haas driver and Alfa Romeo’s Robert Kubica was noted.

It looked like a mess towards the end, but everybody made it on time to start their final lap. Hamilton and Bottas retained their Top 2 spots, but McLaren’s Lando Norris (1m20.916s) improved to push Verstappen to fourth and take third.

But a lap deletion for AlphaTauri’s Yuki Tsunoda (1m21.973s) for track limits at Turn 11, dropped him to 17th behind Latifi, which promoted Russell to Q2. Replays also showed a rabbit/hare crossing the track, just missing Latifi in the process.

The second part in F1 Italian GP qualifying had more pace from Mercedes, with Hamilton dipping into the 1m19s to set a 1m19.936s lap to lead the way from Bottas (1m20.032s) and the McLaren pair of Norris (1m20.356s) and Daniel Ricciardo.

Their main rivals were only seventh and 10th, with Verstappen ahead of Sergio Perez, but more than half a second behind Mercedes. While the wait for the final run continued on, the FIA released details of Mercedes taking a fourth power unit for Bottas.

With all the new parts taken, Bottas will start from the back of the grid on Sunday. Back to qualifying, it was pitlane mayhem, with cars being released right-left-center. The FIA noted that it would be investigated after the qualifying session.

At the front, Hamilton led Bottas, with Norris ending up third again from Verstappen. In the bottom half, both the Aston Martin and Alpine drivers were knocked out amid traffic. They were in a two-by-two order for Saturday’s Sprint Qualifying.

With Ricciardo in fourth, they pushed Bottas to fifth. Things changed on the second run, especially from the Finn’s side, who smashed the live timing to end up the fastest and top F1 Italian GP qualifying on Friday, with a 1m19.555s lap to head Hamilton (1m19.651s).

The Monegasque was relieved to have ended up eighth after early troubles with MGU-K. The Top 10 was eventually rounded out by Perez (1m20.611s) and Alfa Romeo’s Antonio Giovinazzi (1m20.808s), who had another Top 10 finish in qualifying.

UPDATE: The stewards noted no further action in the Mazepin impeding Kubica incident, wherein they reckoned that either side did enough to caution their drivers and ask them to be vigilant of the traffic during Q1 of the F1 Italian GP.

“The Stewards heard from the driver of car 9 (Nikita Mazepin) and team representative, reviewed timing data, video and team radio evidence,” stated the stewards note. “The driver of Car 9 drove the relevant lap in a time of 2:05.381. This is considerably slower than the 1:43.000 guide time set in the Race Director’s notes. However, the driver explained that he was stopped by the several cars ahead of him that were driving very slowly and this left him unable to drive any faster in Turn 6.

“The Stewards reviewed the video and the team radio and agreed that both the driver and the team did everything reasonable to avoid affecting any other driver. Therefore, the Stewards take no further action.”

Additionally, the stewards handed fines to both Aston Martin and Alpine for the pitlane incident. For the former, it was against Vettel’s unsafe release in front of Hamilton, while the latter was for a team member found working in an unsafe manner.

They both were fined 5,000 euros each. “The Stewards heard from the team representative and reviewed video evidence. Several cars were released into the pit lane at the same time. The driver of Car 5 was released by his team, but at the same time the team’s other ] car was also being released. This caused Car 5 to move towards the fast lane when Car 44 was passing and Car 44 had to take avoiding action to avoid an incident,” said the stewards regarding the Aston Martin incident.

As for Alpine, it added: “The Stewards heard from the team representative and reviewed video evidence. Several cars were released into the pit lane at the same time. The team member of Car 31 who was responsible for releasing Car 31 stepped back into the pit lane, close to the fast lane into the path of Car 5. While the Stewards accept that members of other teams also stepped this far into the pit lane, they did not obstruct another car and were not in a particularly dangerous situation. In the case of Car 31 the Stewards determined that this was an “unsafe act”.”

#F1 #ItalianGP
*No further action against Mazepin for impeding.
*Bottas to start the race (not sprint) from the back.
*Aston Martin fined 5000 euro for an unsafe release.
*Alpine fined 5000 euro for unsafe manner of operating in pitlane by a teammember.#MsportXtra pic.twitter.com/JKc9REa5mR