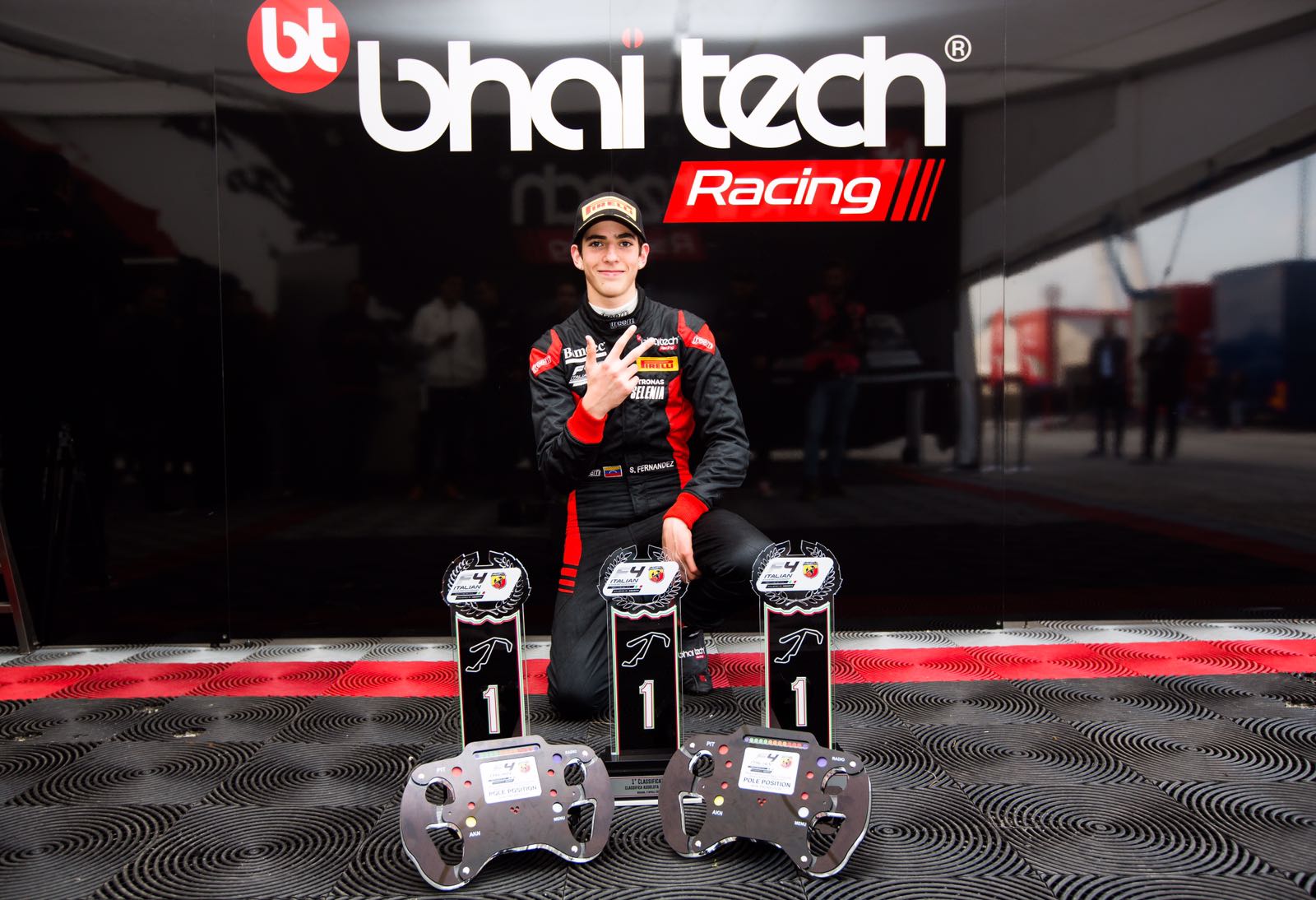 We had the pleasure to talk with Sebastian Fernandez a young promise in motorsports who is currently racing in the F4 Italian Championship under his Venezuelan flag.

Ana Maria: Which is your career until you get to the Italian F4 category?

Sebastian: I have started as the majority of the driver’s in karting. My first year was in Venezuela. After that I went to the US and spent a whole year racing in the Florida Winter Tour, probably the best karting championship at the moment, where I was finally the runner-up.

The following year I started to race in Italy with WSK for the Mini and Junior categories. There I had the chance to participate in some European Championships finishing 5th. in the Junior Championship.

I jumped to F4 in 2016 racing for the first season. I finished 12 in the overall Championship and within my first year I got two ‘Pole Positions” and my first win.

This is the second year in a row and would be the last one in F4. We have made great results with two ‘Pole Positions’ and three victories within the three races in which we participated. At the moment we are leading the Championship and looking forward to finish like that.

Ana Maria: This weekend will be the next round of Italian F4 at Adria, what would you expect, tell me your ambitions. Are you going for the triple-victory?

Sebastian: Obviously, we always try to appoint for that (The Victory) I would like to win all three races but first we have to focus on get the ‘Pole’ or start within the first three to five. Then try to finish also within the top five to keep scoring since the Championship have just started. The ideal is to remain as a leader. Our aspiration is to win but finishing on the top 5 would be a good result for the Championship standings.

Ana Maria: What do you feel that excellent weekend at Misano where you started the season getting a triple-victory?

Sebastian: It was a very special weekend for me. It has being probably the best weekend since I have started in racing on single sitters. I’m really happy because two ‘Pole Positions’ and three wins are not easy and is something that not a lot can accomplish. It is something that gives me a lot of satisfaction.

Ana Maria: Although is too early to know and still missing too much time, do you have an idea of what would be your next step and next category in 2018?

Sebastian: For the next year we are not sure yet, the FIA F3 is one of the best’s categories but also the GP3 would be a good one since there are more drivers winning there. The F3 came down a bit. Coming from F4 to GP3 is a great step better than jumping from F4 to FIA F3. There are also much experimented and older drivers than me over 20 years old. We are not clear yet but definitely would be either FIA F3 or GP3.

Ana Maria: Do you follow any particular category of motorsports?

Sebastian: I use to follow Formula One. NASCAR Series a little, Indy Car sometimes especially the Indy 500,  I can’t wait to see Fernando Alonso who is my favorite driver. I use to follow also GP3 y F2.

Ana Maria: Since you have mentioned Fernando Alonso as your favorite driver, what do you expect from him on Indy500?

Sebastian: He is a very experienced driver so we expect a good result from him, anyway he is the Rookie now and he has never drive before here in an Indy car and an oval so it’ll be difficult. There are also a lot of good drivers there with a lot of experience so it should be a nice race.

Ana Maria: The F4 US the races are in circuits combined, have you ever try in ovals??

Sebastian: No, this is something that you never see in Europe. It happens only in Indy, NASCAR. I really like Indy Car because they combine urban and street circuits and ovals. People use to see easy to drive in ovals and it is not, specially the speed, a small mistake can cost a lot.

Ana Maria: To finish the interview, let me ask you what do you think about the new F1?

Sebastian: This year’s cars are more demanding, there are more G forces involved since they increased speed at every turn. There is also more grip so that means more demanding drive and probably in the future when I get older would be much more. I’m preparing and getting ready for the future.

Ana Maria: Thank you so much Sebastian for the interview and good luck in Adria this weekend.

Sebastian:  To all the fans that will be paying attention to my race, thank you very much for your support and look forward to get the victory.