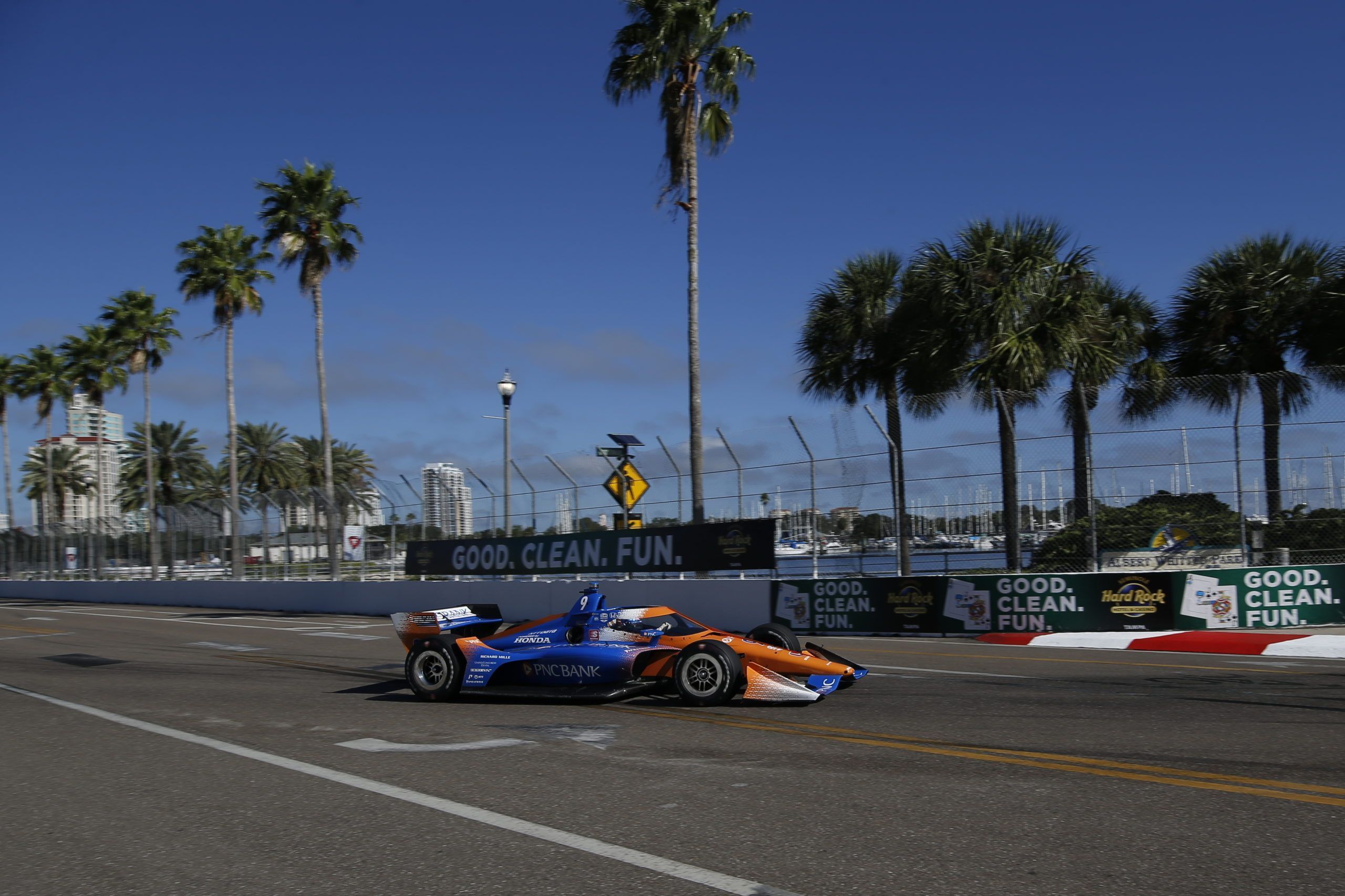 Team Penske’s Josef Newgarden won the IndyCar Firestone GP at St. Petersburg, but in the end CGR’s Scott Dixon came out atop the championship standings.

Marking the beginning of the end for a delightfully unique 2020 IndyCar campaign, the green flag flew to a field of 24, led by Team Penske’s Will Power. The Australian held his lead into turn one at the circuit originally intended to host this season’s first round, and retained his position for the duration of the first lap.

After an uneventful start, all eyes set on those engaged in the championship fight: CGR’s Scott Dixon and Team Penske’s Josef Newgarden. The latter was on the offensive from the get-go, making an effort – albeit a failed one – to pass AJ Foyt Racing’s Sebastien Bourdais on the narrow streets of St. Petersburg. Newgarden would attempt a move on the Frenchman once more a few laps later, but he would fail once again, and consequently come under pressure from those behind him.

Before that, however, a mistake from Power saw him lose the lead to second-place starter Alexander Rossi of Andretti, the Australian also dropping behind Rossi’s teammates James Hinchcliffe, and Colton Herta, as he described a downshift issue that cost him time.

It was post this that some runners, on an alternative strategy to the rest of the field, pitted in an effort to escape the traffic, doing so long before the projected pit stop window. Among those adopting this strategy were Team Penske’s debutant Scott McLaughlin, and Bourdais, as well as the high-starting ECR driver of Rinus Veekay.

It wouldn’t be long before the leading Andretti cars encountered the aforementioned off-strategy cars to lap them, but despite the traffic cluttering the street circuit, the running order near the front remained unchanged. After this, lap 30 marked the beginning of the forecasted pit window, which saw all of the leaders pit with little change to the running order.

Some seven laps later, Power incurred race-ending suspension damage after hitting the barriers lining the track, his stricken Dallara IndyCar bringing out the full-course yellow flag, albeit it was only one corner before DCR’s Santino Ferrucci hit the barriers and his IndyCar became stranded in its own right and brought out the full course yellow once more.

Immediately after the green flag flew once more, so too did the yellow after McLaughlin and Veekay crashed into each other in turn one, the former having spun after closing on on Andretti’s Marco Andretti and tapping his rear. After pitting, Veekay continued on, while McLaughlin was unable to further his participation.

This restart was far more tranquil than those preceding it, seeing the field neatly navigate the challenging circuit without incidence. However, a few laps later, the running order in the top three finally saw a change, after Herta went off of the circuit, rejoining shortly thereafter, Newgarden took third, before the Penske driver dove for the pits.

The other leaders followed suit, with yet more change in the running order at the front after Herta, utilizing an overcut strategy, repassed Newgarden and Hinchcliffe. After this, Rossi spun after getting on the marbles, and hit the barrier to end his race. The American’s incident brought out the caution yet again, setting up a 28-lap shootout to end the race.

The restart action began with immediate effect, as Hinchcliffe challenged Herta for the lead. Later in the lap, Andretti found himself in the barriers after contact with RLLR’s Takuma Sato, and later yet, Hinchcliffe – of the same team – mysteriously spun, crashing into a competitor as he attempted to re-enter the race.

The aforementioned incidents resulted in a further caution, and on this restart, Newgarden overtook two cars in turn one to take the lead. Concurrently, Arrow McLaren SP’s Oliver Askew hit the tyre barrier to end his race after contact with Sato. It was a gutting way to end his final race with the team, as he is dropped after 2020.

Nonetheless, this was an incident that initiated another caution, and as if the unusual could not become any more prevalent in the race, the safety car itself, which had led so many laps, ran out of fuel, leaving Newgarden to keep the pack in line.

When he was indicated to, Newgarden set off once again, this time in the lead of the race. However, a resurgent Patricio O’Ward of Arrow McLaren SP, who had overtaken both Herta and Dixon into turn one, soon challenged the American driver, and continued his pursuit in the subsequent laps.

O’Ward failed in his efforts, and ultimately Newgarden led the Mexican home to win the race. However, Dixon finishing third place was enough to secure him a sixth world championship, as he continues to rewrite the history books.

In fourth was Bourdais, with Andretti’s Ryan Hunter-reay coming fifth.In sixth was Penske’s Simon Pagenaud, who led CGR’s Marcus Ericsson across the line some ten seconds off of Newgarden. Eighth was occupied by AJ Foyt’s Charlie Kimball, who finished narrowly ahead of RLLR’s Graham Rahal in ninth.

Troublemaker Sato, who was involved in many of the incidents that defined the race, came 10th, while Herta’s fall from grace, after he led Newgarden previously, saw him come 11th. Carlin’s Max Chilton managed 12th, meanwhile DCR’s Alex Palou secured 13th, having been forced to pit late in the race in an abandonment of an attempt to do one less pit stop. Hinchcliffe came 14th, ahead of Veekay in 15th.