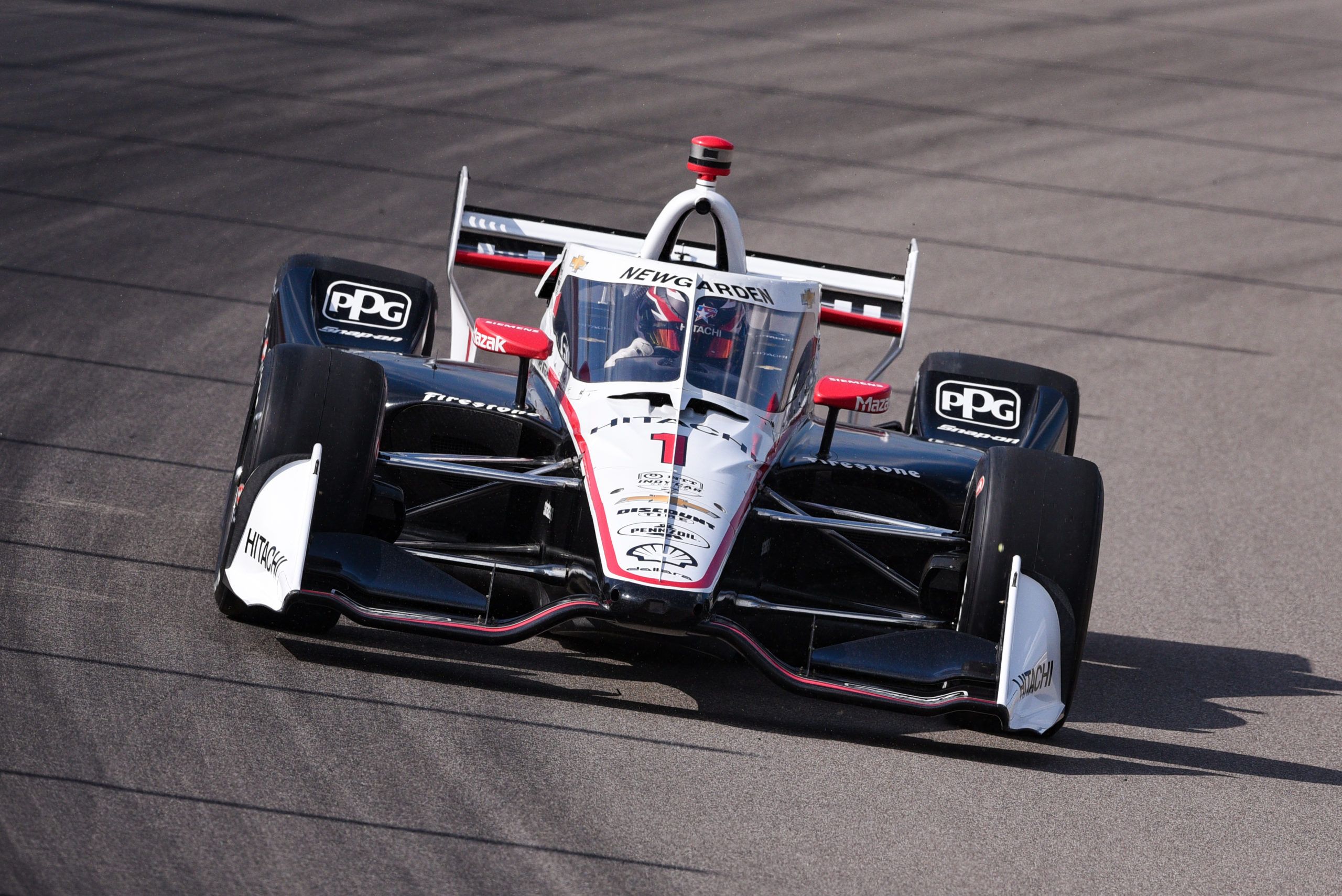 Reminiscent of the race preceding it, the second IndyCar race at Gateway was yet another to have a delayed waving of the green flag, this time because of foreign fluids on the track – the result of a leaking service vehicle.

When the green flag finally was flown, however – after three laps of yellow flag running for purposes of safety – all attention was on polesitter Takuma Sato, driving his RLLR Dallara-Honda IndyCar, who started alongside Newgarden. The Japanese driver led into the first turn, and remained in the lead for the early stages of the race, as lively racing ensued behind.

Sato quickly produced a large gap, which was just as quickly diminished upon his catching of ECR’s Ed Carpenter. The American driver and IndyCar team owner, fighting to stay on the lead lap, held up the 43-year-old, forcing him back into the clutches of Newgarden, and his Penske teammate Power, who overtook Newgarden for second as he set off to pursue Sato.

The first of the pit stops began roughly 40 laps in, with the likes of ECR’s Rinus Veekay and Andretti’s Ryan Hunter-reay peeling off for the pits, along with Arrow McLaren SP’s Patricio O’Ward. The leaders of the race stayed out for a few more laps, save for Josef Newgarden, who also stopped for fresh tyres and fuel, and came out behind one of the earlier hitters, Veekay – a major beneficiary of the undercut strategy.

Upon Sato pitting, he, too, lost positions – notably to O’Ward, who had stolen the lead of Saturday’s race from Power in similar fashion, and now sat in the front ahead of the aforementioned Australian, who had also gained overtaken Sato, as had five other cars.

Many laps of largely uneventful green flag running followed, and just shy of lap 100, O’Ward dove for the pits one lap prior to Power’s stopping, which saw the Australian IndyCar ace come out in front after he posted a particularly fast in-lap.

Sato once again remained out for longer than his adversaries, but his attempts at an overcut ultimately failed, as did those of Andretti’s Herta, whose attempts on the lead of Power did not go to plan, though he did re-enter the race in fifth, having overtaken Sato in the process.

Yet more laps of quieter running ensued, and book-ending this period was another round of pit stops, under which O’Ward and Newgarden, who pitted simultaneously, had a dramatic battle on the pit exit. It was one that saw Newgarden overtake the Mexican in what would prove to be the fight for the lead, as a sloppy pit stop for Power dropped him out of contention.

The Australian ended up P3, ahead of Herta, who had come out in front of Veekay in his own right, and later survived a dramatic slide through turns three and four, after some minor contact with the Dutchman whom he had previously passed destabilized his IndyCar. His slide was compounded by the oil-drying compound, initially laid down to minimize the effects of the aforementioned fluid on the track.

The field bunched up dramatically as Newgarden caught lapped traffic, and in the tight pack, Sato hit the wall, bringing out the yellow, under which the race finished. O’Ward came second from Power, as Veekay came fourth, and CGR’s Scott Dixon improved from his starting spot of sixth to secure fifth.

Sixth place went to Herta, just as seventh did to CGR’s Rosenqvist, and eighth, to Carlin’s Conor Daly. Despite crashing, the damage on Sato’s car was minimal enough to see him finish, his ninth place being secured by the yellow flag.

In tenth was Santino Ferrucci of DCR, who finished ahead of Hunter-reay of Andretti, and Palou (12th). MSR’s Jack Harvey occupied 13th, as he beat out Rossi, also of Andretti Autosport. Rossi’s teammate Marco Andretti finished 15th.