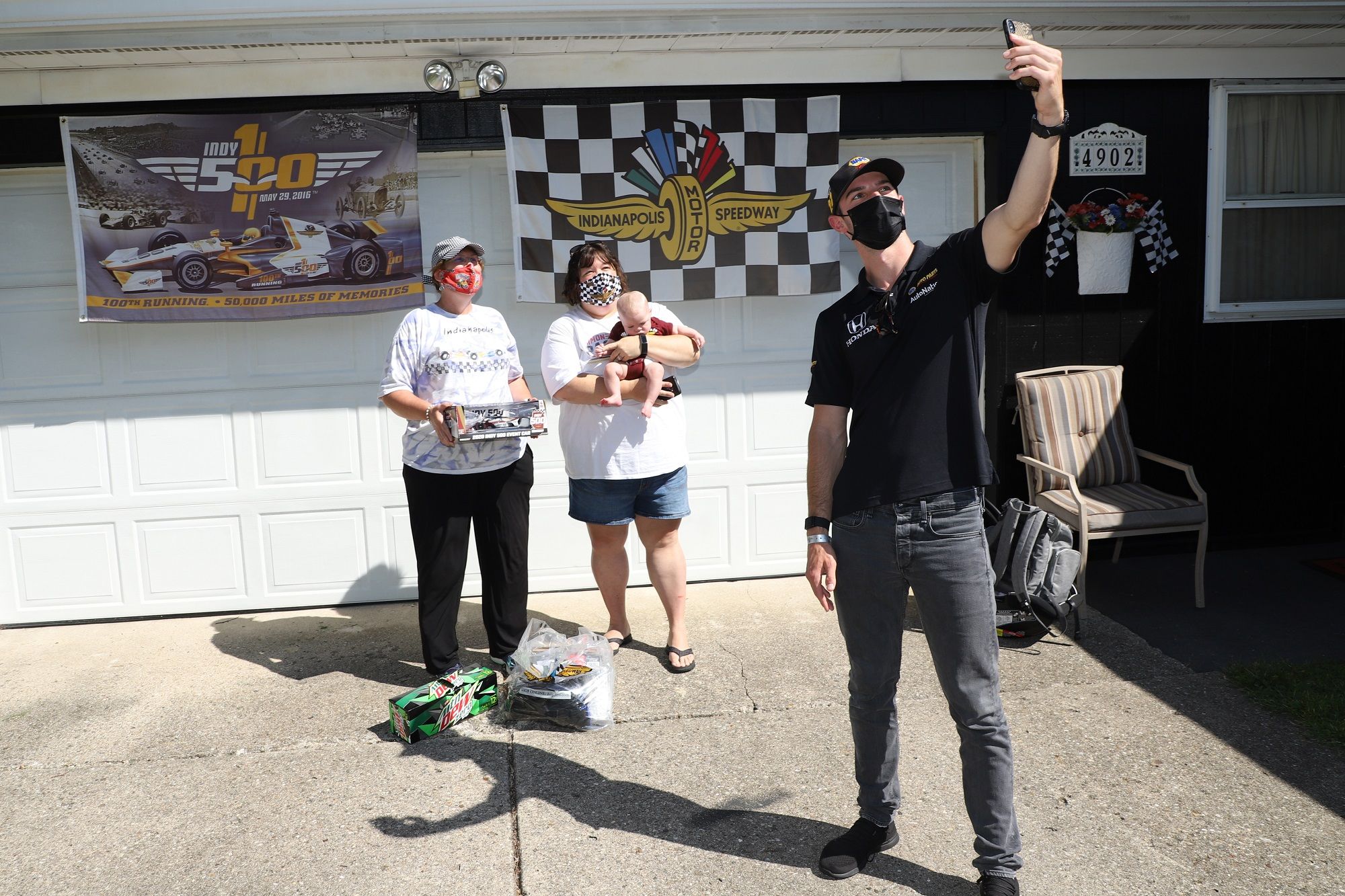 Speedway, Indiana saw an Indy500 motorcade with IndyCar drivers descend on the town as Marco Andretti declares he is ‘ready for war’, and Fernando Alonso banks on his race pace.

At the 2020 Indy500, Honda’s advantage was clear in qualifying trim: they were borderline-untouchable. However, when the boost levels drop, and the wings grow ever more acute in angle, the playing field is leveled, and Chevrolet – who power big-hitters starting nearer the back – draw roughly even with regards to performance.

As such, many of the higher-starting Honda-powered players will be looking in their rear view mirrors throughout the IndyCar race, aware of the ever-present threat posed by Chevrolet’s cars. One of these drivers will undoubtedly be Andretti’s Andretti, who lines up in first position for the 104th runnning of the Indy500.

The American made clear when talking to FormulaRapida.net that he expects to be challenged by many drivers, no matter the engine manufacturer with which they are affiliated. “This is the IndyCar series, and I think every driver, every team, is strong on their day. I think everybody is going to be strong, and I’m prepared for everyone to be strong – not just Honda.

“[Chevy cars] are definitely stronger in race trim, so I’m not expecting this to be a joyride on Sunday. I’m ready for war, and that’s what it could be, so I’m just ready to fight in tough scenarios and I think with the talent from the drivers and the teams, we have these cars so wrung out, almost so equal if you look at how close everything is. It’s going to be tough,” said Andretti, who will also – like many spectating the race – be keeping an eye on Alonso of Arrow McLaren SP.

Alonso, the pilot of a Chevrolet-powered entry, lines up low-down on the grid in 26th, but is in good company. The Spaniard may carve through the field with his fellow Chevrolet drivers in a bid to get to the front and challenge the Andretti cars, including Marco himself.

Certainly, Alonso’s race pace fives him enough confidence that he can achieve the lofty goals he set for himself when he arrived at IMS over a week ago. “I think we are OK on race pace,” he said, eyeing to complete the Triple Crown before F1 return. “Since the first Sunday, after the Fast Nine, we’ve come in the top ten, top fifteen.

“We just lacked a little bit of performance on Fast Friday and Qualifying day. We’d love to be starting a little bit more forward on the grid, but this doesn’t change our targets, or our goals for the race despite the [lower] position,” said Alonso, whose further Carb Day running affirmed that he was in contention for a good result, if not the win he set out for.

Ahead of the Indy500 race, though – set to be commence on Sunday at 2:30 ET – drivers descended on Speedway, Indiana with a traditional parade, this time one that took place outside the IMS facility for the countless thousands of fans that cannot enter the premises because of COVID-19 fears.

All 33 drivers of the Indy500 field also went to the homes of long-time ticket holders for the race to celebrate their devotion. Countless drivers and teams took to social media to share their heart-felt interactions, as well as footage of the impromptu motorcade, in which drivers were passengers in the standard-issue Chevrolet Camaros.

The surprise of a lifetime for long-time #Indy500 ticketholders in the town of Speedway, IN. #INDYCAR // @IMS pic.twitter.com/aUhDDwSZdY

When the #INDY500 fans you’re surprising ask you to drive the @teamchevy Camaro right up in the front yard, you definitely do it. @MaxChilton giving the fans what they want this afternoon! So much fun visiting this crew this afternoon who will miss their first 500 in 55 years! pic.twitter.com/cz98WNIiAm

Such an incredible scene Speedway, Indiana. We miss you out at the track. Can’t wait for next year #Indy500 pic.twitter.com/6nBtv4zAvt

When @MarioAndretti and @MarcoAndretti show up at your front door:

So much love for the #Indy500 in the wonderful little Town of Speedway. pic.twitter.com/PkWPrOTkhH

33 @IndyCar drivers dispersed across the city this morning to surprise some of the best fans in the world. ⬇️ This was awesome. #indy500 #august23 @IMS @FollowAndretti pic.twitter.com/G6JG0FmbT6

Tomorrow will not be the same w/o our fans, so today we surprised ticket holders in Speedway w/ a bag full of #Indy500 goodies. I know it doesn’t fill the void of being in the stands & watching it live, but know we will come back strong in 2021 with a packed house! #ThankYouFans pic.twitter.com/Arhxrdwsxe

Great to see some of the fans today! They’re such a big part of the Indy 500 and are missed by everyone at the track. See you @IMS next year! pic.twitter.com/IJ6jce91ka

We miss all you fans at the @IMS this year!!! This was really cool today driving through speedway on our way to an event, thank you for the support! #ME8 #INDY500 #INDYCAR pic.twitter.com/KktwfEPvuG

Thank you to the best fans in the world!#Indy500 | #INDYCAR pic.twitter.com/eO6Q2Dg9O8

We took the 33 @TeamChevy Camaro pace cars out to Speedway for a quick parade. Great turn out!

Then it was off to visit some long time @IMS fans and drop of a couple race day care packages!#INDYCAR // #Indy500 pic.twitter.com/KX7TAFpLeB

Some Speedway residents also tweeted about the whole ordeal, as did certain IndyCar media members. “Didn’t even know this was happening until we showed up and saw a crowd, What a cool way to start the day!”, wrote one popular IndyCar social media personality, Kyle Cuthbertson, in a tweet about the Indy500 weekend surprise.

Here’s what Zach Veach said ahead of the Indy500