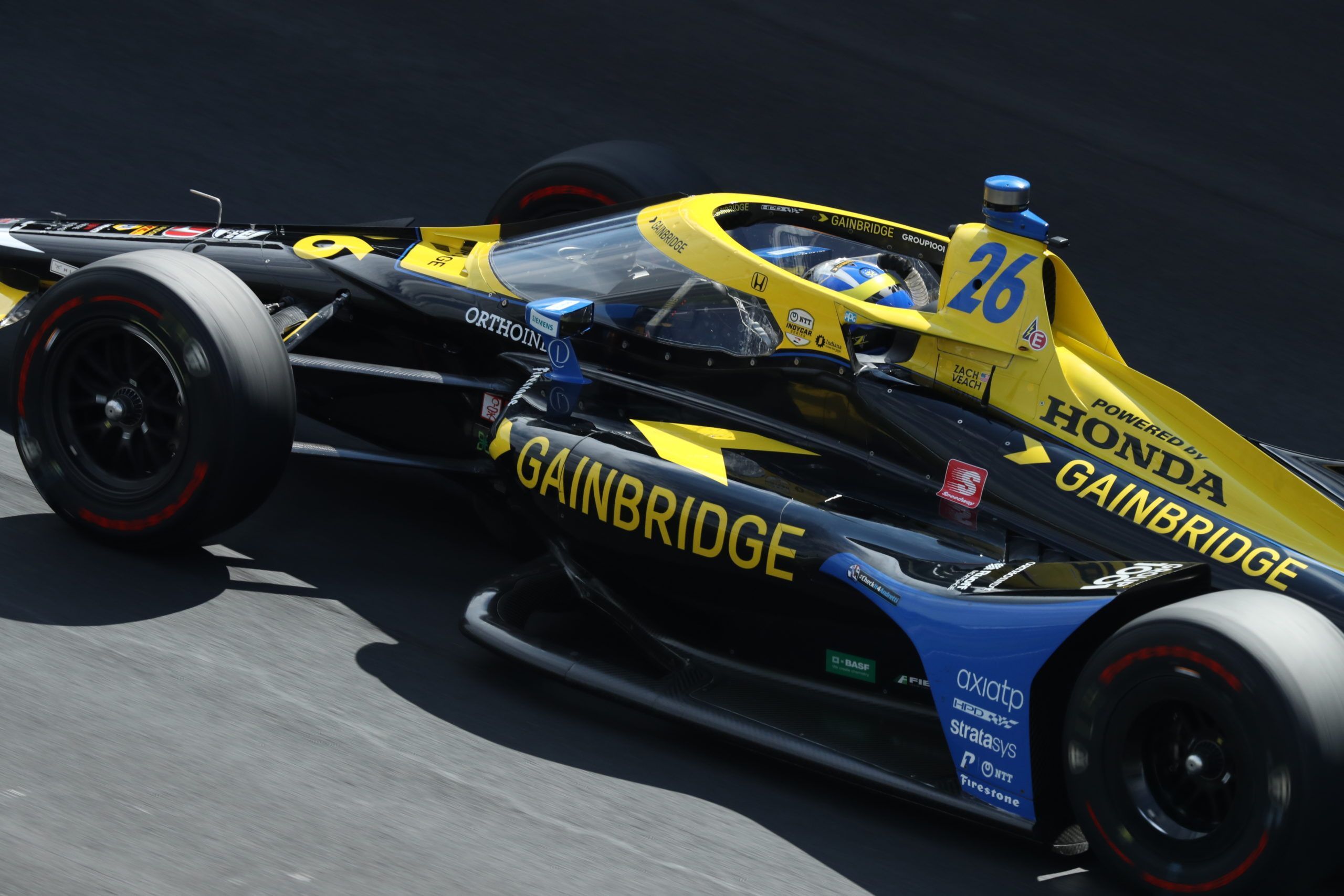 Andretti driver Zach Veach, starting 17th, isn’t concerned by popular statements that overtaking will be more difficult than in Indy500 ‘s prior.

Throughout the condensed proceedings for the 2020 Indy500 – the actual race for which is to be run on Sunday – there has been discussion about the difficulty of overtaking with the aeroscreen, which has vastly changed the aerodynamic profile of the modern day IndyCar.

Many IndyCar drivers are of the belief that the turbulence caused by the safety apparatus will make passing opportunities a rarity for the upcoming race, and this has been a point argued by Indy500 veterans such as RLLR driver Takuma Sato, and even relative newcomers, like Arrow McLaren SP driver Fernando Alonso.

Andretti’s Veach, however, doesn’t have an assessment to this effect. Rather, the 25-year-old American boasted that his car is perhaps the best he’s ever had the pleasure of driving with regards to running competitively in traffic, the conditions under which many have complained of their respective cars misbehaving.

Veach also pointed out that the expression of concern over the ease – or lack thereof – of overtaking is standard procedure among drivers for every Indy500, even though such concerns rarely legitimately materialize in the race itself.

Veach lines up 17th for Sunday’s Indy500 (the lowest-down of the Andretti cars), and he explained that a problem in qualifying led directly to this poor result, which he will have to fight his way back from over the 200 laps of IndyCar’s crown jewel event.

He’ll be hoping his suspicions about the legitimacy of these worries are justified so that he can efficiently carve his way through the field. “This is the most excited I’ve ever been for an Indy 500,” started Veach. “For whatever reason, the car we had on Sunday was the best car I’ve ever had in traffic in my life, especially in IndyCar. I think we’ve found something that’s really solid. Unfortunately, we’re starting 17th.

“We had an issue [in qualifying] that hurt straight-line speeds, which we were lucky to [identify] Sunday afternoon and get that fixed, but that definitely hampered us. We know what the car is capable of looking at our teammates, so I’m really excited to start working our way forward [in the race].”

“If there’s one thing I’ve noticed in the past few years, it’s that every one of us says that we can’t pass, until the race. And then, magically, we can all pass,” Veach joked when pressed by FormulaRapida.net, who were represented at the IndyCar media day.

“We always talk about how hard it is to get in traffic, and then it always seems to take care of itself in the race for some reason. Talking to some of the guys, the aeroscreen has made the cars a little bit better around this place [in traffic or otherwise].

“Having the weight more forward, it gives the car hints of more understeer, which just seems to calm it down a bit more,” said Veach, who even stated that the aeroscreen aids stability, which is a key factor in one’s ability to follow another car closely.

“So, from my point of view it’s balanced the car a little better in the superspeedway trim, and with the front-wing configurations we got from last year’s Indy 500, we’re using that this year, and I think we’ve all found a pretty good place. Is it going to be a race like 2014? I don’t think so, but in it’s own way I think it’s going to be very exciting.”

Contesting his fourth Indy500, Veach didn’t go so far as to say the draft is emboldened – something he says is a credit to the aeroscreen’s design. “I wouldn’t particularly say that the draft is any bigger, because the aeroscreen cuts such a big hole in the air that the air comes back down off the back of the car. Unfortunately, it’s not going to punch a hole in the air and make passing any easier for us, but I guess that’s a credit to the people designing it.”