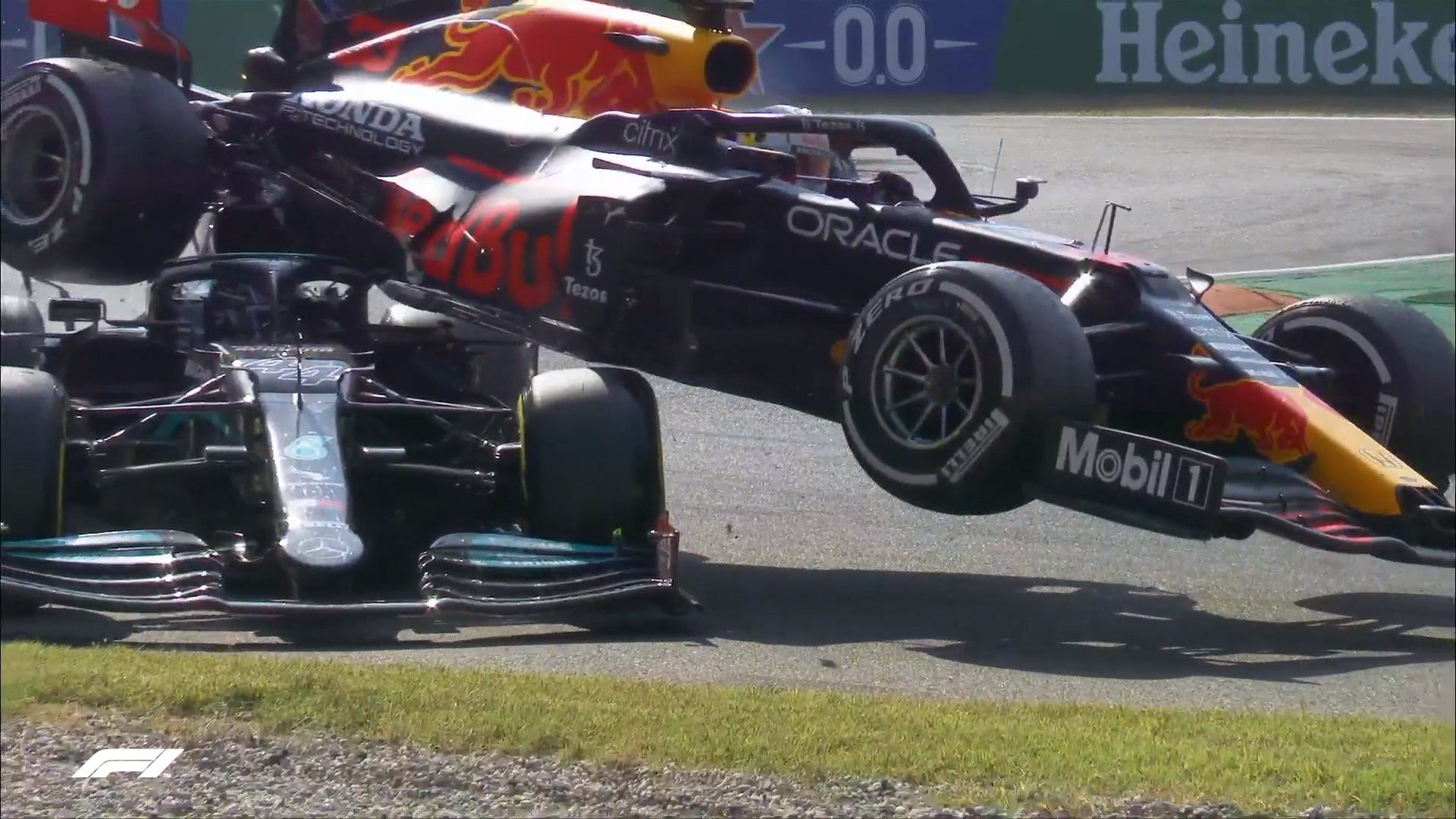 Lewis Hamilton/Toto Wolff and Max Verstappen/Christian Horner had their views on the F1 Italian GP incident which ended their races.

After the coming together at Silverstone, it was another addition to a Hamilton and Verstappen moment. It was not just one, but twice in the same grand prix at Monza. It started on Lap 1 of F1 Italian GP, when the two were side-by-side at Turn 4.

The usual corner to see some contact and it so happened that Hamilton had to take the off-track moment, which cost him a place to Lando Norris. There was no investigation necessary for that, but it was a different ballgame for the Turn 1 incident.

After a disaster stop for Verstappen where he not only lost to Hamilton, but also Norris, a slow stop for the Mercedes F1 driver brought them together once again on track. He was leaving the pits, as the Red Bull driver came side-by-side with him into Turn 1.

Verstappen tried the move on the outside and his rear-right tagged with the front-left of Hamilton, which was enough to send them both into the gravel. The horror was the Dutchman’s rear tyre rubbing the head of the Brit, who was saved by the Halo.

At first it didn’t look that bad, but the close-up and slow-up showed the worse part of the incident. Hamilton tried to reverse but he was stuck, as Verstappen jumped out, saw him, and walked towards the pitlane. It took Hamilton some time, before he could get out.

Most reckoned it to be a racing incident, with either blaming each other, but the stewards handed Verstappen a three-place grid drop for Russian GP, noting that he was ‘predominant’ driver to be blamed, which means more than Hamilton at least.

While this time, both Verstappen and Red Bull took it to the chin, Hamilton and Mercedes suggested that it was time that the Dutchman had a penalty for his moves. While explaining their sides, the Brit added on his surprise of the Dutchman walking away.

Hamilton: “A little bit stiff a little bit sore on my neck to be honest because it landed on my head but I’ll be okay. It’s feeling like it’s getting a little bit worse as the adrenaline rush wears off but I’ll work with Angela to fix it. Honestly, I feel very fortunate. Thank God for the halo that ultimately I think saved me, that saved my neck. I don’t think I’ve ever been hit on the head by a car before. My head really is quite far forward.

“I’ve been racing a long, long time, I’m so so grateful that I’m still here. Feel incredibly blessed, like somebody was watching over me. His rear wheel landed on my head. I think the rear wheel landed on the halo and I think the inside of the most cambered part of the tyre landed on my head. I think Angela is going to be travelling with me these next days but I think I probably will need to see a specialist just to make sure I’m good for the next race. It’s getting tighter and tighter but as I said, I’ll live.”

Hamilton: “Just from what I remember I mean, I was racing as hard as I could and I finally got past Lando. I was in the lead or time-wise they told me I was in the lead, so they pitted me. The pitstop was obviously slow and I lost a couple of seconds and I think a second and a bit whatever it is. I came out and I saw that Daniel came past and Max was coming. I made sure I left a car’s width on the outside for him, I went into Turn 1 and I was ahead and I was ahead going into Turn 2 and then all of a sudden he was on top of me so.

Verstappen walked by, him trying reverse –

Hamilton: “I definitely didn’t think Max would lose control over the kerb and run into me. Looking back at the footage, it obviously happened very quick. Being in the car, all I could think of was getting going and how many positions I was losing. I’m still just in race mode, so it’s just like: how can I get going again? I’m sitting there in a little bit of pain, but just like: come on let’s go. But unfortunately the car wouldn’t move.

“I did see Max get out and just walk by. I found that a little bit surprising, because ultimately I think when we go out, and when we do have incidents, the first thing we want is make sure if the guy that we crashed into or we collided with is okay. But the good thing is I was able to get out. It was a long walk back, but we live to fight another day.”

Take on the clash –

Verstappen: “Of course, we realised that it was going to be close into Turn 1, so he cut across already after the white line and I had to go onto the green part to not touch. And when I went the outside and of course you realise I was going for it. So, he just kept on squeezing me and I just wanted to work with him because I wanted to race people because then people automatically start talking about Silverstone, but these things happen.

“Of course it was not nice at the time but I think we’re all professional enough to just get on with it and keep on racing each other. I didn’t expect him to just keep on squeezing because he didn’t even need to but even if he would have left me just the car width we would have raced out of Turn 2 anyway and I think he would have probably still been in front but then he just kept on pushing me wider and wider and at one point there was no way to go like he just pushed me onto the sausage kerb and that’s why at the end of the day we touched because of the rear tyre then you know bumped up to his tyre.”

Turn 4 incident with Turn 1 of Imola, other past issues –

Verstappen: “I don’t think you can judge them exactly the same because he just kept on squeezing and squeezing while I was really a lot alongside him and you need two people to work together to make the corner and we were fighting for position and yeah unfortunately we touched, so if one guy is not willing to work then yeah what can you do it’s not gonna happen.”

Talk with him, did not see what happened post-incident –

Verstappen: “I mean of course it’s very unfortunate what happened. I think nobody likes to see that, but again I think we are professional enough to step over it and just keep on going. But yeah like I said it’s just very unfortunate. As for the post-incident, Lewis was fine, he was still trying to reverse when I was already out of the car. When you are not fine, you are not doing that.”

On the team bosses side, both Wolff and Horner termed it unfortunate, naturally, but this time the former did put it more on Verstappen pocket than Hamilton, while the latter was more balanced on putting it on the racing incident side.

Wolff: “It doesn’t look like alongside no? And then you go over the sausage kerb in the middle. But if you compare it to what Lewis said to Turn 4 in Lap 1, there was no space left, he was pushed off the track actually. I think when you look at Turn 4, he backed out and that was quite a thing because probably you know that he’s staying ahead of you and then the incident when they actually crashed it was clear for Max in there that it would end up in a crash.

“I think if we don’t manage that in the right way and I am sure the stewards will look at it in the right way, this is going to continue. We had a high speed crash in Silverstone. We had one car ending on top of the other one on Lewis’ head here so how far can we go. Maybe next time we have a high speed crash and land on each other. And in Monza, halo definitely saved Lewis’s life. It would have been a horrible accident, that I don’t even want to think about, if we wouldn’t have had the halo.”

Horner: “First of all, we shouldn’t have been in that position because we had a poor pitstop. We had a what looks like a human error. Unfortunately, I think it was on the front right that we had the issue and the wheel was done up and ready to go and unfortunately the car wasn’t released. But Max had the momentum, he had enough space around the outside, I think Lewis gave him enough through the run in Turn 1 and our opinion would be that Lewis perhaps closed him too much so, into Turn 2 you can see, Lewis gives him enough space there, Max alongside and then obviously you know an incident.

“I think that he earned it enough to be given a bit more space to work with on the left there, so you can probably argue it from both sides. So, if you take a middle ground on it you’d say it was a racing incident, but I genuinely think that you could argue Max should’ve bailed a bit more to the left, you can argue that Lewis should’ve given him more space, so to apportion blame in favor of one side or the other I genuinely think in that incident very difficult to do. I think most important thing is that the halo has done its job because it’s an awkward accident and with him coming down effectively on top of the Mercedes, thankfully nobody was hurt.”

Here’s the moment between Lewis Hamilton and Max Verstappen: https://www.formula1.com/en/latest/video.2021-italian-grand-prix-huge-moment-as-max-verstappen-and-lewis-hamilton-collide-and-crash-out-at-monza.1710704937938019304.html