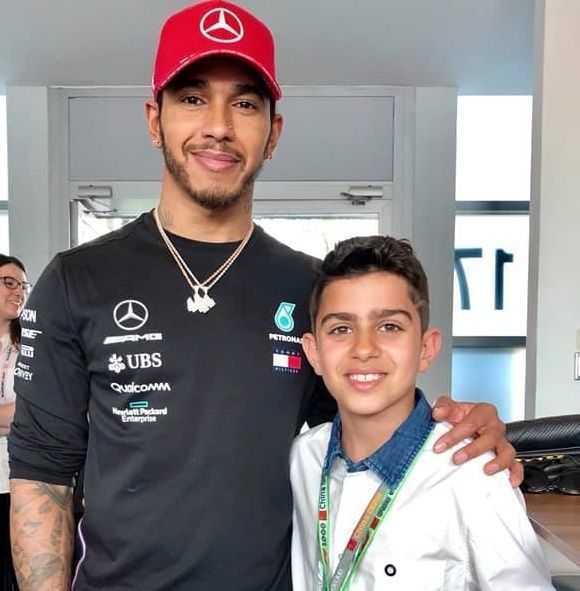 Mercedes’ Lewis Hamilton saw a bit of himself and recalled the 1996 Belgian GP weekend when he met a young kart racer during the F1 Chinese GP.

Sports is a huge unifying factor in today’s time where people from different background – whether with huge wealth or a medium one – come together and fight for a common goal, which is to win the world championship for himself and the team.

If we look at the current F1 grid, there are plenty of examples of drivers coming from a moderate family, among whom is the five-time reigning F1 champion Hamilton, who hails from Stevenage – a town in Hertfordshire in the United Kingdom.

The British racer comes from a humble background and now has become a superstar on his own right. But as it is with everyone, no one forgets the place from where he comes from as it is deeply rooted to them forever in their life and minds.

He is certainly a role model for many kids in today’s time wherein he is greeted with huge support wherever he goes. It was same during the Chinese GP but Hamilton was thrown aback with a recollection of his own memory when he met a young karter.

“This weekend I met a young boy who is karting and has won a championship, a minority, and he was 11-years-old and he really reminded me or me in 1996 when I went to my first grand prix in Spa and it was really cool to see myself within him and see the smile upon his face,” said Hamilton.

“He was in the garage during the race. It is a real privileged position to be in and it is quite surreal to have youngsters and even adults come up to you, shaking or nervous when they are around you but there’s such great energy and ultimately there’s a real strong platform to deliver key messages to a position to inspire.

“I feel very, very privileged. I try to do it in the best way I can, at the same time as living my life and making the mistakes that you do in life. You feel like you’re on cloud nine. In fact, from the moment I landed in China and got off the plane, the fans just filled me up with joy.

“When I wake up in the morning I’m groggy and I get down to the lobby and they’re outside all smiling. They’ve been there for at least an hour and they’re buzzing and when I get home tonight or back to the hotel in the evening they’re there again.

“They travel so far around the world, people save up and spend their money to go to all these different locations to support. It’s absolutely incredible and it’s very very hard to put it into words just how awesome an experience it is but also how grateful I am.”

The karter he met is UAE’s Rashid Al Dhaheri – as told to FormulaRapida.net – a WSK Super Master Series champion. He is not part of the Mercedes academy though, which named Andrea Kimi Antonelli and Alex Powell as its juniors earlier in the month.