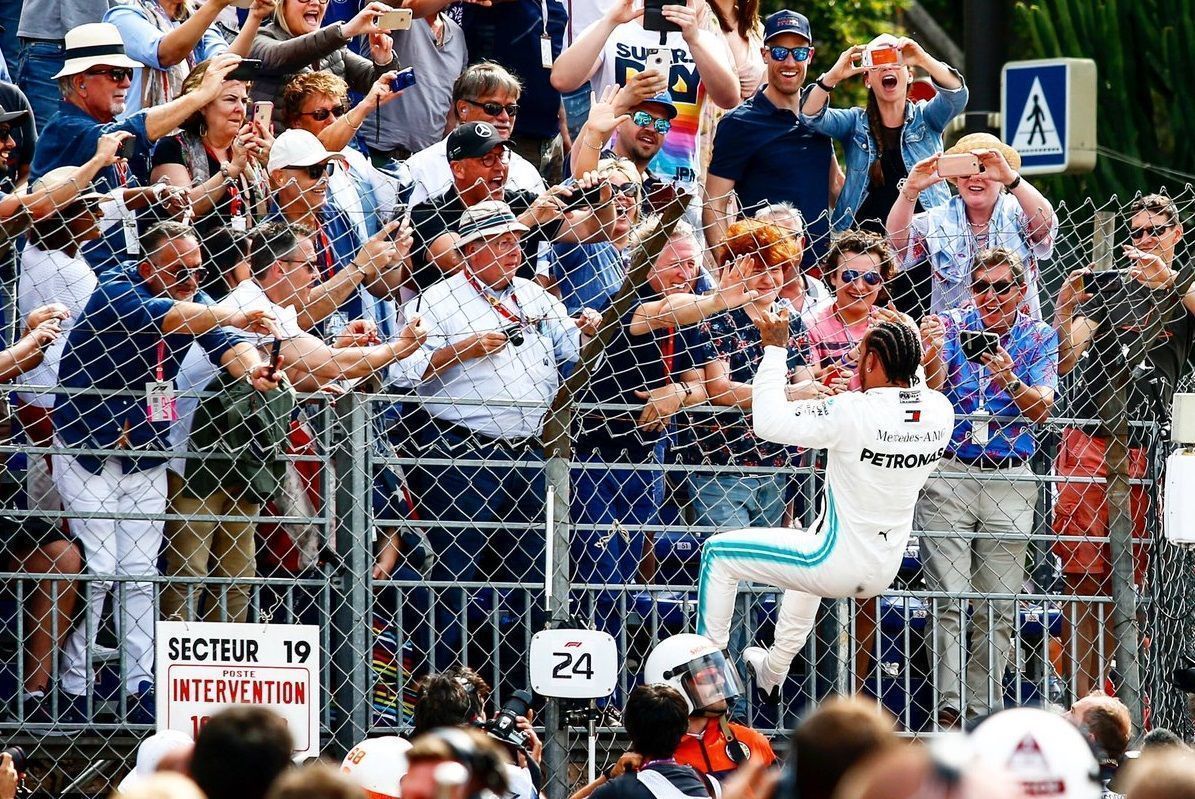 Mercedes’ Lewis Hamilton says he is trying to remember friend’s advice to enjoy and appreciate his F1 winning moments.

For the five-time F1 champion, winning has more or less become a habit and more so for Hamilton, especially since Mercedes dominance kick-started from the 2014 season in the new era of the V6 Hybrid. He has anyways won the most races since 2014 until now.

Hamilton isn’t known for an over-the-top celebrations apart from standing on top of the F1 car and then hugging the members of his team at the side. Even on the F1 podium, he hasn’t got a thing of his own like Daniel Ricciardo’s ‘shoey’.

For a personality like him, who likes to hang out with big personalities, his celebrations is certainly low-key and time and again he has admitted to having an own time in his hotel or he gets back at the gym if he is not flying out the same night.

In Monaco, Hamilton did few things extra like jumping on the fence after qualifying or running after his friends with the champagne bottle once he got his hands on it on the podium. He even jumped into the pool while on his way to the press conference.

The British noted that he is trying to follow a friend’s advice and appreciate the moments more. “There’s been a lot of races where I’ve literally just packed up, left, gone home, got home, switched the race on, watched the rerun of the race,” he said.

“I’ve tried to do that more often, so you get a better idea of what people have been seeing. A friend of mine texted me saying you don’t celebrate enough, or take enough time to appreciate these great moments, and you’re doing such a great job.

“So I’m trying to keep that in mind. It wasn’t a crazy night after Monaco [either].” Even though Hamilton has indicated of maybe racing for five more years but the winning moments could slip away anytime which makes current time all the more important.

He has a good lead now over Valtteri Bottas, who looks likely to be the only challenger for Hamilton in F1 2019, especially how things are going for Ferrari. A couple more races of no wins for the Italian manufacturer, it should be a done deal for Mercedes then.

Despite the four wins to his name, Hamilton feels his driving has been average, which is a common trend for the British racer in all his years. Hamilton usually is at his best in the mid-part or towards the end of the season but it has been a good start to 2019 still.

“I definitely feel that it’s been quite an average performance from myself, maybe above average but generally quite average for the first six races,” he said. “I feel like I’ve got the best I could get. I’ve arrived prepared – the best prepared I could be.

“But in terms of extracting the true performance from the car, I feel like I’ve struggled a little bit in these six races. I guess that’s kind of similar to other seasons but without doubt it’s going to improve as the knowledge you gain over the season race by race.

“In particular with the tyres this year, where the window is even smaller. I do anticipate things will get better as it will be for all of us. I hope, at some stage, that I’m able to crack the issues that I’ve had and get back to the form that I have within me.

“But I think going into the next race, a lot of analysis will be made and particularly towards trying to understand the tyres better and deliver better in terms of our processes and on my side, trying to work even better with my engineers to try and extract more from my car.

“That means Bono and Marcus and a lot of the engineers trying to extract more information from ERS and positioning the information in the right way so I can deliver more from this car. And also I know the guys back at the factory are working on developments.

“I think we will probably have a new engine, so the car will continue to move forwards as we will.” As Hamilton mentioned, Mercedes is expected to have a new power unit this weekend in Canada but it remains to be seen how much it helps them.