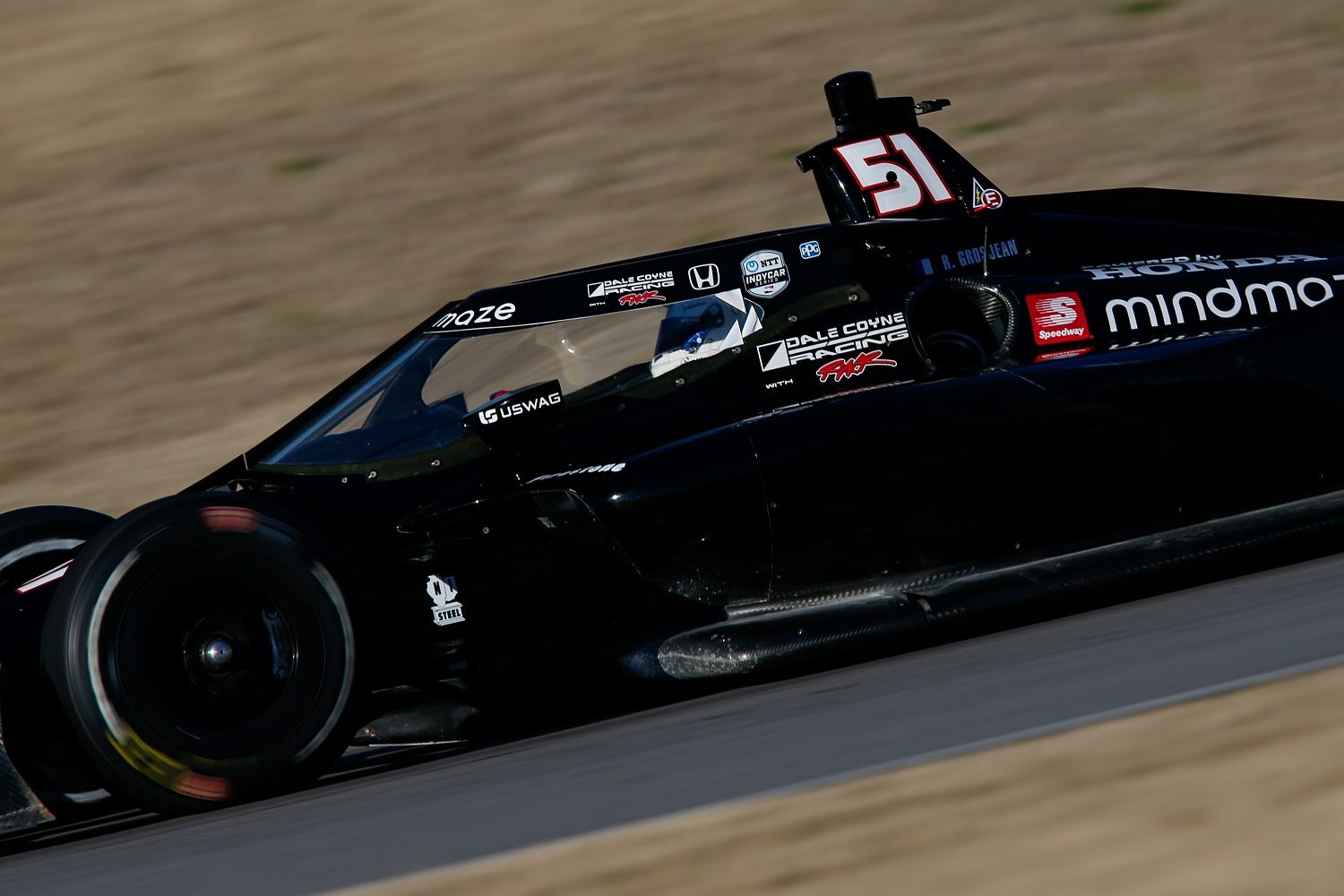 DCR’s Romain Grosjean was “pleasantly surprised” by Firestone’s IndyCar tyres, also speaking on the aeroscreen and contrasting the series with F1.

For much of his career, Grosjean has raced cars fitted with Pirelli tyres, spending eight seasons of his nine-year career with tyres from the Italian manufacturer in Formula 1. Without technology like tyre warmers or a vast array of compounds to choose from, Grosjean implies that he expected a different feeling when driving with the new rubber at his February 22 test for DCR.

The Frenchman was also impressed by the longevity of Firestone’s offering, which he says still felt good beyond 25 laps into a stint. Grosjean suggests this was not true of Pirelli’s F1 tyres, often criticized for their rapid degradation. “If I’m being honest I’ve been very pleasantly surprised with the Firestone,” Grosjean confessed. “They’ve been great.

“No tyre blanket going out of the pit, and it feels okay. It’s a bit more slippery but there is grip, and you can actually push for a few laps and they stay quite consistent. I was doing good laps after 25, 26 laps on the tires and that’s something that I couldn’t do in my previous experience.

“Generally I think I’ve been happy with them. Obviously we haven’t used the red stickers on ones, so they may degrade a bit more, but definitely the primary tires were pretty good,” Grosjean said. New rubber was among several differences he found himself adapting to when making his testing debut at Barber on Monday, another of significance being the aeroscreen.

Grosjean raced with the screen-less halo device in F1 from 2018 to 2020, attributing his survival of a fiery Bahrain GP crash last year to the titanium apparatus. The aeroscreen takes a step further in the name of cockpit protection, surrounding the driver in a shield. Like those who raced with the device in 2020, Grosjean says he hardly noticed the screen.

“Well, the aeroscreen wasn’t an issue at all and I completely forgot it was on, so that was good,” he began. If it wasn’t for the air not coming through your helmet and your visor staying clean, you wouldn’t notice. You wouldn’t know it [was there],” Grosjean insisted as his fellow competitors did previously.

The 34-year-old made note of the mechanical grip available to him in his DCR IndyCar, saying it was sufficient to allow him to experiment with new lines. “I observed that the mechanical grip of the car is pretty outstanding and therefore you can try different lines in the corner and you can actually make it smooth in the way you want it,” he said.

“Formula 1 only works as aerodynamics and the rest is just here to support the car. An IndyCar works really with the setup and the aerodynamic is much simpler and much less downforce. So high-speed corners is a bit more fruity on an IndyCar but the low-speed corners actually feel maybe better,” Grosjean added.

The DCR driver committed to learning more about the series as he works to adapt to his new car. “I need to keep adapting my driving style and understand how to go fast in an IndyCar because it’s a bit different than a Formula 1 car,” Grosjean finally said.

Here’s how Romain Grosjean fared in his first IndyCar test