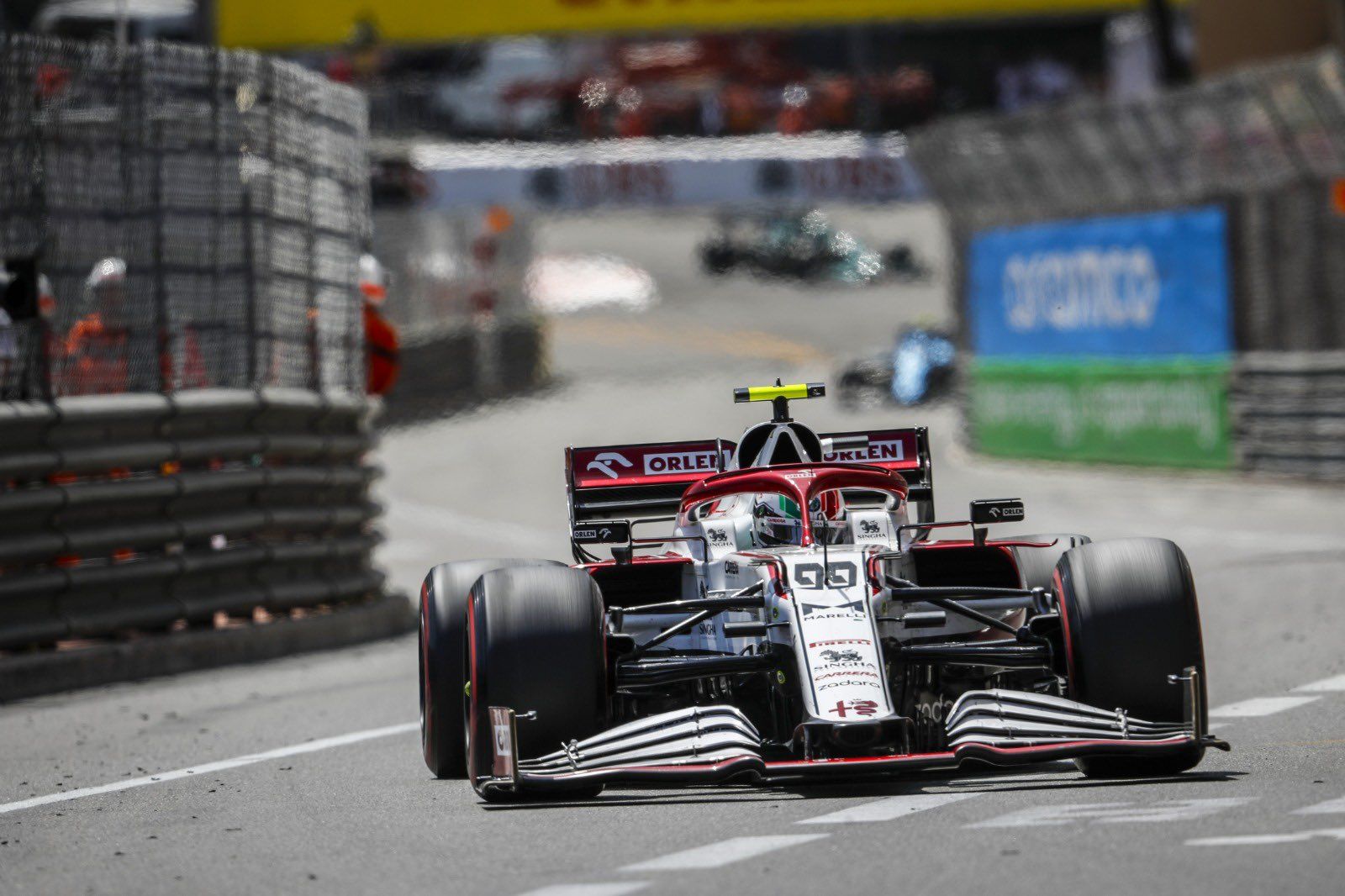 Antonio Giovinazzi reveals the trick he saw Romain Grosjean use in F1 Monaco GP to get by Esteban Ocon on Lap 1.

Giovinazzi is gaining momentum slowly in his career. After his debut in 2017 as a replacement for Pascal Werhlein, the Italian spent two seasons as test driver at Haas and Alfa Romeo, when Charles Leclerc was promoted to race seat. This is his third season as main driver, siding the 2007 F1 World Champion Kimi Raikkonen.

In 2021, so far, Giovinazzi has shown good pace, especially against teammate Raikkonen. In Monaco, he took a step up and made it into Q3, while ended the weekend with his and the team’s first point of the year – much needed in the fight to stay ahead of its rivals.

While talking on the Sky Pad on Sky Sports, Giovinazzi talked about the race start and noted his move on Ocon, which was not aired on the world feed. The Frenchman passed him at Turn 1, when the Italian was stuck behind Sergio Perez, but he fought back.

Recalling a move made by Romain Grosjean on a Toro Rosso driver, three years ago, at Turn 3-4-5 sequence, Giovinazzi went for the same on Ocon. The Frenchman gave him enough room and the Italian braked a tough later to eventually take back the place.

“It was a good start but then I got stuck behind Perez and Ocon overtook me on the inside,” started Giovinazzi. “At Turn 1, I had no space to go and I lost a position. Going on towards Turn 2 and so on, I knew from having watched a lot of onboard from few years ago and Grosjean did a great move in Turn 3, three years ago, I think it was to one of the Toro Rosso.

“So, I tried to see if Esteban braked on the inside and I was hoping he would do it, so I could use the outside line and tried to overtake from the outside. I saw the gap which was same as Grosjean, and I went for it and it was great as I braked later than him, tried to gain more speed than him into the corner and I got it.

“He gave me space because on the street track it is easy to just move little bit to the left, give you less space and you are into the wall,” summed up Giovinazzi, whose Lap 1 move went in vain after he found himself stuck behind Ocon after his stop. The Italian noted that he got stuck behind Daniel Ricciardo, which cost him time, eventually.

“When I came out of the pits, it was still Ricciardo on his first tyres, where I lost little bit of time,” said Giovinazzi. “When I saw Esteban ahead of me, it was little bit disappointing because I knew to overtake in the race, it was lot of things and it was much more difficult. I lost lot of pace there and I know I was faster than him, but then I also lost a position with Stroll.

“To be honest, with Esteban, had a issue with braking as he was really using braking all the time, but it was difficult to overtake, so had to be content with P10,” summed up Giovinazzi, after losing the chance to be eighth at one point of time.

While it was a slight disappointment for Giovinazzi, his rival Ocon – whose career is in a similar place to the Italian, driving alongside two-time F1 World Champion Fernando Alonso – saw a bright run after starting from outside the Top 10. He once again finished ahead of the Spaniard, who is struggling a bit to show his true performance levels.

“We lacked a little bit of pace, I think it was good that we got Antonio, who qualified better than us,” said Ocon. “But yeah, we touched a lot of things and learned a lot of good things this weekend. I think that’s gonna help us in the future, so we’ll keep pushing and hopefully adding more performance to the car. It was not easy.

“We were in a tricky situation. [Monaco is] probably the best place to defend, so we did well,” he added, as Ocon referenced the weekend to be “a useful one”, as he was “happy to have scored points”. This is his fourth point finish in a row and feels “confident in the car”, yet he feels that “there is still margin” to improve.

Here’s video of the moment Giovinazzi got Ocon through Stroll’s onboard – no other video of the move is available at the moment: https://www.formula1.com/en/latest/video.monaco-grand-prix-2021-first-lap-onboards.1700650458612082447.html

The story was co-written by Lorenzo Liegi

[Note: We tried to look for a video of the move made by Romain Grosjean, but there is none available of the same]