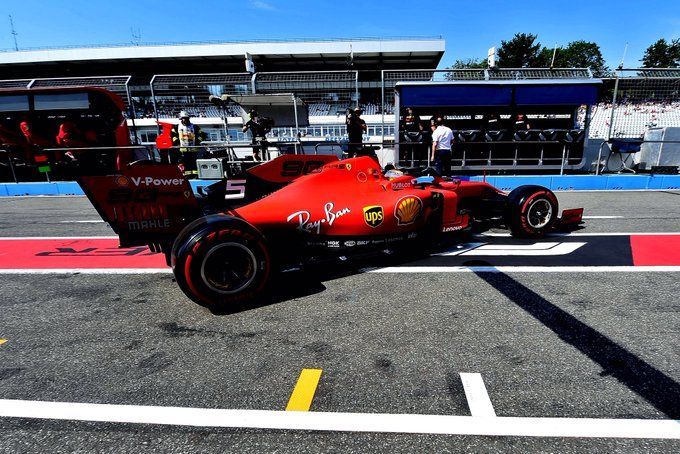 Ferrari led the way in the first practice session of F1 German GP with Sebastian Vettel ahead of Charles Leclerc and Mercedes’ Lewis Hamilton.

The British racer set his time on the medium compound like Mercedes teammate Valtteri Bottas (1m14.660s) in fifth, as the Finn slotted behind Red Bull Racing’s Max Verstappen (1m14.330s) and ahead of Pierre Gasly (1m14.813s).

The Frenchman had vibrations early in the session but looked to have sorted itself as it progressed, while Bottas had a late off in the corner where Vettel crashed out in 2018. The best of the rest mantle went to McLaren’s Carlos Sainz (1m15.062s) in seventh.

Meanwhile, Haas’ Romain Grosjean (1m15.074s) slotted in eighth, with the Top 10 being completed by Racing Point’s Lance Stroll (1m15.191s) and Renault’s Daniel Ricciardo (1m15.567s) 10th, with the former setting his time on the medium compound.

Racing Point teammate Sergio Perez (1m15.604s) was 11th with McLaren’s Lando Norris (1m15.616s) in 12th – both on setting their best time on the medium compound as well. When Bottas had his off, replays showed Ricciardo going for a spin too.

Behind Norris was Haas’ Kevin Magnussen (1m15.759s), who recovered from a senor issue to end up 13th. The Dane stopped on track early to cause a red flag but it was sorted soon. Magnussen was followed by the two Toro Rosso drivers.