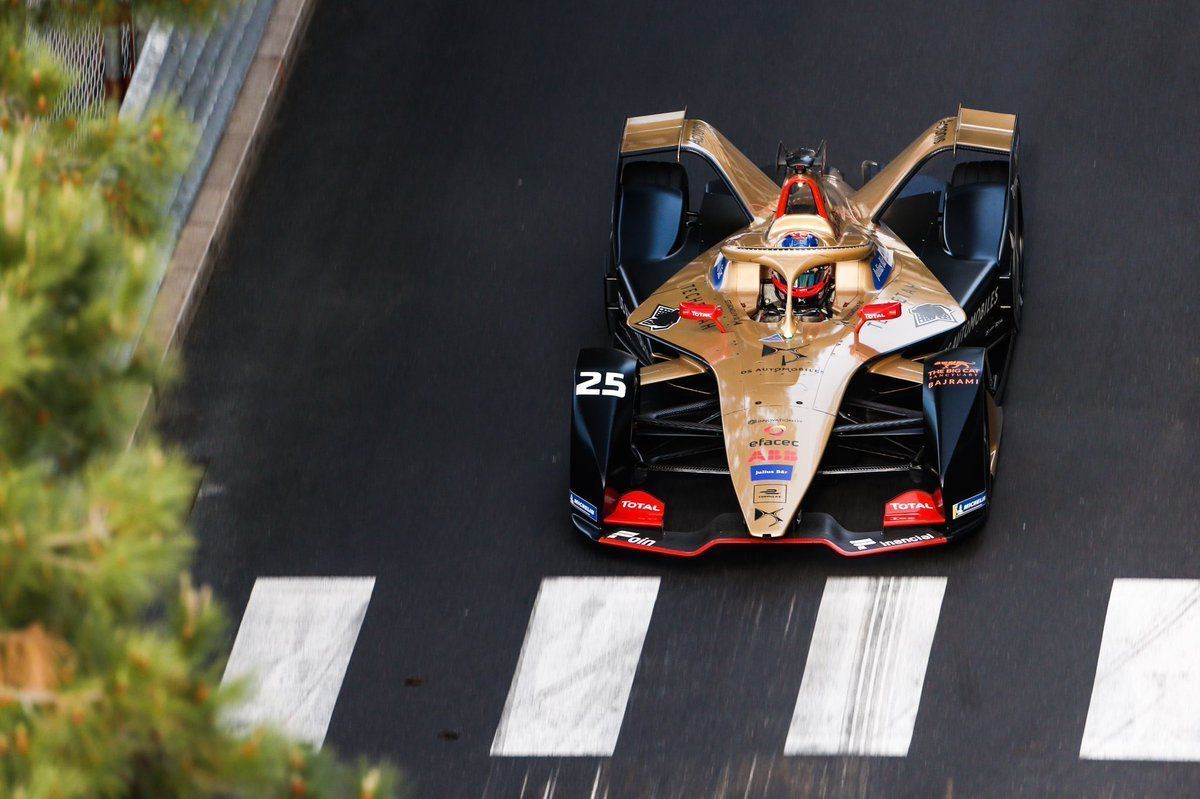 It was a clean start from pole-sitter and DS Techeetah’s Jean-Eric Vergne in the Formula E Monaco EPrix as the Frenchman led the way from Mahindra Racing’s Pascal Wehrlein and the Nissan e.Dams’ Oliver Rowland and Venturi’s Felipe Massa.

While Vergne led the way, Wehrlein locked-up slightly which opened the door for Rowland and Massa pass him as Nissan e.Dams’ Sebastien Buemi also had a look in but couldn’t make the move stick. Behind him, BMW Andretti’s Antonio Felix da Costa looked feisty.

He had Jaguar Racing’s Alex Lynn, BMW Andretti’s Alexander Sims and HWA Racelab’s Stoffel Vandoorne with him but on the charge from outside the points position were Envision Virgin’s Sam Bird and Audi’s Lucas di Grassi.

The duo made headway into the points but the Brazilian eventually lost out when he was bumped into the barrier by Sims, who didn’t see di Grassi in the chicane. There was a Full Course Yellow period to clear debris caused by the front wing detachment.

Midway in the race, Vergne led Rowland as the Top 5 was set with Massa, Wehrlein and Buemi in the order. Bird was the big move to come up to sixth after he cleared da Costa after FCY period. There was also a climb from Evans to eighth.

Despite the bump, Sims was ninth as Envision Virgin’s Robin Frijns progressed to 10th after clearing Vandoorne but the Dutchman retired after a collision with Sims. At the front though, it was close in terms of energy usage but Vergne held on in the end.

The Frenchman became the first driver to be a repeat winner in the 2018/19 Formula E season with the victory in Monaco EPrix. Rowland chased hard but had to settle for second with Massa also managing to defend well from Wehrlein to score his first podium.

Buemi was a lonely fifth in the end with da Costa taking sixth from Evans after a last lap puncture for Bird in the final corner. In eighth was Audi’s Daniel Abt with DS Techeetah’s Andre Lotterer climbing up from last to ninth to score points.

The Top 10 was then rounded out by Lynn, who held off Vandoorne and GEOX Dragon’s Jose Maria Lopez in the end. A fight back from Mahindra’s Jerome D’Ambrosio saw the Belgian finish 13th with HWA Racelab’s Gary Paffett in 14th

UPDATE: The results have changed pretty much with two post Monaco EPrix penalties as a big one sees da Costa being disqualified from the race as it was found that he used 228kW energy on Lap 50 and 51 when only 200kW is allowed.

The team realised the mistake during the race but it was too late by then to rectify and accepted the penalty. The Portuguese driver finished sixth on the road but has zero points now. In another penalty, Abt was handed a drive-through for his collision with Turvey.

It was converted into a 33s time penalty which dropped him to 15th from eighth. There was also an appeal from Mahindra to check on tyre irregularities on Vergne and Rowland but it was rejected by the technical team.

The changed results sees Evans finishing sixth with Lotterer in seventh and Lynn in eighth, while Vandoorne and Lopez got into points as well in ninth and 10th respectively.