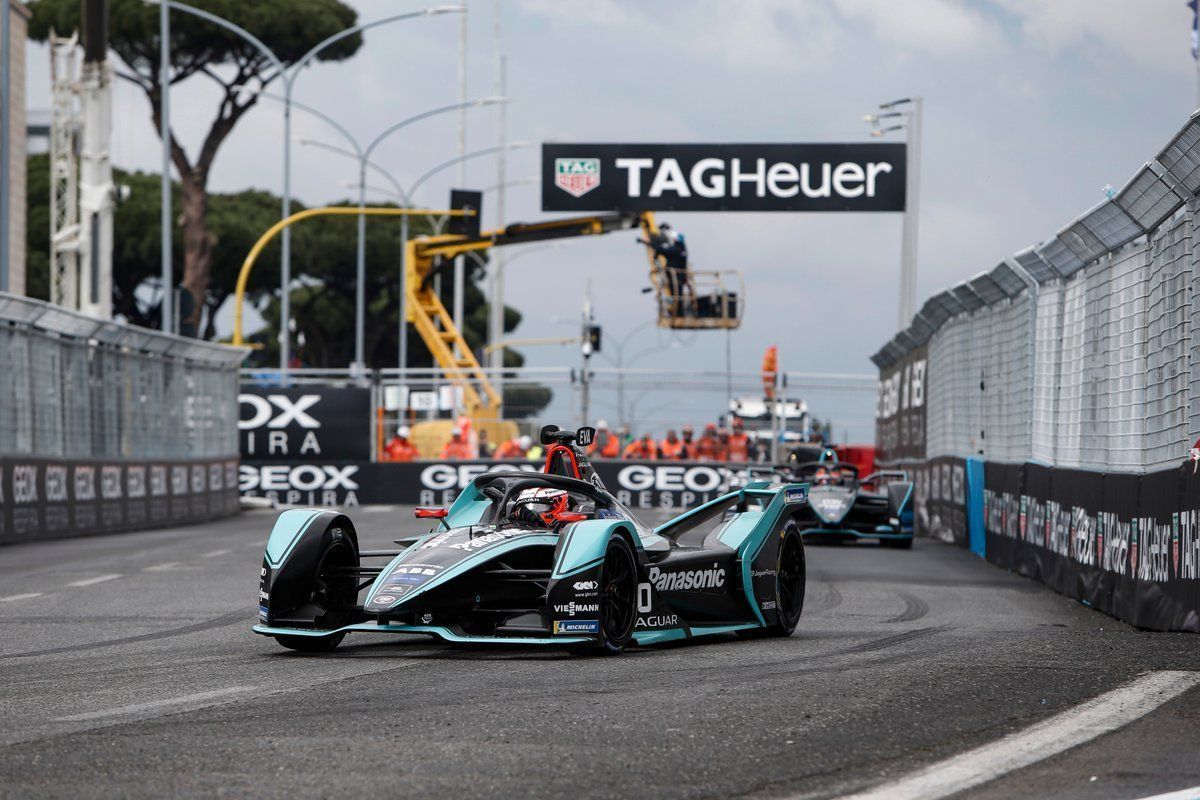 Jaguar Racing and Mitch Evans scored their first FIA Formula E Championship win in Rome EPrix to be the seventh different driver and also the team to do so in 2018/19 season.

Lopez had a moment with Envision Virgin’s Sam Bird as well which nearly cost the British racer his race. Meanwhile, Lopez’s had a spin on his own too where he lost his front wing with the same for BMW Andretti’s Alexander Sims.

While all this was happening, there was more contact behind with Lopez involved again as his moment in Turn 17 put off HWA Racelab’s Gary Paffett as he was then punted by DS Techeetah’s Jean-Eric Vergne to cause a huge traffic jam.

The race was red-flagged immediately but half the field had already completed the lap while the remainder were stuck in the melee. After a lengthy period, the race was re-started with the rest of the field given an extra tour to come on par.

Lotterer held on from Evans and Vandoorne with Buemi in fourth, defending from Frijns and Rowland. At the lower half of the Top 10, Mortara passed teammate Massa for seventh but the Swiss-Italian driver stopped on track to retire the car.

Few laps down, Massa stopped as well to cause a double retirement for Venturi when the Full Course Yellow was deployed. It kept Lotterer and Evans together but the Kiwi finally found a way past the German to take the lead of the Rome EPrix.

Evans made the move from far back in Turn 17 as they touched each other but managed to continue on – the race director though warned them for aggression. The two stuck together until the end of the ePrix as they had to battle with energy consumption as well.

It was a close in the end but Evans eventually hung on to score not only his but also Jaguar’s first Formula E win in Rome EPrix while looked upon by his dad and long-time manager Mark Webber. It was also his first Formula E podium visit.

Lotterer had to content with second as he wait for his first victory with Vandoorne scoring his and HWA Racelab’s first Formula E podium. A late place change saw Frijns into fourth after the Dutchman managed to pass Buemi, who finally finished a race in fifth.

The Swiss driver was followed by Nissan e.Dams teammate Rowland with Vergne in seventh originally but the Frenchman was handed a drive-through penalty for overtaking da Costa under FCY – it converted into a time penalty, dropping him outside Top 10.

Missing on points was Bird in 11th with the British racer fighting through after bringing a half car back into the pits during the red flag period. He was followed by Jaguar’s new signing Alex Lynn with NIO’s Oliver Turvey in 13th.

The penalty dropped Vergne to 14th as he bisected the NIO drivers with Tom Dillmann in 15th ahead of Lopez, who had to serve a drive-through penalty with Sims finishing 16th from Audi’s Daniel Abt and Gunther – the duo pitted one lap earlier but were classified.