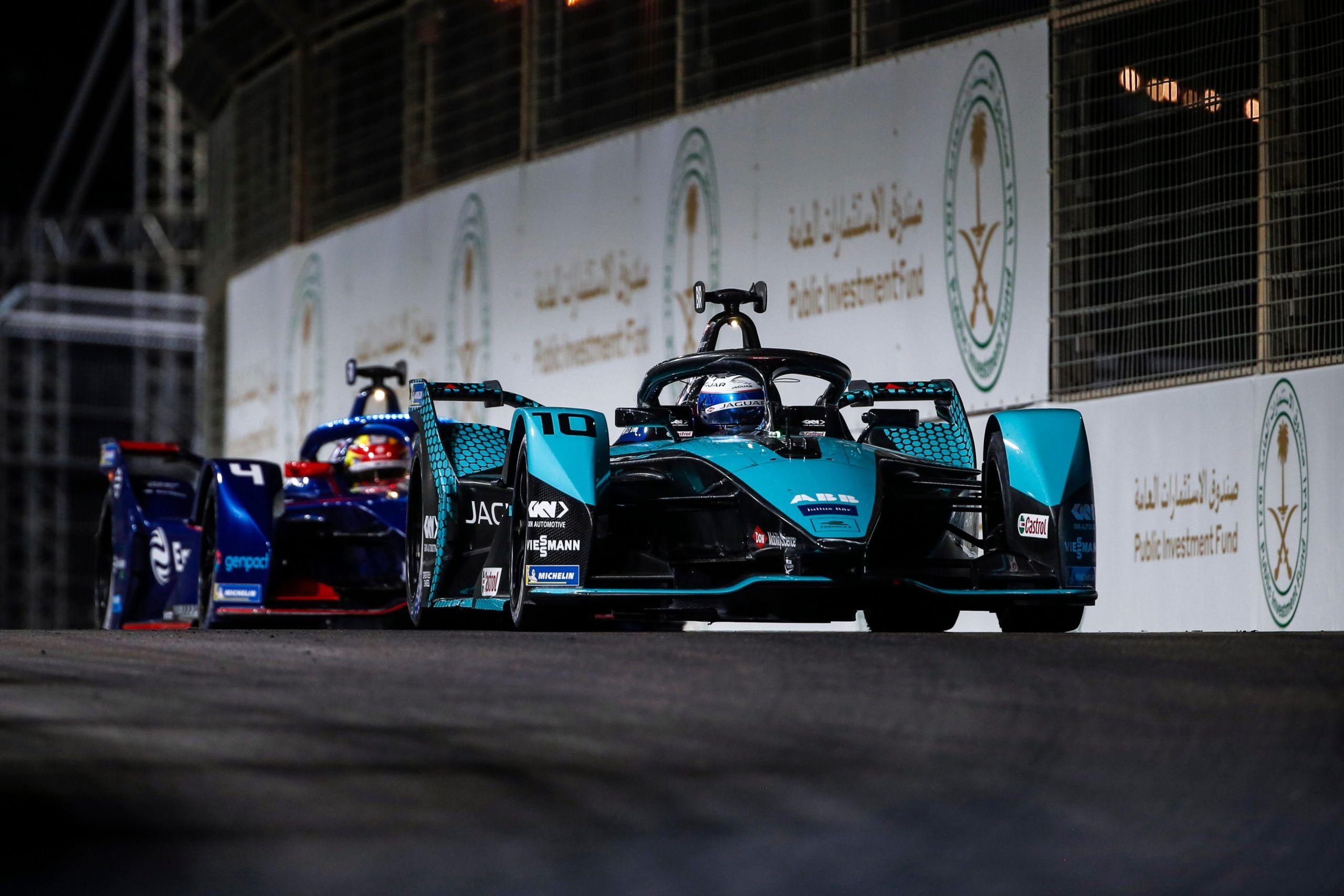 Jaguar’s Sam Bird was victorious in Race 2 of Saudi Arabia Formula E weekend after the race was red-flagged due to late incident.

After the incident with Venturi’s Edoardo Mortara in FP3, the team couldn’t fix the car on time to allow him to compete, after he was cleared by the FIA to race. The clearance also came for both Mercedes and Venturi to race after they missed qualifying.

They started from the back of the field, where Stoffel Vandoorne had a stop and go penalty to get by due to infraction. While it was close at the back, it was same at the front as Bird hurried Frijns for the lead, which he got after using his Attack Mode.

At the same time, the two DS Techeetah cars made up through the field to be third and fourth. But they were squabbling hard where they collided at one point, when Vergne turned right into the corner, leaving da Costa with no space.

The Portuguese dropped behind the Frenchman, as Cassidy was another gainer to be fifth after he passed Camara just when the full safety car was deployed. The Brazilian had his teammate Mueller behind under the safety car with Turvey in eighth.

The Top 10 then had Nissan’s Oliver Rowland in ninth and Audi’s Rene Rast in 10th. The safety car was called in for an incident between Buemi, BMW Andretti’s Maximilian Gunther and Blomqvist, where the German hit the back of the latter while braking in the corner.

Gunther wanted to avoid Blamqvist but was tagged from the back by Buemi. The scuffle caught out Jaguar’s Mitch Evans as well, with the Kiwi, the German and the Swiss racer retiring on the spot, joining Mahindra’s Alex Lynn and BMW’s Jake Dennis.

Lynn’s retirement wasn’t showed but Dennis was hit hard at Turn 1 by Porsche’s Pascal Wehrlein, who was handed a drive-through penalty for causing a collision. The second Saudi Arabia Formula E race, meanwhile, ended under a red flag.

With just 2m45s left on the clock, it was decided that the cars cannot be cleared on time. It gave Jaguar’s Bird his first win of the 2020/21 Formula E season in Saudi Arabia, as there was relief for Frijns in second after running with marginal energy.

It was podium for Vergne in third with da Costa fourth ahead of Cassidy, who secured his best result, along with Camara and Mueller in sixth and seventh. It was another points finish for Turvey in eighth as Rowland and Rast rounded out the Top 10.

While the broadcast did not show replays of Lynn’s crash but social media had a raw footage, which showed the British driver going past the camera upside-down at the same corner where Evans, Blomqvist, Gunther and Buemi had their incident.

The feed revealed that Lynn has been taken to the hospital as the podium ceremony was being completed. His teammate Alexander Sims, meanwhile, was 11th on the road but was classified 17th after an updated result, with Audi’s Lucas di Grassi in 11th then.

UPDATE: There were raft of penalties post-race which shuffled the order from third to last, as Vergne lost his podium to teammate da Costa for not using the second Attack Mode due to red flag. The same was found to be the case for Rast and Blomqvist.

The trio were awarded a drive-through penalty which converted into 24s time penalty. The latter two had further penalties, with the two also found to be speeding under the Full Course Yellows, which added further 24s on their race time.

The same was for Cassidy, who dropped out of points like Rast due to the penalty. Among others, Gunther was handed a drive-through for causing a collision with Blomqvist, while Mahindra’s Lynn and Sims earned their penalties for power out of RESS.

The final result saw da Costa end up third with Camara in fourth, Mueller fifth, Turvey sixth, Rowland seventh, di Grassi eighth, de Vries ninth and Wehrlein 10th – with the latter two getting into points scoring position after finishing out of it.

Lotterer ended up 11th ahead of Vergne, Vandoorne, Cassidy, Sims, Nato, Rast and Blomqvist. There was also update on Lynn’s incident which happened when he ran over Evans’ rear and which turned violent as was upside-down after being airborne.

Here’s what happened with Mercedes and Venturi