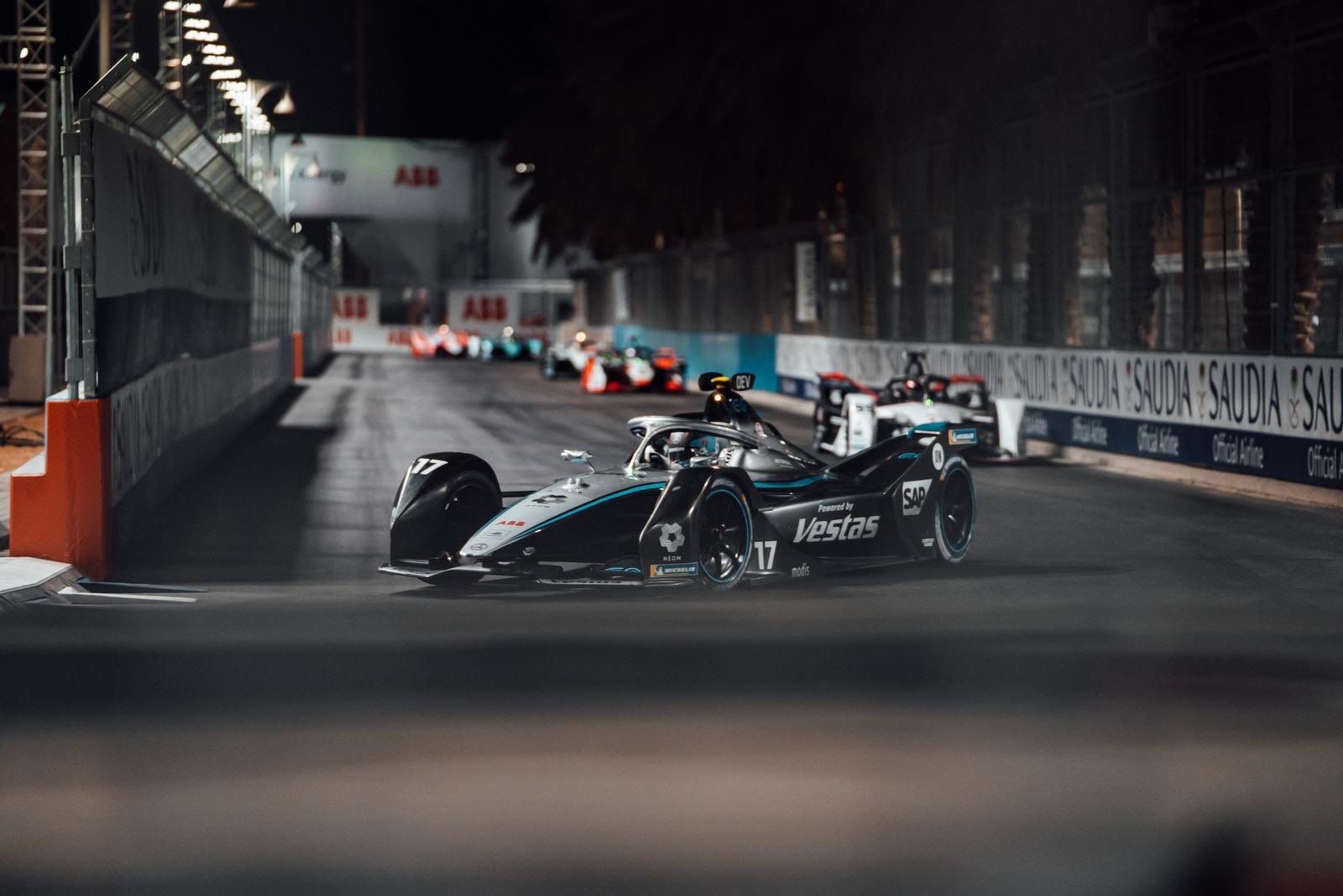 Pole-sitter Nyck de Vries made a good start for Mercedes in Race 1 of the 2020/21 Saudi Arabia Formula E race weekend, as he led Porsche’s Pascal Wehrlein and Audi’s Rene Rast, where the former kept the track position despite having a wheelspin.

But it wasn’t for long as Rast cleared Wehrlein eventually for second, with Venturi’s Edoardo Mortara in fourth. Just behind them was Jaguar’s Mitch Evans, who was another gainer in the field after he passed Mahindra’s Alex Lynn to take sixth.

At the front, de Vries continued to lead the way as the fight behind was heating up after a superb move from Mortara to take third from Evans and Wehrlein. The Monegasque carved his way through between the two drivers after the Kiwi tried a move on him.

The loser in this was Wehrlein, who dropped to fifth, as the safety car was deployed for a collision between Lynn and Bird. The latter had passed the former initially to take sixth but the Mahindra driver retook the position, where the Jaguar driver tried to repass him.

As Bird tried to pass Lynn on the inside, the door was shut by the Mahindra racer in the left-hander which led to a collision, as the move was put under investigation by the stewards. The re-start from de Vries was on point as he led Rast and Mortara in the Top 3.

Evans stood fourth from Wehrlein, where Gunther moved to sixth from Nissan’s Oliver Rowland, who passed Lotterer and Sims. The Top 10 was rounded out by Audi’s Lucas di Grassi, when the safety car was deployed again after a heavy crash for Gunther.

The German slid into the right-hander and rammed his side onto the wall heavily to retire. It was a clean re-start again from de Vries to lead a fighting Mortara and Rast, where the former passed the latter seemingly under the safety car period.

The move was put under investigation as Rast lost third to Evans after the latter’s Attack Mode use. Wehrlein steadied in fifth but Rowland moved up to sixth after passing Sims, with Mercedes’ Stoffel Vandoorne in eighth from di Grassi and NIO’s Oliver Turvey.

It was plain sailing in the end for de Vries as he dominated the proceedings to register his first Formula E win in Race 1 of Saudi Arabia to open the 2020/21 season, as Mortara was second ahead of Evans, who just managed to keep Rast behind despite having less energy.

Wehrlein was fifth with Rowland keeping off Sims and Vandoorne at bay, while di Grassi and Turvey rounded out the Top 10 point scoring position. There was a fiery end outside the points where Nissan’s Sebastien Buemi had a crash due to low energy.

The Swiss racer was 13th behind DS Techeetah’s Antonio Felix da Costa and BMW’s Jake Dennis, with the reigning Formula E champion not having a good start. His teammate Jean-Eric Vergne was 15th behind Venturi’s Norman Nato.