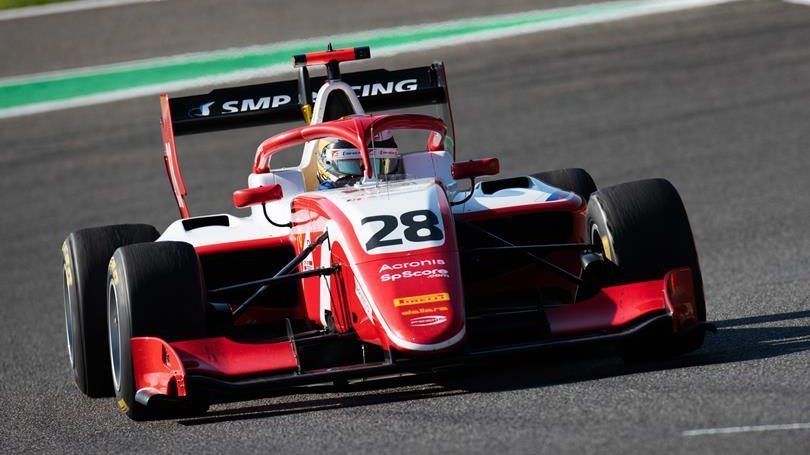 The red flag and subsequent penalties changed the start order of the feature F3 race at Monza with ART Grand Prix’s Christian Lundgaard remaining as the pole-sitter despite the penalty he got.

He had Sauber Junior Team by Charouz’s Lirim Zendeli alongside as he pounced on Lundgaard to take the lead with MP Motorsport’s Richard Verschoor in third after Jenzer Motorsport’s Giorgio Carrara lost places.

Prema’s Marcus Armsrtong was fourth from ART’s Max Fewtrell, who was defending from the other Premas of Robert Shwartzman and Jehan Daruvala, with Jenzer’s Yuki Tsunoda in eighth.

The Top 10 was rounded out by Campos Racing’s Alexander Peroni and Trident’s Pedro Piquet. Meanwhile, at the front, Lundgaard made the move on Zendeli to take the race lead but they made contact at Parabolica.

Zendeli tried to retake the lead but they touched, which punctured the Sauber driver’s tyre and forced him into retirement. Lundgaard continued on but started to lose places before pitting to change the front wing.

It allowed Armstrong to take the lead after he passed Verschoor, who dropped to third when Shwartzman came through. The Russian passed Fewtrell early on as Daruvala closed in on Verschoor for third.

The Indian nearly had a collision with Shwartzman when both were behind Verschoor. He was readying to clear the Dutchman but a safety car period for an incident for Hitech GP’s Juri Vips, halted his progress.

Vips clouted the back of HWA Racelab’s Keyvan Andres, the incident is to be investigated after the race. It was Armstrong leading Shwartzman, Verschoor, Daruvala, Tsunoda in the Top 5 behind the safety car.

The re-start had Armstrong in lead as Daruvala – with DRS issues – passed Verschoor for third immediately, who lost another place to Tsunoda. Behind, Peroni cleared Piquet for sixth place.

There was contact between Pulcini and Fewtrell with both dropping out as Shwartzman passed Armstrong for the lead after a close fight, with Daruvala trying to get through as well in a crucial title fight.

The position stayed the same as safety car was deployed again after a crash for Peroni in the final corner, with the Australian losing out from a solid points finish. Replays showed a hefty shunt for Peroni.

His car hit the sausage kerb at the Parabolica as his car was launched in the air and flipped onto the catch fence on top of the tyre barrier. Peroni got out of the car and was taken to the medical center.

The race ended under the safety car with Prema taking a 1-2-3 as Shwartzman won from Armstrong and Daruvala, with the Russian extending his points lead and having one hand on the F3 title already.

Tsunoda registered another good result in fourth with Verschoor in fifth ahead of Piquet and Hughes. Behind them, Lawson ended up eighth to take reverse grid pole for Sunday’s sprint F3 race.

The Top 10 was then completed by Sauber Junior Team by Charouz’s Fabio Scherer and Carlin’s Logan Sargeant as Felipe Drugovich missed on a points finish, with Pulcini behind.