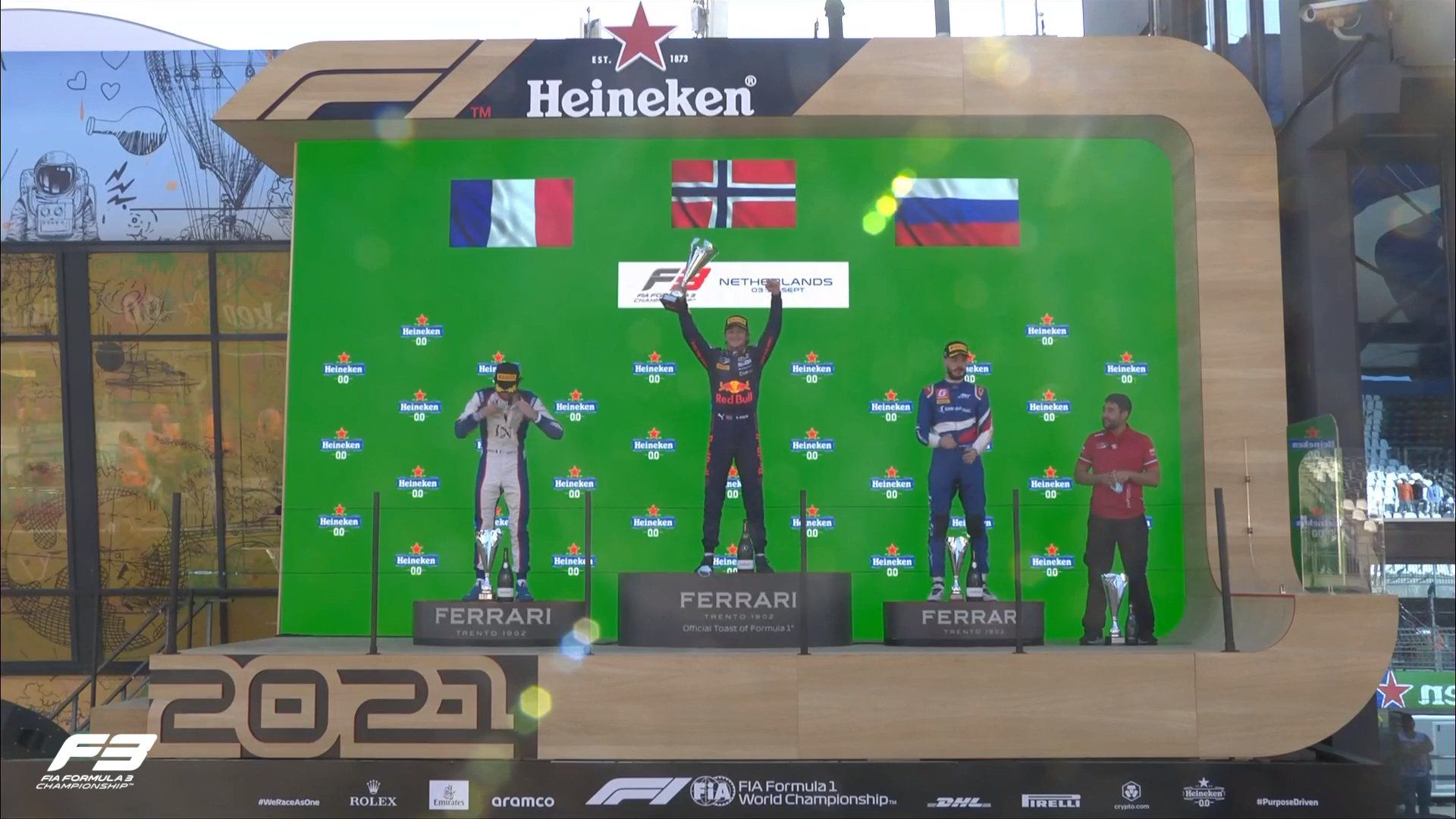 Arthur Leclerc, Victor Martins and Dennis Hauger shared wins in the three FIA F3 races at Zandvoort, with the Norwegian closing in on the title.

The Lap 1 saw incredible action with Leclerc jumping from P3 into the lead from the outside at Turn 1. Sargeant did not make it any easier for Leclerc to hold onto the lead as the American was right behind, applying pressure on the Monegasque. Hirech GP’s Ayumu Iwasa up into P3 from his P4 start and was applying just as much pressure on Sargeant for P2 all the way through.

Cordeel, who dropped to P4, was then spun by ART GP’s Alexander Smolyar in Lap 1. Smolyar made contact with Cordeel’s rear left tyre that forced him to spin. The Belgian was able to rejoin the track and continue, but he was last. The incident was put under investigation by the FIA and ultimately landed Smolyar a 10 second stop and go penalty for causing the collision, which he served in Lap 6 as he went to change his damaged front wing.

The first lap still had more in store, as HWA Racelab’s Oliver Rasmussen and Jenzer Motorsports’ Calan Williams went off on the gravel as they went wide at Turn 11. At the front, the chase was still on between Sargeant and Leclerc, with the former looking to snatch the lead. Turn 1 on Lap 7 saw a huge lock up from Leclerc, but he still managed to make the turn and stay in the lead.

Yellow flags were urged by the stewards to clear up the debris on track as the gravel had accumulated at Turns 11 and 12. Prema’s Ollie Caldwell and Campos Racing’s Lorenzo Colombo were fighting for P11 on Lap 12, with Caldwell snatching the position from Colombo after an incredible late braking move on the inside line. Prema teammate, Dennis Hauger, was just as ambitious in his overtaking moves as on Lap 14 as he attempted overtaking MP Motorsport’s Victor Martins for P7 on the chicane, but ended up in the gravel and returning to P9 on track behind Trident’s Clement Novalak.

Hauger continued his overtaking into Turn 12, racing Novalak side by side on the banking and on the start/finish line where he was ahead of the Frenchman but Turn 1 saw him fall back once again to P9. The safety car was deployed on Lap 17 as Jenzer Motorsport’s Jonathan Hoggard found the wall, when Charouz’s Hunter Yeany collided with Hoggard’s right at the exit of Turn 1. Yeany was also in the gravel at Turn 2 as he suffered a puncture.

Lap 21 saw the cars resume racing and Leclerc was able to get away and widen the gap to Sargeant a bit more as Sargeant was also focused on the pressure by Iwasa in P3. With 3 laps to go, Hauger reattempted to take P7 from Martins, going side by side through turns 2 and 3 with the Norwegian coming out on top and into P7.

The chequered flag on Lap 24 saw Leclerc take his second victory in F3, followed by Sargeant and Iwasa in P2 and P3 joining him on the podium. Hitech GP’s Jack Crawford, MP Motorsports’ Caio Collet and Trident’s Jack Doohan finished in P4, P5, and P6 respectively in a fairly steady outing. Hauger pulling through P7 with Martins following in P8. ART GP’s Frederick Vesti came in P9 and Caldwell rounded it off in P10. 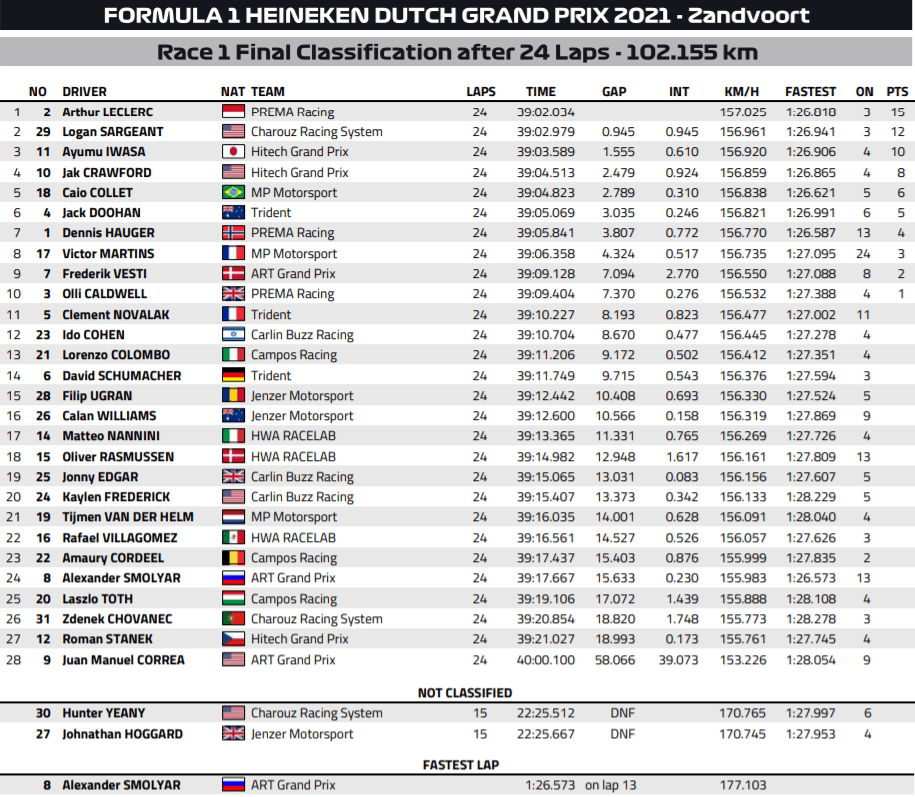 The starting positions for Race 2 of F3 weekend at Zandvoort saw Carlin Buzz Racing’s Ido Cohen on pole, followed by Novalak and Caldwell in P2 and P3. Cohen was not P1 for long, however, as lights out saw Novalak get a great start into Turn 1 and where he took the lead.

The beginning of Lap 3 saw a battle between PREMA teammates, Hauger and Caldwell all the way through the first sector. The side by side racing saw Caldwell always keep his nose just slightly ahead, intensity was high up until turn 7 where the yellow flags in sector 2 urged Hauger to yield and stay behind his teammate in P6.

Meanwhile, Colombo suffered a left rear puncture that caused him to run into the wall in sector which was what brought out the yellow flags and also deployed the safety car. Racing resumed on Lap 6 with Novalak making a clean getaway from Cohen in P2, who had Vesti right beside him through Turn 1. Martins plunged down the inside of Turn 3 and snatched P3 from Vesti who left room for the Frenchman to overtake him as the Danish was focused on Cohen for P2.

Crawford and Doohan went side by side on Lap 8, where the American had a major lockup on the inside of Turn 1 but was able to hold onto his P9 position. Race leader Novalak was under tremendous pressure by Cohen in P2 during Lap 9 as only 0.5 seconds separated the two with DRS used. Cohen’s chase for P1 was short lived, however, as Martins was able to snatch P2 from the Carlin Buzz driver at Turn 1 on Lap 14 using DRS. Cohen goes down another grid position to P4, on Lap 15 as Vesti manages to get past him also down Turn 1.

The action at the front was far from over as the two Frenchmen were battling it out for P1 on Lap 16. With only 7 laps to go Martins was able to overtake Novalak on the outside of Turn 1! Lap 18 saw Hauger finally succeed in the overtake for P5, as he moved up past teammate Caldwell, leaving the Brit in P6. Moving up another position on Lap 19, Hauger passed Cohen for P4.

The safety car was deployed on Lap 20 as Cordeel spun around and into the gravel at Turn 1. With just two laps to go after the end of the safety car, Hauger and Cohen made contact leaving the championship leader with a rear puncture and no points as he dropped down the grid. Turn 9 also saw a spin by Carlin Buzz Racing’s Jonny Edgar that brought out the yellow flags.

The last lap of the race was looking good for Doohan in P8 but he ran wide onto the gravel and out of the points into P19. The chequered flag saw a French 1-2 with Martins taking his first F3 victory, followed by Novalak in P2. Vesti, Collet, Schumacher ended up P3, P4 and P5, with Prema teammates Caldwell and Leclerc in P6 and P7. Crawford, Nannini, and Sargeant rounding off the points for Race 2 in P8-P10. 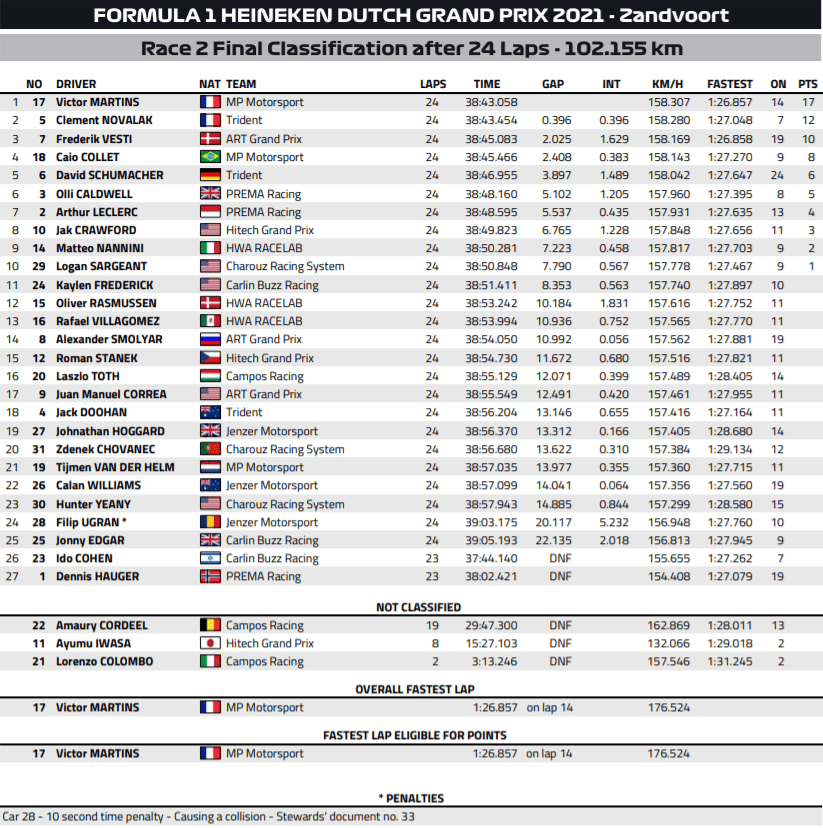 The starting grid for the final F3 race at Zandvoort saw Hauger in pole position after his qualifying on Friday, with Trident’s Schumacher in P2 and Martins in P3 in the second row. Hauger made a strong start to remain in P1 through Turn 1. The top 3 steadied in their positions, but Doohan struggled at the start, dropping from P4 to P6.

Collet lost a lot of momentum as well on Lap 1, going down the grid from his initial P6 but Lap 2 saw him moving up again as he passed Sargeant for P8. Lap 3 saw the the Brazilian right behind Crawford, applying pressure for P7, but unable to do so in this lap. Crawford who was out of DRS range to the Doohan in front gave Collet the chance to overtake him in Lap 12, as Collet eventually made the overtake to move into P7.

Crawford was struggling with the pace a bit during the race and Lap 18 saw him getting overtaken by Sargeant after a lockup, which dropped him down to P9. Lap 19 saw near contact between Juan Manuel Correa’s ART GP car and Nannini’s HWA Racelab car, which caused the latter to run wide in Turn 1. The incident was under investigation by the FIA. Correa got a 10 second time penalty for forcing Nannini into the gravel.

With just three laps to go Schumacher and Martins make contact in Turn 3. The Frenchman clipped the back of Schumacher’s Trident and ran him into the wall and out of the race. The incident brought out the virtual safety car and a 10 second time penalty for Martins. The chequered flag saw another F3 win for Hauger, where Novalak gained couple of places to be second with Smolyar third, after the earlier incident.

The gains were also for Doohan, Collet and Sargeant, who ended up fourth, fifth and sixth respectively, as Crawford was seventh, Vesti eighth, and Leclerc ninth. Martins rounded off the points position despite his 10 second time penalty. 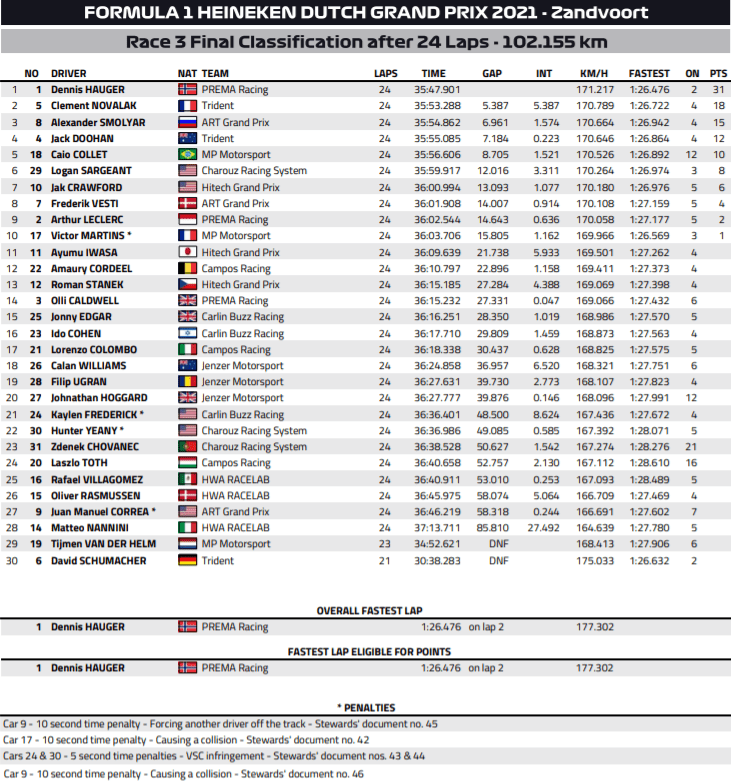