It was overcast conditions in Baku for the feature F2 race, as pole-sitter Liam Lawson lost the lead to Hitech GP teammate Juri Vips at Turn 1. The Kiwi then defended hard from ART’s Theo Pourchaire, who was ran deep towards the pit exit wall from him.

The move was put under investigation, with Lawson handed a 10s penalty. Moments later on Lap 1, Carlin’s Dan Ticktum, Pourchaire and DAMS’ Marcus Armstrong had a collision at Turn 4, where the Brit tried an opportunistic move on the inside.

Armstrong turned in the corner from the outside, as he collided with Pourchaire at the same time, when Ticktum collided with the Frenchman. While the former two retired immediately to cause a safety car, the latter pitted for a front wing change.

Ticktum was handed a 10s penalty, much to his disappointment. On the road, Vips led Lawson post the safety car after the Kiwi passed Piastri for second. Campos’ Ralph Boschung was fourth with Carlin’s Jehan Daruvala moving up to fifth.

UNI-Virtuosi Racing’s Guanyu Zhou ran sixth from teammate Felipe Drugovich and Prema’s Robert Shwartzman, who was the biggest mover after the safety car. He not only passed both the Virtuosi cars, but also Daruvala and Boschung in the order.

The pit stop saw Vips lose to Piastri, but the Estonian retook the net lead, with Shwartzman in third after penalty to Lawson. Boschung ran behind the Russian, with Drugovich making up places after passing Daruvala, who was also passed by a recovering Lawson.

ART’s Christian Lundgaard tucked behind Daruvala, with Charouz’s David Beckmann right behind. The German had a solid fight against Zhou and Lawson earlier in the race, where the Kiwi managed to get by both, after the Chinese racer went off at Turn 1.

Meanwhile, at the front, Ticktum led HWA Racelab’s Jack Aitken on the alternate strategy, ran deep in the F2 race, where the Brit gained from it as post his stop, he came out in 10th. At the front, Vips took race lead from Piastri and Shwartzman.

Piastri had 5s penalty for unsafe release, but had enough gap to Shwartzman, as Drugovich was up fourth after clearing Boschung, who had Lawson to defend from. Daruvala was seventh with Ticktum clearing both Beckmann and Lundgaard to be eighth.

Despite the gain from Piastri, Vips had enough to register a second straight F2 win in Baku in the feature race, with the Australian maintaining second from Shwartzman in the Top 3. Drugovich did well in fourth, with Boschung continuing his run in fifth.

Lawson salvaged sixth from Daruvala, who had enough to keep Ticktum behind, as Lundgaard was ninth and MP Motorsport’s Lirim Zendeli 10th, after he cleared Beckmann on the last lap to take the final point away from the German.

UPDATE: After the known penalties to Ticktum, Lawson, Verschoor and Deledda in the F2 race, post-race, the FIA shared report of a second penalty to Deledda and also one to Beckmann for two separate offence in the feature event.

It was, in fact, Deldda’s first offence in the race, when he collided with Samaia on the braking zone of Turn 2. He was handed a 10s time penalty for that and a further penalty, which was noted on TV, as well, was for ignoring blue flags.

For Beckmann, meanwhile, it was a five second penalty. He was found to have breached the Race Directors’ note. The statement from the FIA stated: “Having considered the matter extensively, the Stewards determined that Car 14 left his pit bay and drove down the pit lane with only two wheels in the fast lane for a considerable distance, in contravention of the Race Director Event Notes Item 8.3, which requires drivers to move to the fast lane as quickly as possible.” 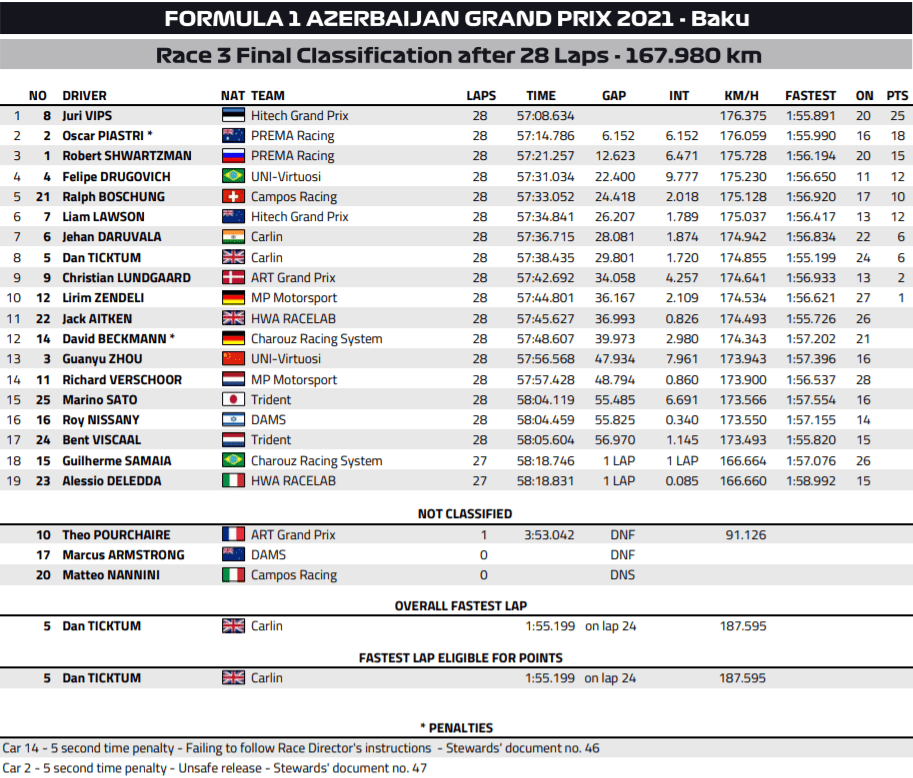