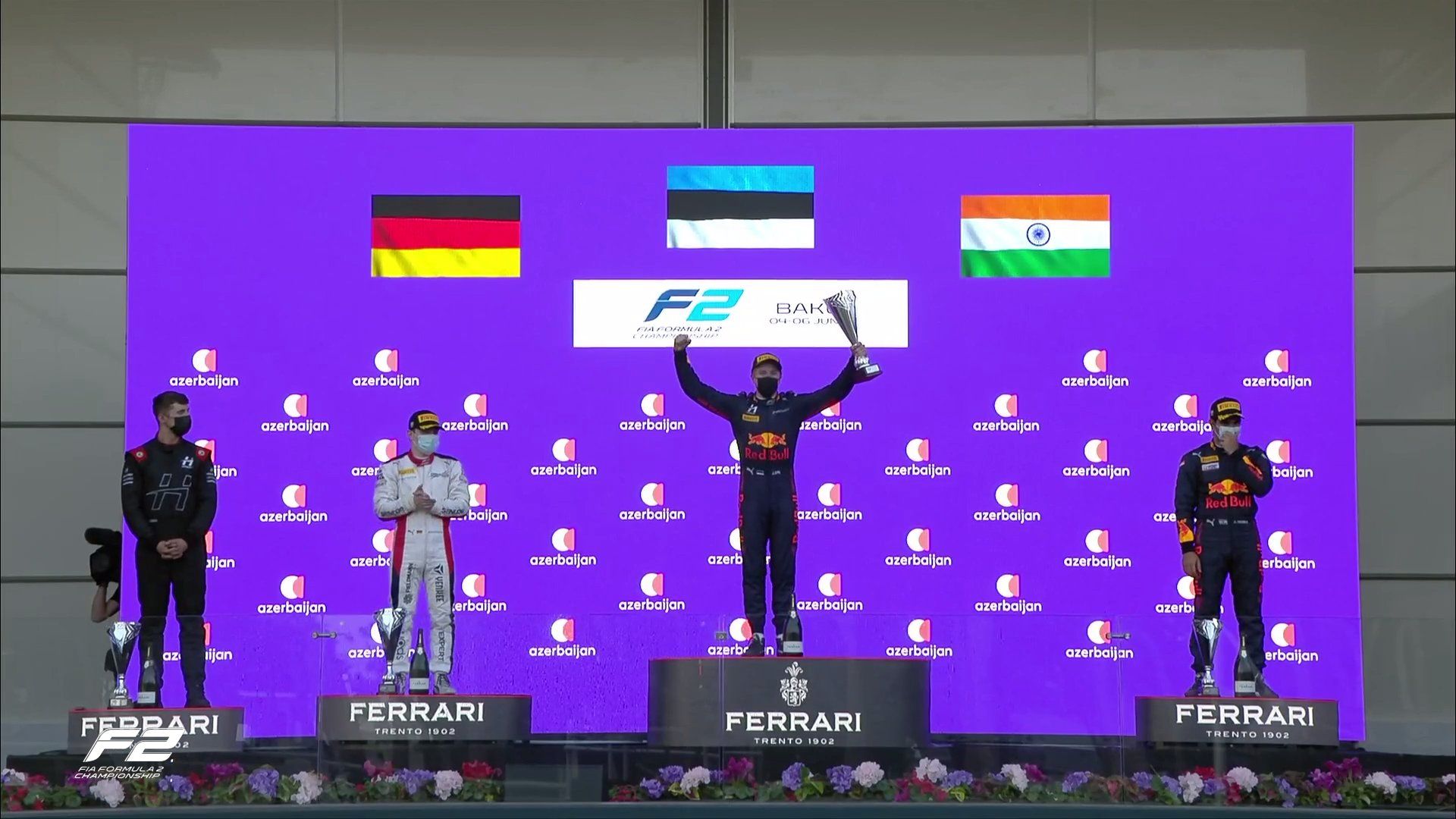 The Top 10 reversed Race 1 in Baku F2 weekend had pole-sitter Robert Shwartzman led the way in his Prema from Carlin’s Jehan Daruvala and UNI-Virtuosi Racing’s Guanyu Zhou in the Top 3, as safety car neutralised the race after multiple incidents.

A push from UNI-Virtuosi Racing’s Felipe Drugovich on Prema’s Oscar Piastri at Turn 3, unsettled the Australian, who then bumped into Hitech GP’s Liam Lawson. It was race over for the Kiwi after he bumped into the barrier.

It was racer over for Piastri as well, with Drugovich handed a 10s time penalty for causing a collision. The race also ended for HWA Racelab’s Jack Aitken, who spun at Turn 1 after riding a kerb, with Alessio Deledda stopping at Turn 2 due to an issue.

There was a fight between Boschung and Ticktum for the fifth place, which the Swiss driver initially held onto but lost out eventually. It was same between Vips and Pourchaire, where the Estonian gained on the Frenchman, but the latter fought back to retake it.

At the front, Daruvala lost to Zhou and also to his teammate Ticktum, who cleared Armstrong in quick time. The Brit wasted no time to get through the Chinese driver as well, to move himself up to second in the chase to Shwartzman.

Zhou was third with Daruvala fourth from Armstrong, who had the train of Boschung, Pourchaire and Vips on his tail. The Kiwi pushed the Indian for a couple of laps, but he came under pressure from the Frenchman, who passed the Swiss racer.

Pourchaire didn’t wait long and passed Armstrong towards the end as the Kiwi even lost to Boschung, leaving him to defend from Vips. At the front, Shwartzman eased in to win Race 1 of Baku F2 weekend, with Ticktum and Zhou rounding off the podium places.

Daruvala hung on to fourth despite the late surge from Pourchaire, with Boschung in sixth from Armstrong, who kept seventh after keeping off Vips by just 0.069s. Drugovich ended up ninth on the road but a penalty dropped to 14th in the order.

It moved Beckmann to ninth, with Trident’s Bent Viscaal in 10th – which meant a reverse grid pole for the Dutchman for Race 2, even though it was no points for either the German and him in Race 1. ART’s Christian Lundgaard ended up 11th eventually. 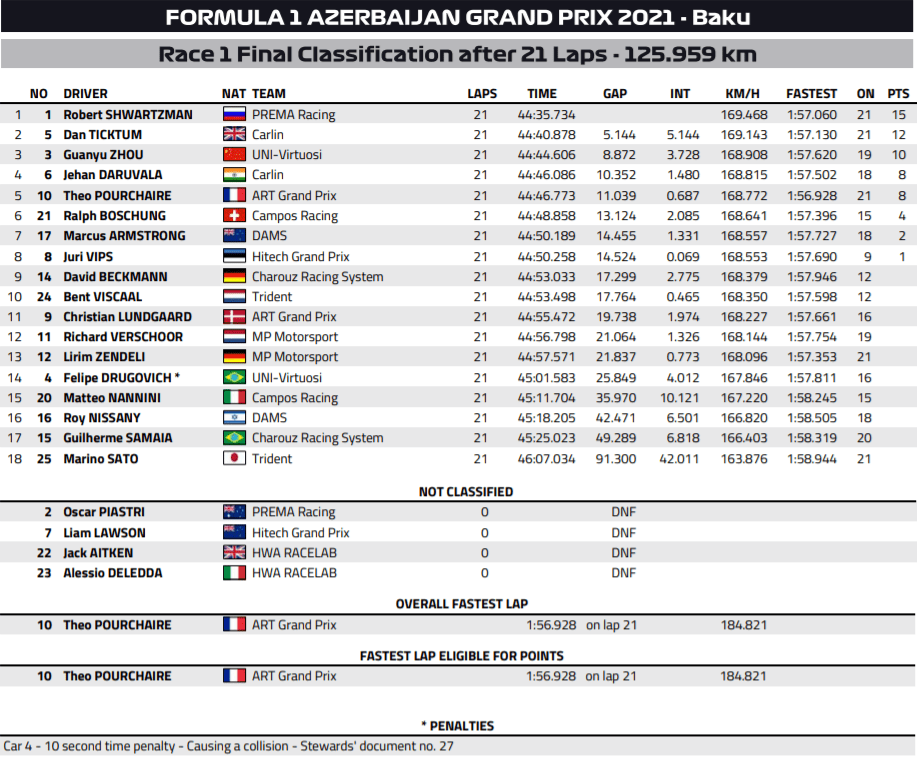 The Race 1 Top 10 reverse grid Race 2 in Baku saw Beckmann lead from Viscaal at the end of the first lap after the Dutchman lost his lead mid-way in the lap after starting from pole. There was a safety car to neutralise the race due to multiple incidents.

A pedal jam for Zhou left him vulnerable in the mid-pack, as he collided with Ticktum at Turn 1. The Chinese racer retired immediately, but the Brit continued after joining at the back of the pack. MP Motorsport’s Zendelli also went off there to retire.

Just as the above incident took place, there was a clash between Boschung and Pourchaire at Turn 1. The Frenchman was on the inside, with the Swiss in the middle and Daruvala on the outside. When the Indian turned for the corner, it left Boschung little space.

Boschung’s race ended as Pourchaire’s front wing broke, which forced him to pit. At the re-start, Beckmann led Viscaal in the front, as Vips and Daruvala exchanged places in the fight for third, with the Estonian managing to keep himself ahead.

Armstrong was fifth from Shwartzman, with MP Motorsport’s Verschoor gaining places to be seventh from Drugovich, DAMS’ Nissany and ART’s Lundgaard in the Top 10. Before another safety car period, Vips managed to clear Viscaal for second.

The safety car was for Nissany running into the back of Verschoor, forcing the Dutchman to retire. The Israeli dropped down the pack and was handed a drive-through penalty for causing a collision. As drivers roared for the second re-start, there was another VSC.

After Daruvala cleared Viscaal for third in that brief period, Armstrong chased the Dutchman for fourth but with cold tyres, he rammed onto the barriers. This happened on the same lap, just after Lundgaard went into the barriers while jostling for positions.

Post the VSC re-start, Vips wasted no time to clear Beckmann for the lead, which he comfortably held on to win Race 2 of the Baku F2 weekend. Behind, the German fended off race-long push from Daruvala, who had Viscaal and Shwartzman on his tail.

Eventually, all four maintained their positions, with Viscaal registering his best F2 result. Behind this pack, it was a charging drive from Ticktum to sixth, with Lawson also moving himself up to seventh along with Piastri in the Top 8 points places. Pourchaire rose back up to ninth with Drugovich ending up 10th. 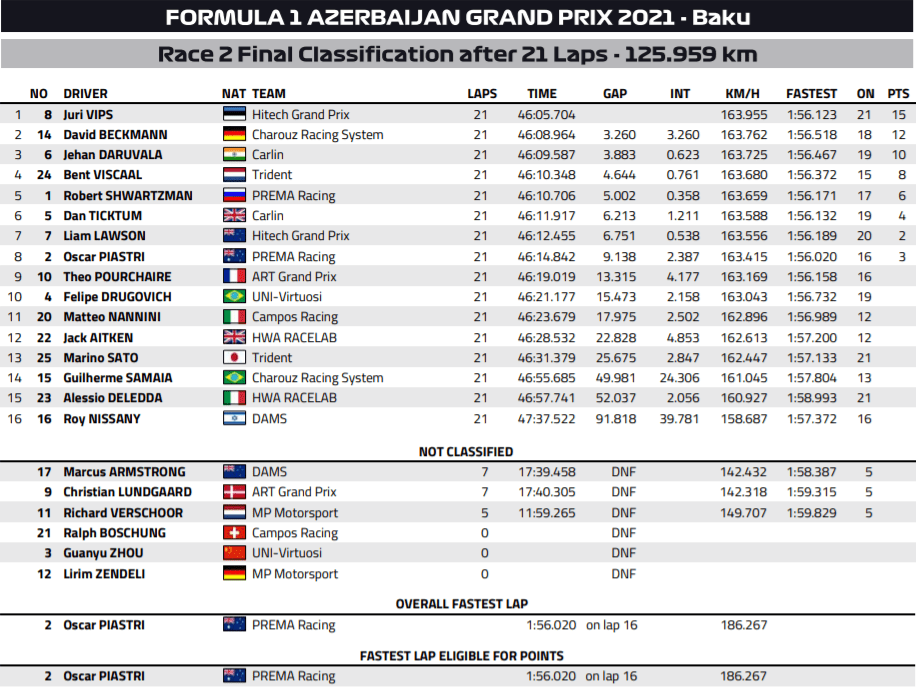