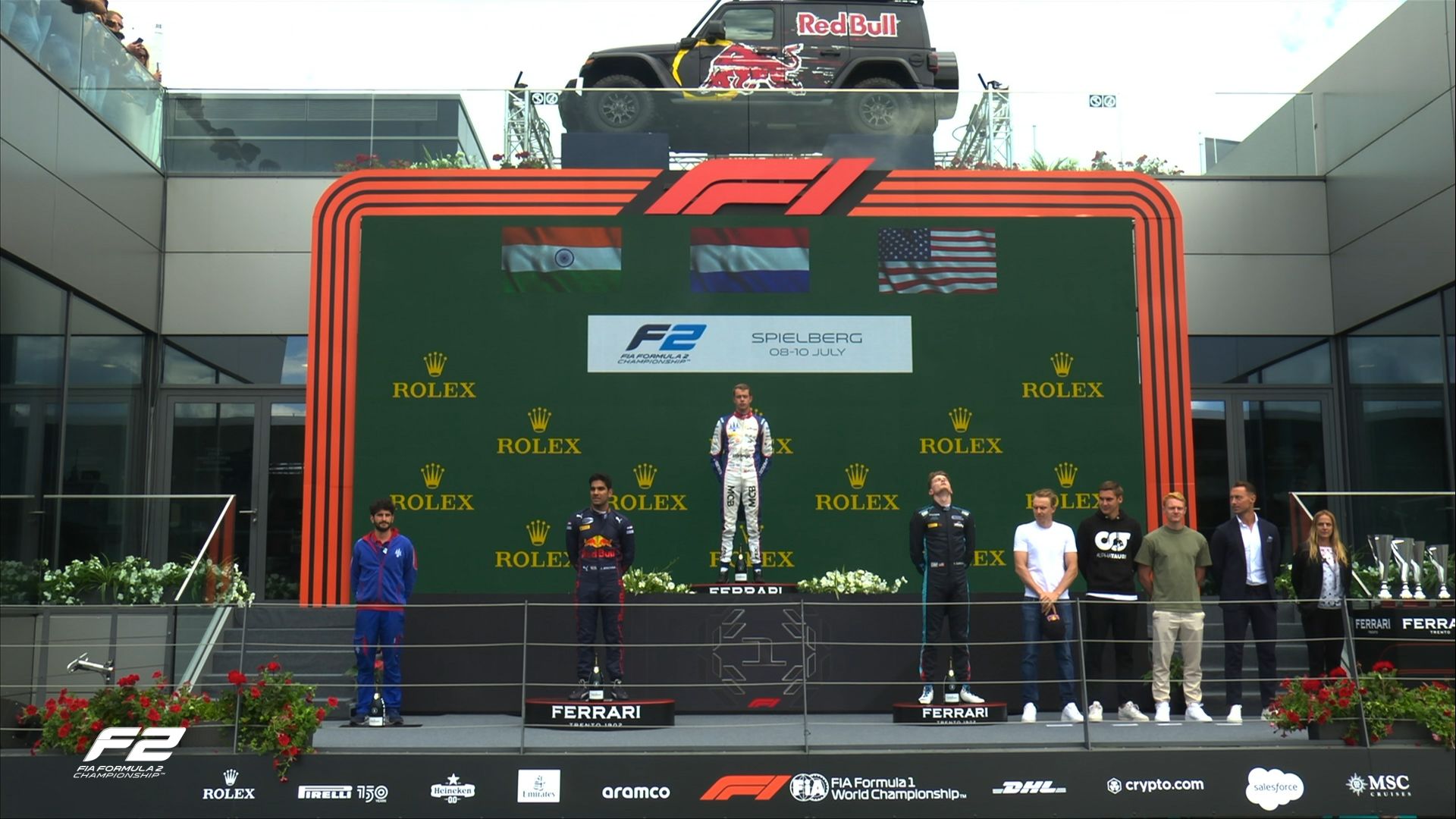 The Red Bull Ring circuit was dry on racing line but wet around it which meant a lot of the front-runners were on the wet compound as Hitech GP’s Juri Vips took the lead from pole-sitter Frederik Vesti in ART car with DAMS’ Ayumu Iwasa in third.

Hitech GP’s Marcus Armstrong came to a halt at Turn 4 when he went a bit wide and while re-joining had a moment with Daruvala. The Indian was on the slick tyres along with the Kiwi, with Verschoor being the first driver on the dry tyre in the Top 10.

It soon came into play as everyone on the wet compound started to struggle and it put Verschoor onto the lead from Daruvala. Behind them, Campos’ Roberto Merhi moved up to third with Prema’s Dennish Hauger fourth and Charouz’s Enzo Fittipaldi in the Top 5.

It kick-started the pit stop for the slick runners as Verschoor kept the net lead from Daruvala, who was back in second. Merhi steadied in third from Sargeant, who was the only one from early wet runner to make a mark in the feature F2 race.

But he had Fittipaldi on his tail for long after he cleared Lawson and Hauger to be fifth. Vesti was eighth but had a 5s penalty for gaining an advantage as Iwasa was ninth from Hughes where the Brit also had a penalty for track limits.

There were plenty of track limits warning for multiple drivers, but Verschoor stretched a good lead from Daruvala, who started to struggle towards end which brought Merhi into the fight for second. Sargeant steadied in fourth from Fittipaldi in the Top 5.

Verschoor eventually claimed the feature F2 race win in Austria but stopped on track after crossing the chequered flag. Daruvala lost second to Merhi on the final lap, but a 5s time penalty for Spaniard helped the Indian to be second eventually.

Sargeant made the wet tyre strategy work to third with Fittipaldi in fourth from Mergi, who ended up fifth. Hauger was sixth from Hughes Caldwell, Iwasa and Vips in the Top 10, where Lawson dropped outside of points due to track limits.

UPDATE: After Verschoor stopped on track post the chequered flag, the fears of lack of fuel rumbled on amid the team and with the driver. The worst fears came true with the team unable provide the minimum required sample of 0.8 kg which resulted in his disqualifcation.

“During the after-race Scrutineering Car 20 was not able to provide a fuel sample of
min. 0.8 kg. Only 31.3 grams of fuel could be extracted from the car. This is not in
compliance with Art. 14.6 of the Technical Regulations,” the statement said.

This would have handed Daruvala a feature F2 race win, but the Indian driver was summoned for his team allegedy drying his grid spot. It was proven that they did so which meant he was handed a drive-through converted to a 20s penalty.

This cost him a win as he dropped to 12th in the final results, with Sargeant winning from Fittipaldi and Merhi as Nissany and Lawson ended up in the points. “Having considered the matter extensively, the Stewards determined that the team attempted to dry the track surface at their grid position prior to the race start by applying the fans normally used to cool the engine to the ground directly in front of the rear wheels of Car 2.

“This has been witnessed and reported by the Technical Delegate. As a performance advantage can never be ruled out in such a case, the mere attempt to alter the track surface is prohibited irrespective of any success. Therefore the infringement is penalized accordingly,” summed up the stewards note. 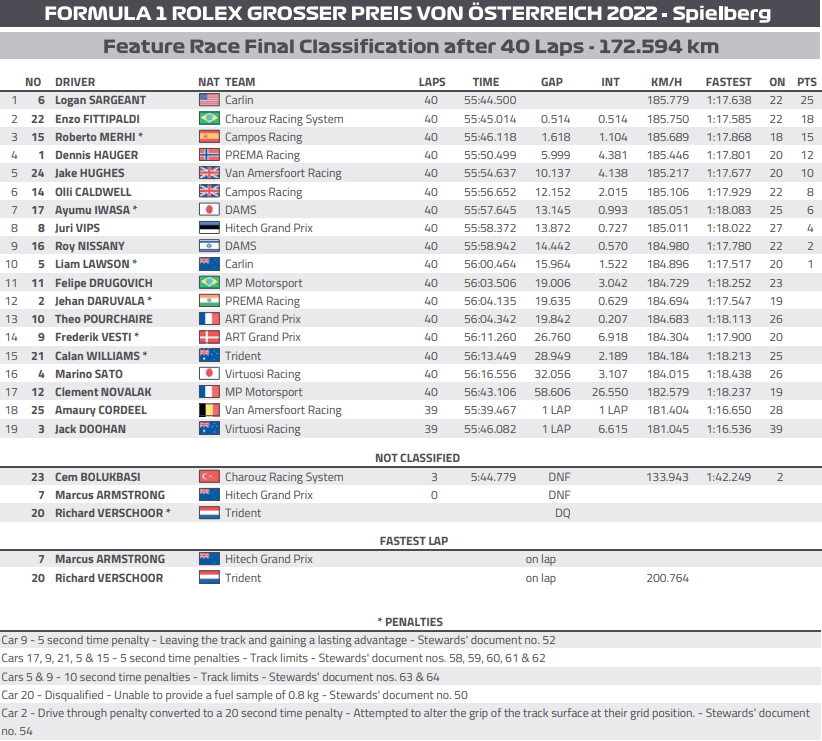 One of the biggest challenges the grid has tackled so far this season awaited them in today’s Sprint Race, as heavy rain at the Red Bull Ring saw the drivers face a contest of attrition on wet tyres. With standing water everywhere and spray creating a lack of visibility, it was up to maiden pole-sitter Hadjar to lead the field away in a rolling start.

Despite having never started from the front row in Formula 3, Hadjar nailed his launch allowing him to hold off an attack from Championship leader Martins. However, an error saw the rookie run wide into Turns 1 and 9, allowing fellow Frenchman Martins to close in on him. Nevertheless, the ART Grand Prix driver wasn’t immune to mistakes, and taking too much kerb into the final corner almost proved to be his undoing. A lucky save stopped Martins heading into an early spin but dropped him nearly a second behind the leader.

The pair’s duel wasn’t slowing them down, as they continued to pull a gap to the PREMA duo of Bearman and Leclerc behind. As predicted, conditions began to ease, and with a drier line beginning to form along the 4.318km circuit the field urgently searched for wet patches of tarmac in order to run the blue-walled tyres to the end of the race.

It was an all-Red Bull battle over seventh, as juniors Jak Crawford and Jonny Edgar fought hard. While the PREMA looked to be the quicker of the two, it was the Trident who kept the American at bay. This allowed Maloney to close up on the pair.

On Lap 11, Caio Collet dived down the inside of Maloney for ninth, but couldn’t make the move stick. Overly eager on the throttle, the MP Motorsport driver suffered a big snap and almost lost control. Luckily, he was able to just hold on but had to set about catching up to the Bajan driver once again.

Two laps later and the pair continued to battle. Utilising the cutback out of Turn 3, Collet got past Maloney, who refused to give in, going side-by-side until Turn 8 in a heart-stopping run but the Bajan driver wasn’t quite able to make it stick.

In a repeat of Saturday’s events, the two PREMAs of Bearman and Leclerc once again got their elbows out as they fought over third. This battle soon ground to a halt, however, as the Safety Car was deployed on Lap 19. Further contact between the two Charouz cars had beached Chovanec in the gravel at Turn 4.

Consequently, the lead Hadjar had fought hard to build vanished in an instant and it all came down to his restart once again three laps later. Despite the pressure on his shoulders, the Hitech driver didn’t falter and Hadjar pulled away from Martins, as chaos unfolded behind. A disastrous restart for Crawford, Edgar and Collet sent the trio into a spin and dropped them well outside the points.

As the penultimate lap got underway, Stanek made a last-ditch attempt to get past Hitech’s Kaylen Frederick for fifth, which resulted in the American driver getting a puncture and falling outside of the points.

As the drama ensued behind, Hadjar looked calm and collected as he crossed the line to collect the win and make it two Red Bull junior victories at their home weekend. Martins held on to fourth, ahead of Bearman, Leclerc, Maloney, Stanek and Colapinto. The biggest beneficiaries from the chaos were Smolyar in the red MP Motorsport car and the Jenzers of Alatalo and Cohen who had slowly but surely moved their way up through the field, capitalising on mistakes ahead to finish inside the points. 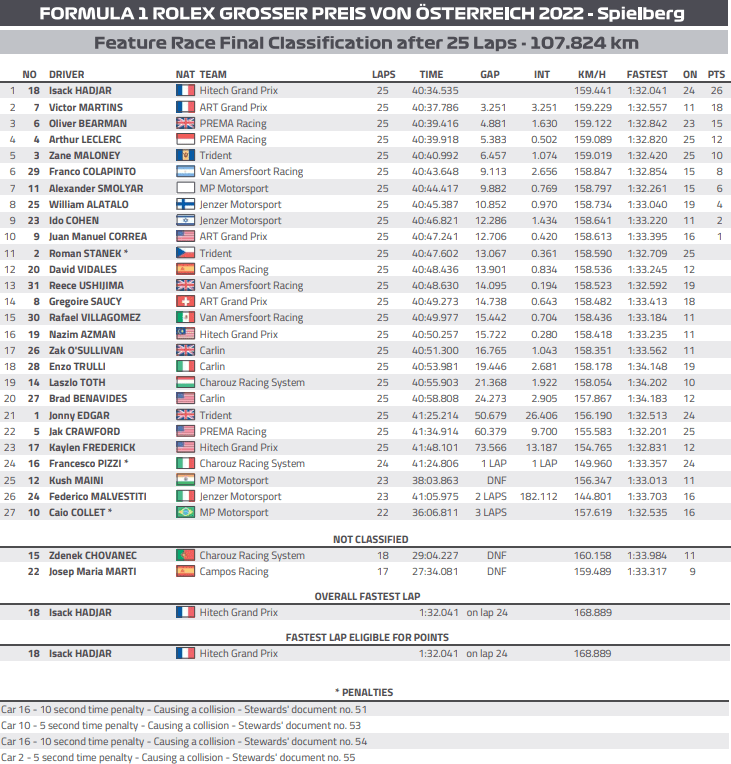