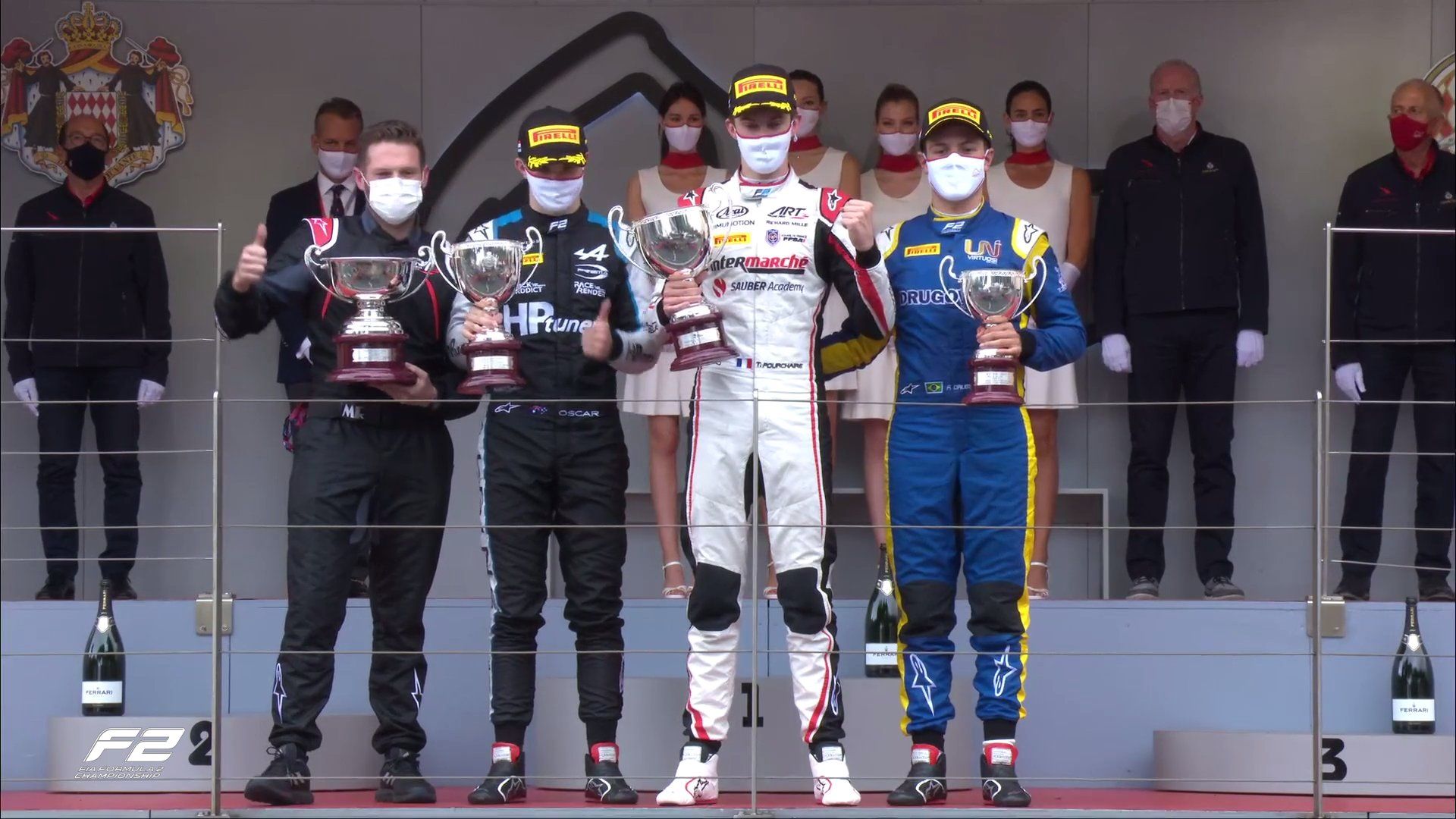 Here’s how Race 1 panned out in Monaco F2 weekend

The Race 1 Top 10 reverse grid in Race 2 at Monaco saw drama even before it started as pole-sitter Marcus Armstrong stopped on the way to the grid in his DAMS, thereby losing pole. He was forced to start from the pitlane as his Race 1 move was undone.

The track conditions was damp due to overnight rain which added to the drama as Prema’s Oscar Piastri took the lead from front-row starter Hitech GP’s Liam Lawson. In third was Carlin’s Daniel Ticktum ahead of ART’s Theo Pourchaire and Hitech GP’s Juri Vips.

Campos’ Ralph Boschung steadied in sixth from DAMS’ Roy Nissany, as UNI-Virtuosi Racing drivers sandwiched Carlin’s Jehan Daruvala after the Indian cleared Guanyu Zhou at the start, where Felipe Drugovich was eighth in the order.

Campos’ Gianluca Petecof’s F2 weekend took another step towards being a disaster after his off at Turn 1. He was bumped by one of the Trident cars, but it resulted in his second retirement, as Armstrong also had an off at Turn 1, ending his race too.

At the front, Piastri came under tremendous pressure from Lawson. The Kiwi tried a move at Turn 10 but the Australian held on by taking a shortcut. However, the Hitech GP driver did a Armstrong in the final corner and pushed through to take the race lead.

At the back, Drugovich also had an off, which dropped him outside the Top 10. There was an off for Charouz’s Guilherme Samaia at Turn 1, but he continued, as a VSC period saw UNI-Virtuosi take a gamble to pit Zhou and Drugovich for dry tyres.

The gamble didn’t work as they switched back on to the wet tyres after few laps of trying. An off for Trident’s Marino Sato at Turn 1 ended his race, while ART’s Christian Lundgaard stopped to retire after he hit the wall as Lawson continued to lead.

After waiting for multiple times, Ticktum finally got through Piastri on the exit of Turn 10 to take second, as Pourchaire started to get under pressure from Vips. It was a huge gap to Boschung behind, who had Nissany and Daruvala in the Top 10.

The Indian, though, had MP Motorsport’s Richard Verschoor just behind along with Charouz’s David Beckmann and MP Motorsport’s Lirim Zendeli. It got hasty among them as Nissany continued to chase Boschung for sixth place.

The Israeli passed Boschung at Turn 10 but went off and had to give the place back. It brought Verschoor in the game, who cleared Daruvala just a lap before. Behind Zendeli cleared Beckmann, as the German was spun off by Trident’s Bent Viscaal.

A full safety car was deployed for the incident as Nissany clubbed the wall in his pursuit of Boschung. The re-start worked well for Lawson, who held off the charge from Ticktum to win Race 2 of Monaco F2 weekend from the British driver.

Only 28 laps could be completed after the 45 minutes time rule was kicked-in. Piastri ended up third despite the charge from Vips, who cleared Pourchaire in a solid move. Boschung held on to sixth from Verschoor, who had a charging drive from outside the Top 10.

Teammate Zendeli took the final point from Daruvala, who once again lost a place on the final lap, as HWA Racelab’s Jack Aitken rounded out the Top 10 from Prema’s Robert Shwartzman, who had a late stop for the dry tyres.

UPDATE: Post-race checks saw Lawson in non-conformity with the technical regulations. As a result, he lost his F2 win and was disqualified from the event, which handed a win to Ticktum from Piastri and Vips in the Top 3.

The statement stated: “The Stewards examined data evidence. They summoned and heard the driver and team representative (Document No 43) and the FIA Technical Delegate. A defined throttle pedal progressivity map programmed in position 1 of the steering wheel throttle map rotary knob must be used during all formation lap starts and race starts until the car speed reaches 50 km/h.

“Car 07 used a different throttle map at the race start. Having considered the matter extensively, the Stewards determined that Car 07 was therefore in breach of the Technical Regulations and is therefore disqualified from the results of Race 2.” 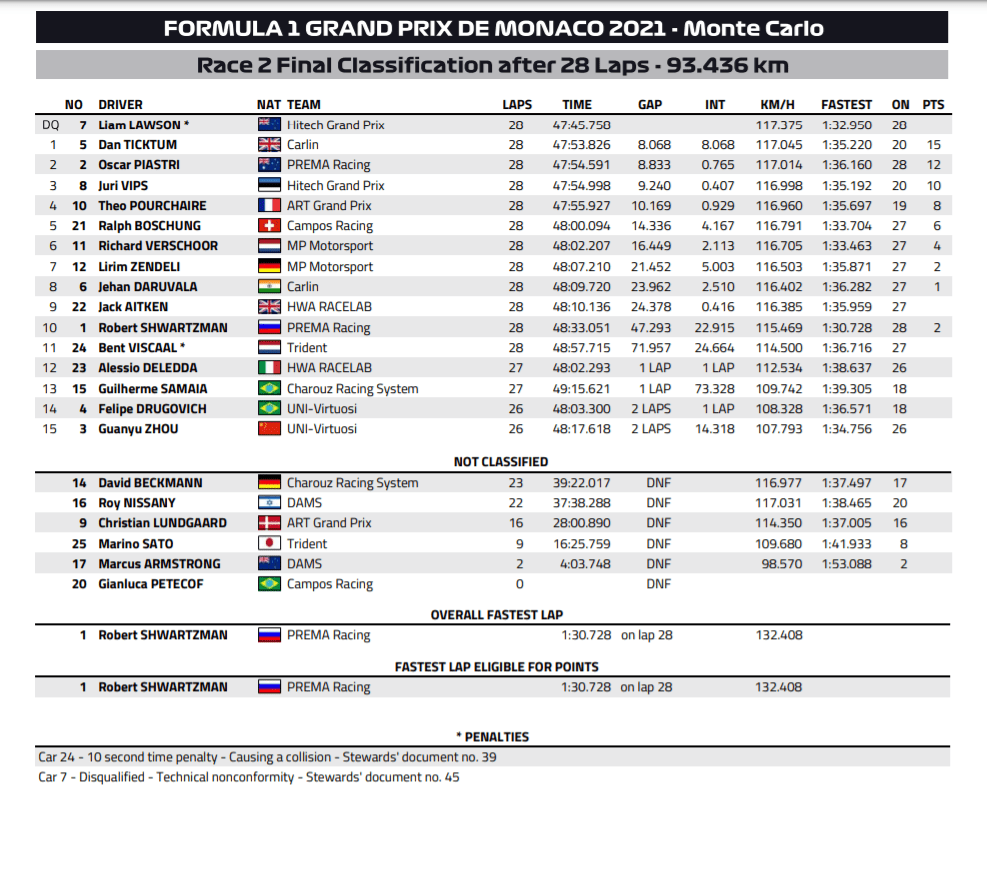 The feature F2 race in Monaco started in a somber way with pole-sitter Pouchaire leading well from Shwartzman, Piastri, Ticktum, Vips, Boschung, Nissany, Lundgaard, Drugovich, Zhou in the Top 10 – which was same order as they started the race on.

Daruvala was another to pit early and returned to the track behind Campos’ Petecof. In the fight the two touched at Turn 10, which ended the Indian’s race. The Brazilian was handed a 10s penalty for causing a collision as the stewards adjudged him guilty.

The Indian racer had a 5s penalty too for speeding in pitlane, same as Lundgaard. As Pourchaire continued to lead, the soft runners started to pit between Lap 23 to Lap 25. A slow stop for Shwartzman dropped him to sixth, while Zhou extended his stint.

Vips was handed a 5s penalty for causing a collision. The re-start saw another final corner collision, this time Ticktum went for a move on Piastri, but binned it to end a fine run in fourth. This gave a breathing space to the Australian.

With Zhou pitting late in the race, Pourchaire finally re-assumed the lead and won the Monaco feature F2 race with a comfortable lead over Piastri. The Frenchman took a semi-home victory, considering he lives not far away from the circuit.

Drugovich made the alternate strategy work to register a fine podium in third from the latter half of the Top 10, as Shwartzman recovered to fourth. Zhou also made up good number of places to be fifth despite pressure after his late stop.

He was being hounded by Boschung, but resisted the pressure, to even set the fastest lap, to extend his F2 points advantage. The Swiss driver, meanwhile, held of Lawson and Vips, as the Estonian had enough gap to cover off the 5s time penalty he had.

Nissany ended up ninth ahead of Verschoor in the Top 10 to score points, as Viscaal missed out in 11th, with Lundgaard dropping to 12th after his penalty. Beckmann and Sato were the last runners on the lead lap in the Top 14, with four others one lap down.