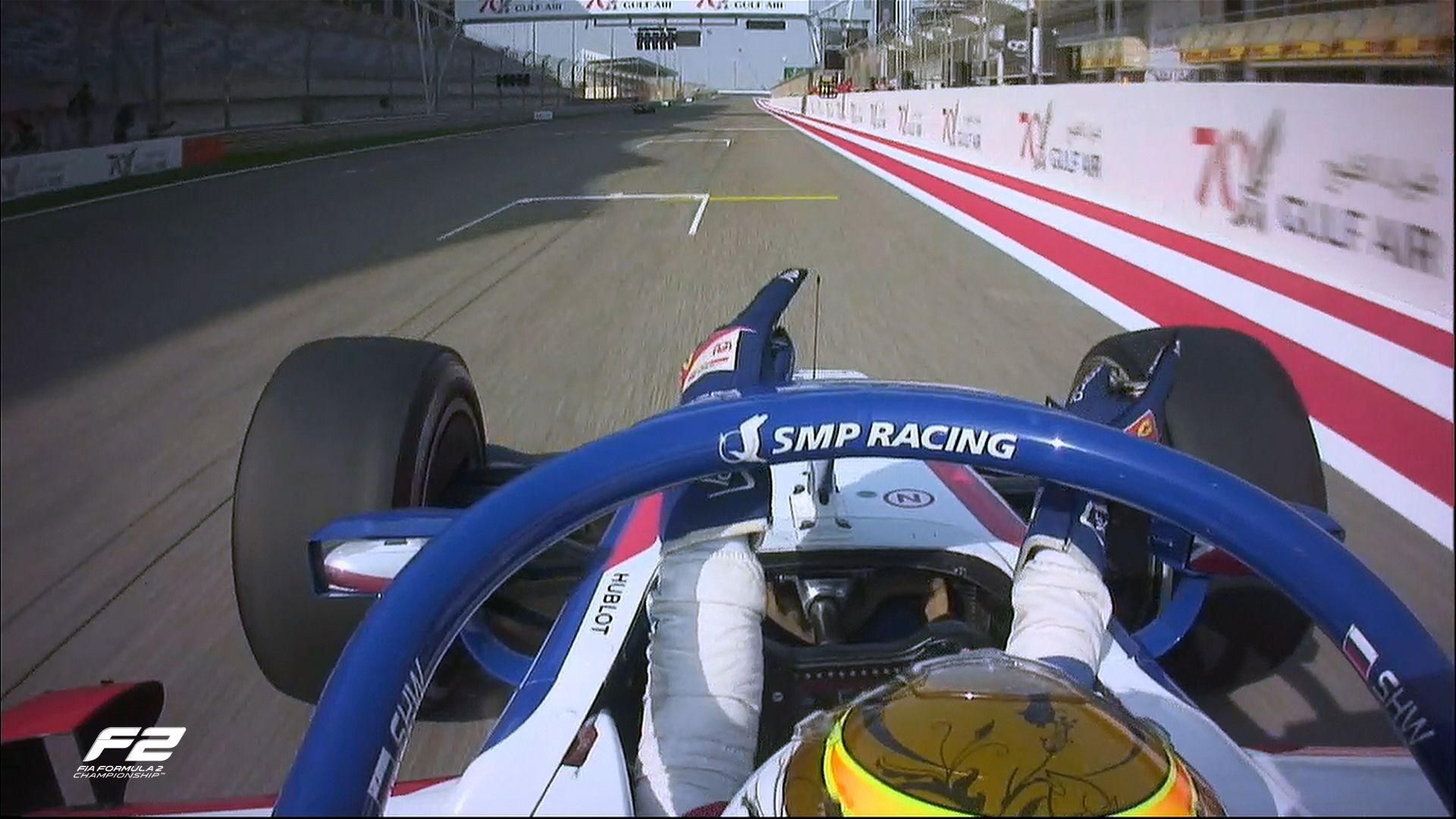 Reverse grid F2 pole-sitter Robert Shwartzman in his Prema started the sprint Bahrain race well as he led the way despite the hurry from Carlin’s Yuki Tsunoda. The Japanese, though, had a puncture after being hit by ART Grand Prix’s Marcus Armstrong.

Armstrong’s front wing made contact with the left-rear in the right-hander as Carlin’s Jehan Daruvala was fourth ahead of the battling Prema’s Mick Schumacher and Hitech GP’s Nikita Mazepin, where the Russian had a slow start after stalling on the formation lap.

The duo exchanged places for couple of laps but Mazepin eventually got the place as he even cleared Daruvala for fourth. Campos Racing’s Jack Aitken was sixth ahead of UNI-Virtuosi Racing’s Callum Ilott and Guanyu Zhou in the Top 8.

The strategy game was on with the F2 teams divided whether to stop or not. A Safety Care situation helped somewhat after HWA Racelab’s Theo Pourchaire was stopped at the side of the track when a fire extinguisher blew inside his car.

The re-start had Shwartzman hold off his F2 lead from Armstrong and Mazepin but for Daruvala it all came undone after a hit from Ilott. Going into Turn 10, the Brit tried to press through title rival Schumacher but both had a huge lock-up in the left-hander.

While Schumacher managed to evade any contact, Ilott hit the back of Daruvala, where the Indian retired immediately. The Brit stopped for a new front-wing but his race was done with a drive-through penalty for causing a collision.

Even though Schumacher continued, he lost a place to Charouz’s Pedro Piquet, as the Brazilian moved up to third after passing Armstrong, who earlier lost second to Mazepin. Behind, Zhou started to pull himself in the fight against the German for fifth.

While his teammate was unable to score but Zhou took points away from Schumacher as the German then came under pressure from ART’s Christian Lundgaard and MP Motorsport’s Felipe Drugovich in the fight for sixth position.

Lundgaard tried a look in and almost crashed which set him back in the clutches of Drugovich. The Brazilian made a move but the Dane came back on him to maintain track position. Charouz’s Louis Deletraz, meanwhile, was closing in behind.

The Swiss F2 racer stopped early on which helped him to have fresher compound for the end of the race. He cleared Drugovich, Lundgaard, Schumacher and Zhou to be fourth. A late problem for teammate Piquet allowed Deletraz to third from 16th on the grid.

The Swiss racer ended up just 1.1s behind Mazepin as he keeps himself in the F2 title hunt, while Shwartzman took the Bahrain sprint race win at ease eventually to keep Prema ahead in the teams’ championship against Hitech GP and UNI-Virtuosi Racing.

Ferrari stablemate Armstrong did well to hang on to fourth as Zhou was fifth from Lundgaard, who cleared Schumacher on the final lap. The German keeps his F2 points from Ilott with 14 points between the two, with two races in Outer Track remaining.

Drugovich, meanwhile, rounded out the points position as Trident’s Roy Nissany and HWA Racelab’s Artem Markelov rounded out the Top 10 after a late front-left tyre failure for Aitken – although it wasn’t clear if it was a puncture or contact.

Here’s F2 race for viewers in India and Brazil: https://www.youtube.com/watch?v=ah1yFXpQjXI