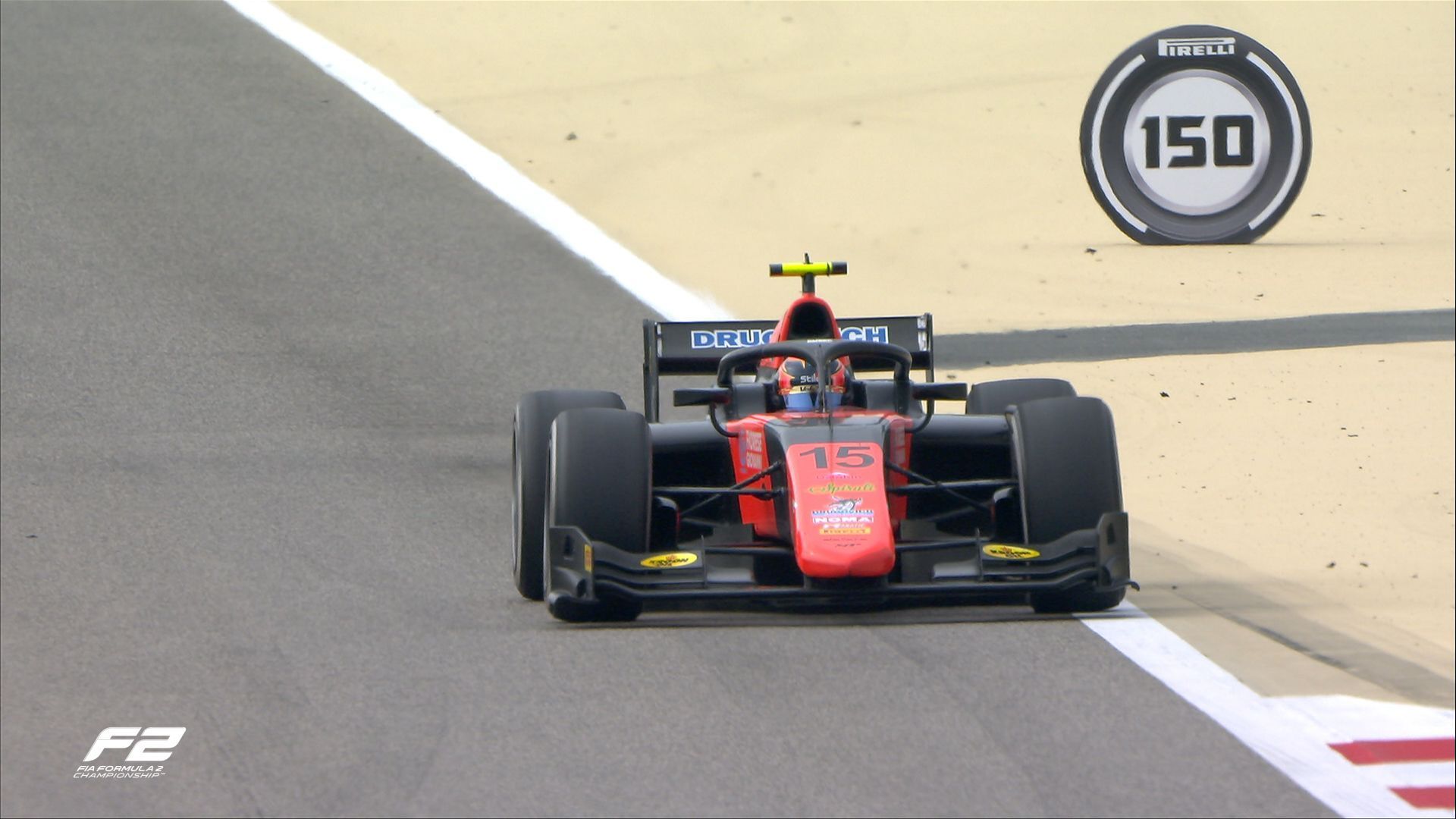 The Bahrain feature F2 race started under cloudy conditions as pole-sitter Callum Ilott in his UNI-Virtuosi Racing car lost his lead to MP Motorsport’s Felipe Drugovich as ART Grand Prix’s Marcus Armstrong was up to third at Bahrain International Circuit.

It was a storming start from Prema’s Mick Schumacher as well, who jumped to fourth, even surviving a small clip from UNI-Virtuosi Racing’s Guanyu Zhou. The Chinese F2 racer’s right-front clipped the rear-left tyre of the German.

As Drugovich continued to lead, Schumacher charged himself up to second after passing Ilott and Armstrong. The British driver’s medium tyres were not working for him which allowed the Kiwi to get by for second before the German came through.

He passed Ilott and Armstrong then to get on the tail of Drugovich. The pass on the Kiwi racer was made easier after the ART racer locked-up twice on the lap. Behind them, Alesi hung on to fifth as Daruvala dropped down the order to 10th on the medium tyres.

Ticktum, Nissany, Mazepin and Lundgaard moved up to sixth, seventh, eighth and ninth as a result. The fight for sixth saw the Brit fend off the Israeli and the Russian but to no avail with the DAMS driver struggling on the hard compound as opposed to the medium.

Mazepin was under investigation for his move on Daruvala but was cleared by the F2 stewards. Meanwhile, Schumacher assumed the F2 lead on a different strategy from Carlin’s Yuki Tsunoda as others around them stopped for the mandatory change.

The stop from Schumacher dropped him to sixth as Drugovich took over the F2 lead from Ilott, even though the British racer passed him in the pits. Daruvala ran third from Armstrong and Shwartzman but the German cleared his teammate quickly.

He made a quick work of Armstrong to be fourth. Behind the Top 6, Ticktum was seventh from Mazepin, Hitech GP’s Luca Ghiotto and DAMS’ Sean Gelael in the Top 10. While Drugovich led the way, Ilott, Daruvala and Schumacher steadied in Top 4.

Armstrong hung on to fifth but Mazepin moved himself up to sixth with Shwartzman seventh from Ticktum but not for long as Tsunoda was the driver on charge as cleared them both to be seventh – the Japanese came through from 22nd, surviving a spin too.

At the front though, Drugovich was unrelenting to register his third win of the 2020 F2 season in Bahrain’s feature race by 14.8s over Ilott as Daruvala managed to defend well from Schumacher to register his first podium in the championship.

With a second for Ilott, the Brit took some points away from Schumacher. Mazepin managed to pass Armstrong for fourth as the Russian held off just Tsunoda, who cleared the Kiwi as well, as Shwartzman in eighth took reverse grid pole.

Despite the early struggles, Ticktum managed to eke out points in ninth with Campos Racing’s Jack Aitken rounding out the Top 10 from Charouz’s Pedro Piquet. A returning Gelael did well in 13th behind Ghiotto, as Zhou ended up 14th behind.

Here’s the link to re-watch for those in India and Brazil: https://www.youtube.com/watch?v=uzjzQ0M_tNA