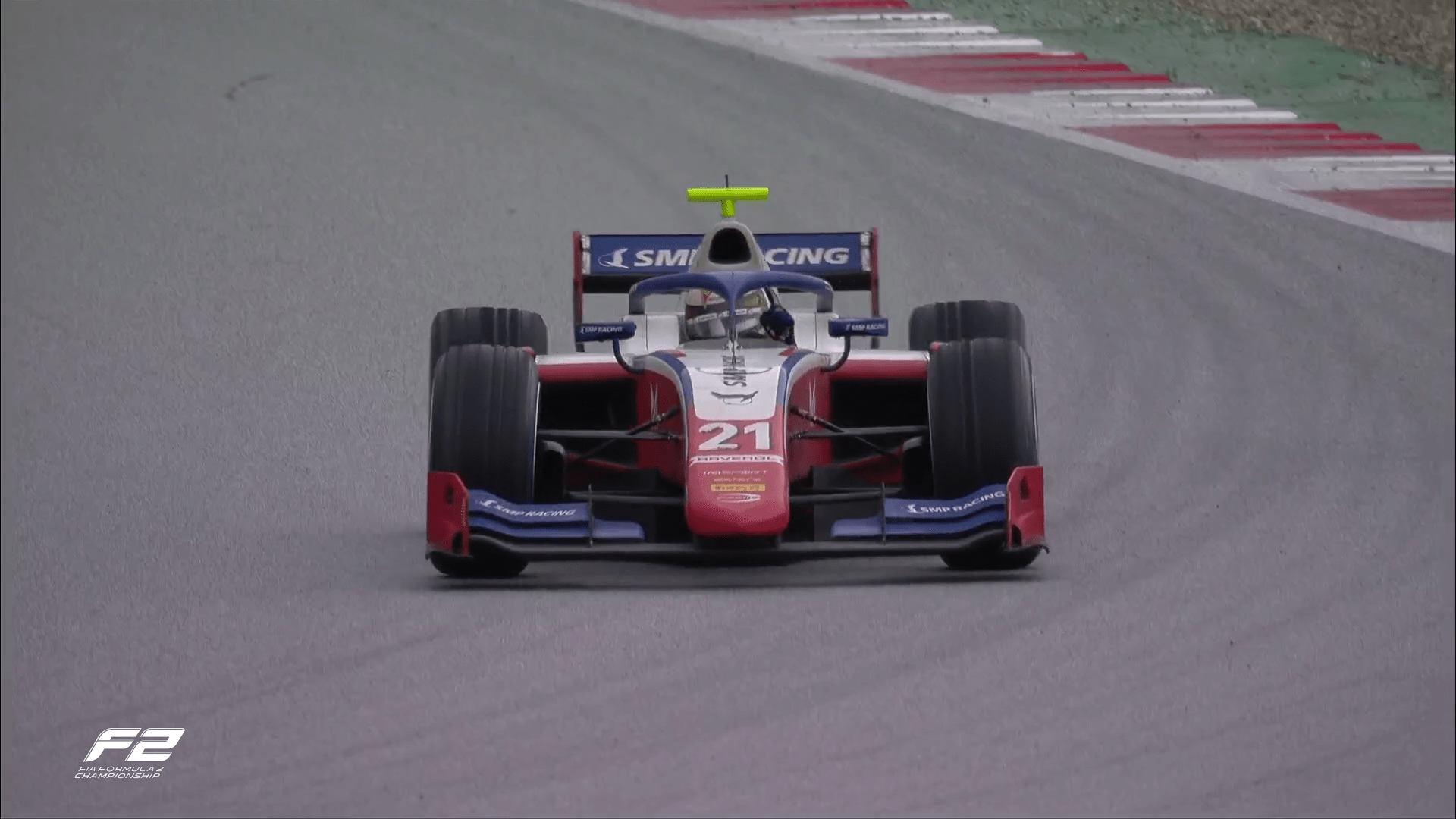 After the end of the F1 qualifying which ran under wet conditions, it was same for the F2 feature race at Red Bull Ring. Things got going under the safety car at the scheduled time but it was extended formation laps rather than actual laps.

The race control then red-flagged the session as the long wait begun for the rain to improve as it continued to flock down. It eventually started behind the safety car with laps down to 36 as after few laps behind SC, Tsunoda led the way calmly.

UNI-Virtuosi Racing’s Guanyu Zhou and Callum Ilott steadied in second and third as Hitech GP’s Luca Ghiotto had an off to drop to fifth which allowed Campos Racing’s Jack Aitken to fourth. The man on charge was ART Grand Prix’s Christian Lundgaard from eighth.

The Dane passed Carlin’s Jehan Daruvala, Prema’s Robert Shwartzman and even Ghiotto to get up to fifth, right behind the train of Ilott and Aitken. The Dane eventually got past the British-Korean racer when he dived into the pits straight.

On the charge was Shwartzman too as he got through Ghiotto with Prema’s Mick Schumacher making a place on Daruvala. The pit strategy was spread out with most changing tyres at different laps of the feature F2 race.

It started to get dicey as Carlin couldn’t get through the message across for Tsunoda to pit as his rivals Zhou and Shwartzman continued to hammer in quick times. The Japanese eventually pitted after manual call-in but lost three places, including Ilott.

He also had a slow stop which held him up. Meanwhile, the fight for the lead spiced up as Zhou started to come under pressure from Shwartzman, who made the move stick in Turn 2-3-4 sequence to take the top spot from the Chinese racer.

Tsunoda got back one place to be third from Ilott as Lundgaard got back Aitken for the second time to be fifth from Schumacher, who also passed the British-Korean racer. Behind, Armstrong was on the charge after he passed Ghiotto and Daruvala.

Meanwhile, at the front, Shwartzman led the way but Tsunoda started to come back as he passed Zhou to second. The Japanese reeled in the Russian but did not have enough legs to make the move as the Prema racer scored his first F2 victory.

Tsunoda had his first F2 podium as Zhou held on to third after fending off Schumacher by just the 0.1s on the line. Ilott finished fourth after losing to the German as Lundgaard managed to keep off teammate Armstrong to be sixth.

DAMS’ Dan Ticktum had a great run from outside the Top 10 to end up eighth as he passed Aitken to take away the F2 reverse-grid pole, with DAMS’ Sean Gelael also coming up alive to secure the final point from Ghiotto and Daruvala.

The Indian was running ninth at one stage when went off to drop back with Drugovich in 13th after his issues with hot front brakes. Hitech GP’s Nikita Mazepin was 14th from the Trident pair of Roy Nissany and Marino Sato.

It was a rainy start to F3 feature race at Red Bull Ring which was interrupted twice by safety car and was eventually called off after 12 laps, handing the win to pole-sitter Prema’s Vesti, who stayed out of trouble in the lead.

The results was taken at 11 laps and so half the points were awarded to the drivers. The brief racing allowed the Trident pair to excel as Lirim Zendelli made the most to end up second, while teammate David Beckmann rounded out the Top 3.

It was a Trident 2-3-4 with Oli Caldwell but with the result changing, it helped Prema’s Oscar Piastri to be fourth with the Brit in fifth. The same happened with Prema’s Logan Sargeant and MP Motorsport’s Richard Verschoor behind.

The Dutchman was sixth but dropped to seventh with the American taking his spot. Hitech GP’s Liam Lawson ended up eighth to take reverse-grid F3 pole as ART’s Theo Pourchaire was ninth and HWA Racelab’s Jake Hughes rounding out the Top 10.

Among the drivers retiring, it was ART’s Alexander Smolyar who crashed first as teammate Sebastian Fernandez also had a spin in treacherous conditions. Charouz’s Roman Stanek had an off while Carlin’s Clement Novalak suffered a puncture.

Race 1 results have been updated to reflect the state of play on Lap 11, instead of Lap 12 as was the case before

Here are the official results from the rain-soaked event#AustrianGP 🇦🇹 #F3 pic.twitter.com/Rwh3PuzSQN