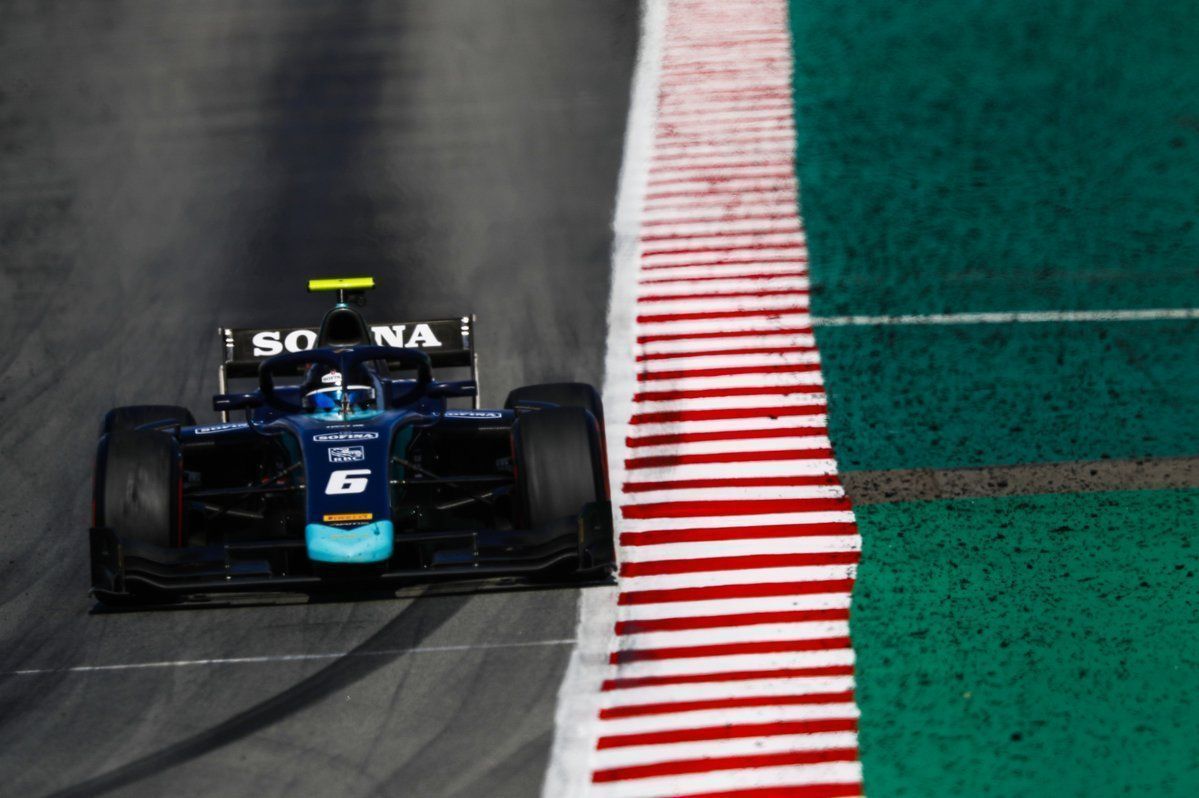 It was a frantic start to the feature F2 race at Circuit de Catalunya, Barcelona, as pole-sitter and UNI-Virtuosi Racing’s Luca Ghiotto had another bad getaway to drop down the order as his teammate Guanyu Zhou took the race lead.

The Renault junior had DAMS’ Nicholas Latifi and ART Grand Prix’s Nyck de Vries in the Top 3. The midfield saw double spins with Prema’s Mick Schumacher and Trident’s Giuliano Alesi both suffering one each at the same corner which called for a safety car.

Alesi retired immediately while Schumacher pitted to change tyres. Meanwhile, Ghitto’s day went from bad to worse when he was clouted at the side by Boccolacci, who was handed a drive-through penalty for causing the collision.

The leading pack dived in for an early stop which put BWT Arden’s Anthoine Hubert in the lead of the race with the likes of Trident’s Ralph Boschung, MP Motorsport’s Jordan King and Sauber Junior Team by Charouz’s Juan Manuel Correra staying out too.

The fight through remained between Zhou and Latifi for the win despite the two stopping early. De Vries was in the battle too along with Campos Racing’s Jack Aitken as the leading pack caught up with the drivers ahead and passed them at ease.

Even before they got into the Top 2 positions, Latifi made the move on Zhou to take the lead of the race as Aitken passed de Vries to slot behind Zhou. Despite all the early troubles, Ghiotto managed to climb his way up to Top 5.

The Italian cleared Sauber Junior Team by Charouz’s Callum Ilott, the last of the early drivers to pit. The rest of the pack was led by Hubert in seventh with King in eighth ahead of Prema’s Sean Gelael and Boschung in the Top 10.

While the fight continued at the back, Williams reserve Latifi scored his third win of the 2019 F2 season in Barcelona as Aitken managed to pass Zhou for his third consecutive podium finish as Zhou completed the podium positions.

It is the Chinese racer’s first podium finish in F2. His teammate wasn’t far off as Ghiotto fought his way back up to fourth after passing de Vries with Hubert ending up sixth ahead of King after the two managed to clear Ilott on the final lap.

The Ferrari junior though has reverse-grid pole for Sunday’s sprint race. The Top 10 was rounded out by Gelael and Boschung – the latter scoring his first points in F2. Carlin’s Nobuharu Matsushita finished 11th ahead of teammate Louis Deletraz.

Behind them was BWT Arden’s Tatiana Calderon, who climbed up from the back of the grid to 13th with Boccolacci in 14th after serving his penalty. Meanwhile, Schumacher looked good for points at one stage but a late tangle with Correa forced him to another pit stop.

He finished 15th with MP Motorsport’s Mahaveer Raghunathan in 16th on the lead lap, while ART’s Nikita Mazepin and DAMS’ Sergio Sette Camara were classified 17th and 18th after issues for the Russian and multiple penalties for the Brazilian.