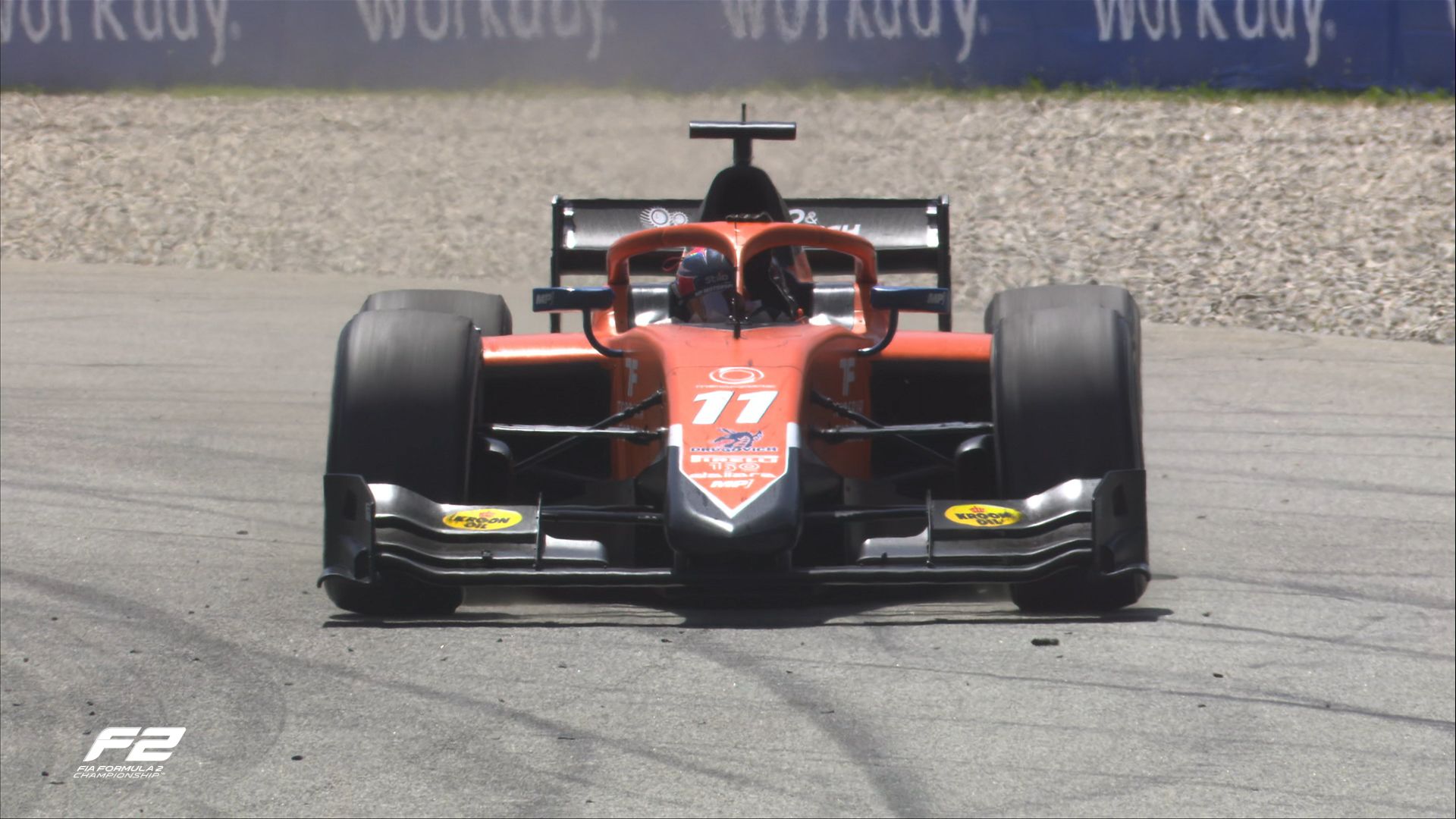 Felipe Drugovich came through the field and used his strategy perfectly to win feature FIA F2 race at Barcelona, with Victor Martins doing so in F3.

The race started to settle in but Iwasa kept the pressure on Daruvala due to the tyre difference. It seemed like they made contact but replays showed that the Indian’s engine cut off in the chicane and as he slowed, the Japanese driver was caught out.

He clipped his rear and forced to pit. The race was neutralised with the safety car out as Doohan continued to lead the way. Just as the safety car period ended, Vips dived into the pits along with others. Others did so lap after lap but Drugovich went longer.

The Brazilian stretched his soft tyre stint to 17 laps and despite a slow stop, he came out right behind Vesti in net third after running seventh on Lap 1. He wasted no time to pass the Danish driver for net second while they both passed Prema’s Dennis Hauger.

The Norwegian had a gravel moment earlier in the race too. As Drugoivich started to make inroads, the stewards noted a pitlane infringement which was to be investigated after the race along with ART pair of Vesti and Pourchaire.

With the pit stops done, Doohan was back in the lead but Drugovich was right at the back of him with Vesti, Sargeant in the Top 4. Campos’ Olli Caldwell was a surprise fifth even after his pit stop with Pourchaire sixth from Lawson.

Trident’s Calan Williams was in points too in eighth from Hughes and MP Motorsport’s Clement Novalak in the Top 10. While Drugovich led the way, in the latter half there were several positions changes due to the alternate strategy used by them.

The likes of MP Motorsport’s Clement Novalak, Charouz’s Enzo Fittipaldi and DAMS’ Roy Nissany made the most of their strategy. In the end, Drugovich did enough to comfortably win the feature F2 race again at Barcelona but he will hope for no penalty.

Doohan and Vesti secured their first podium finishes in second and third as Sargeant had another good finish in fourth from Novalak who came through the field in the dying stages. It was same for Fittipaldi in sixth with Armstrong doing the same in seventh.

Pourchaire was eighth from Lawson with Nissany rounding out the Top 10.

Off the back of achieving his maiden F3 pole position in Friday’s Qualifying, Stanek was joined on the front row by Martins. The Trident driver got a decent start off the line, but he had no defence for Martins. Tactically, the ART driver tucked into the pole-sitter’s slipstream, fully committing to an early move to swoop around the outside of Turn 1 for the lead.

A solid getaway allowed Hadjar to hop into P3, as Leclerc was swallowed up at the start dropping down the order from P5. The PREMA driver suddenly found himself going side-by-side with Sprint Race winner David Vidales for ninth.

Out front, Martins looked to be untroubled, beginning to pull over seven-tenths clear of Stanek after the opening lap. In the fight for second, Hadjar was putting Stanek under pressure, with Smolyar keeping close to the pair.

However, Martins’ advantage was soon undone on Lap 4 when the Safety Car was brought out to recover Van Amersfoort Racing’s Rafael Villagómez from the wall at Turn 4. With the Safety Car heading back into the pits four laps later, Martins didn’t hesitate to put his foot to the floor early into the final chicane, nailing an excellent restart to pull a sizeable gap from Stanek behind.

The restart didn’t go as well for Frederick, as Crawford dived down the inside of his fellow American for sixth and Collet soon followed him through. Racing was brought to a halt once again on Lap 11 after Carlin’s Brad Benavides discovered the wall at Turn 2. In a near identical restart, Martins got things back underway, pulling away from Stanek and Hadjar.

In the battle for ninth, Leclerc and Vidales banged wheels, sending the pair off track. While the PREMA was able to recover, the Campos suffered damage to his right rear tyre and was sent tumbling down the order, promoting Colapinto up to ninth and Correa to 10th.

Determined to fight his way back into the points, Leclerc began hunting down Saucy ahead, sticking closely to his side through the first series of corners to climb back into 11th. However, with a five-second time penalty hanging over him for causing a collision with Vidales, he began putting the pressure on Correa ahead.

Running over the grass, an unconventional move from Leclerc saw him re-join the track ahead of Correa, before slowing down significantly at the final chicane, allowing the ART driver back through and giving Saucy an opportunity to have a look.

As the final laps drew to a close, Stanek was once again on the defensive, keeping an eye on his wing mirrors for Hadjar behind. Having steadily climbed his way into the points, Colapinto’s late charge from P12 saw him overtake Frederick for eighth and challenge Collet all the way to the chequered flag. However, nobody could come close to Martins, who crossed the finish line 2.4s clear of Stanek, with the Hitech of Hadjar rounding out the podium.