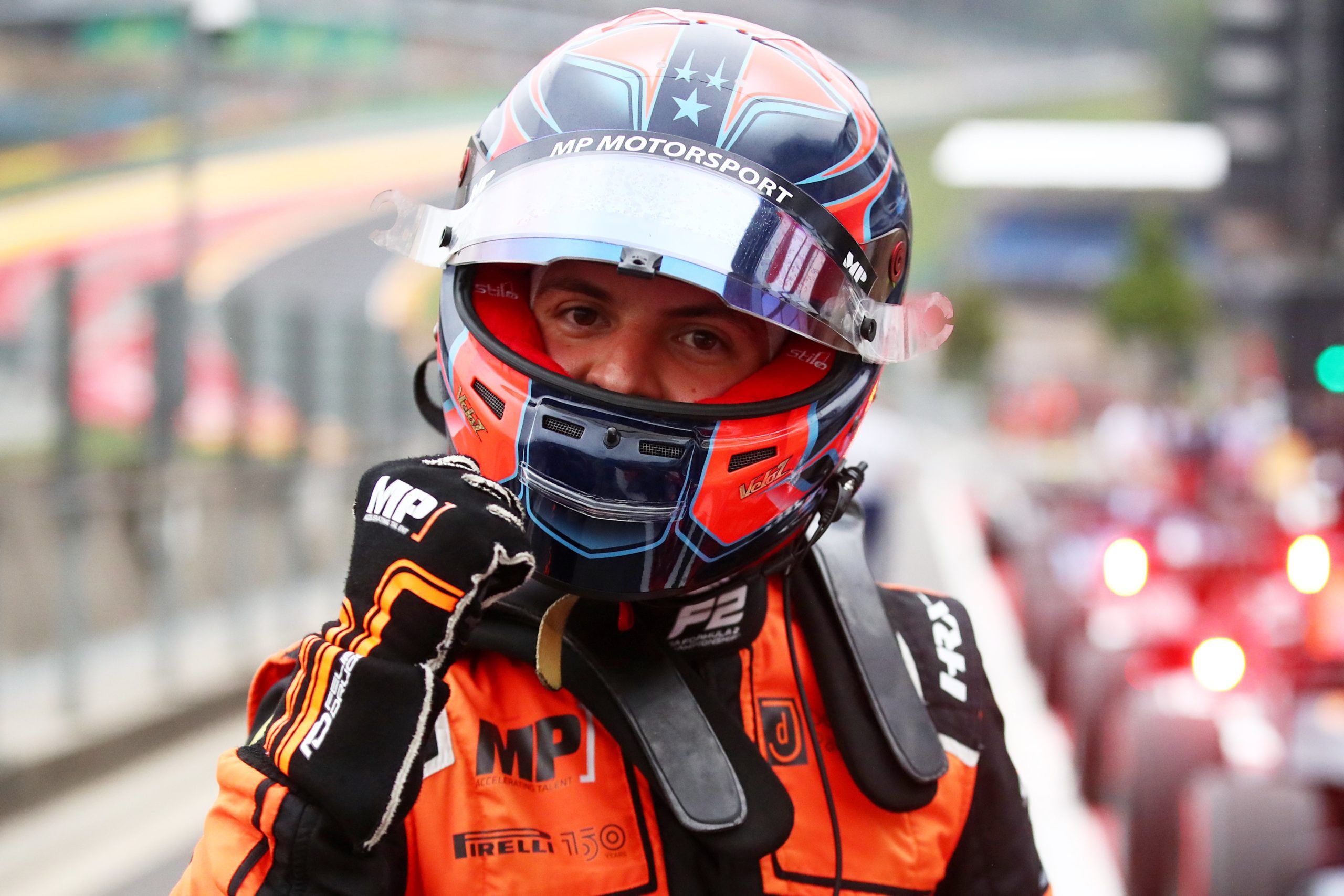 Felipe Drugovich took feature F2 race pole at Spa-Francorchamps from Enzo Fittipaldi, as Caio Collet had it in F3.

The F2 qualifying at Spa-Francorchamps started under greasy conditions but the drivers opted for dry tyres as Virtuosi Racing’s Jack Doohan had a spin early on. Hitech GP’s Juri Vips too had one which brought out the red flag after he stopped on the circuit.

After a brief stoppage, things go going as the lap times continued to improve. After the first run was done, MP Motorsport’s Felipe Drugovich led the way with a 1m59.990s as Hitech GP’s Marcus Armstrong was second and Prema’s Dennis Hauger third.

On his return to F2, Campos’ Ralph Boschung slotted in fourth from Carlin’s Logan Sargeant. The second run saw multiple changes in the order where multiple but Drugovich stepped on the gas with a 1m58.232s lap to take pole for feature race.

A late push from Charouz’s Enzo Fittipaldi saw him end up second with Carlin’s Sargeant also moving up to third along with Virtuosi’s Doohan and VAR’s David Beckmann in the Top 5. This pushed Carlin’s Liam Lawson to sixth with Trident’s Richard Verschoor in seventh.

ART’s Theo Pourchaire dropped to eighth with Prema’s Jehan Daruvala in ninth from reverse grid pole-sitter Boschung, as the other Prema of Dennis Hauger was only 11th.

#F2 #BelgianGP Qualifying results. The top 10 will be reversed as the starting grid for tomorrow's Sprint Race. #MsportXtra pic.twitter.com/HbB3CG9enE

Caio Collet put his foot to the floor to storm his way to his first Formula 3 pole position, mastering the wet to drying conditions in Spa-Francorchamps to become the seventh different driver to take pole in as many rounds. There was no shortage of contenders in the fight for P1 as last-minute improvements mixed up the order but it was the MP Motorsport driver who reigned supreme, over two tenths clear of Zane Maloney.

Francesco Pizzi secured his best Qualifying performance of the season by a stretch in third, whilst Oliver Goethe put Campos Racing right in the hunt for points in fourth ahead of Roman Stanek. Meanwhile, it was a difficult session for the top three Championship contenders, with third-placed Arthur Leclerc leading the way in P20, while Isack Hadjar and Victor Martins will have each other for company on the 12th row of the grid.

Downpours during the break between Practice and Qualifying forced the whole field to bolt on the wet weather Pirelli tyres and given the conditions, it was no surprise that the track was immediately full of action.

Despite his lack of previous experience around the Belgian circuit, Oliver Bearman immediately got up to speed to set the early benchmark with a 2:22.931, 0.159s ahead of his teammate Leclerc. However, the conditions saw several drivers dance on the limit with Maloney going deep into the final chicane.

The session soon ground to a halt with 19 minutes on the clock, as Jak Crawford found himself facing the wrong way. In his attempt to spin his PREMA car around, the American driver got caught out by the gravel trap and was forced into a frustratingly early end to his running.

Sitting tight in the pit lane, the big question on everyone’s minds was – is now the time for slicks? A drying line had begun to form along the 7.004km track and nine drivers, including Championship leader Isack Hadjar, bolted on the medium compound when the lights went green once more.

Tip-toeing their way around, the conditions were less than ideal, as William Alatalo sent up a flurry of spray out of the Jenzer’s rear wheels. Nevertheless, the times swiftly began to tumble and despite his fears that Hitech Grand Prix made the jump to the dry tyres too early Hadjar stormed to the top of the timing sheets, a whopping 4.2 seconds faster than Bearman’s early effort.

There was no time for the field to rest with less than 10 minutes remaining and the battle for pole was anyone’s game – Martins, Collet, Alatalo and Bearman traded turns in the P1 spot, before Alexander Smolyar snatched provisional pole with a 2:15.121, over three tenths clear of Stanek. Not content with P2, the Trident driver sent it to leapfrog Smolyar by over a second.

Improvements were never far away, and the order continued to chop and change as the session approached the final five minutes. Out front, Stanek became the first driver to break into the 2:12 barrier and showed no signs of slowing down, but with an ever-drying track, it would be a fight to be the last driver to cross the line that would decide who would start on the front row.

Even the appearance of the chequered flag didn’t mean that the order was final. Maloney leaped half a second clear of his teammate but there was nothing he could do to stop Collet’s final effort of 2:11.289, which sent the Brazilian straight into P1 to seal back-to-back poles for his MP team, and forced the Bajan driver to settle for second.

Pizzi capitalised on the best conditions of the session to catapult himself into P3 at the very end of the session, as Goethe moved up to fourth ahead of Stanek. All three Tridents secured their spots in the top six, as Jonny Edgar outqualified Budapest pole man Smolyar.

Having led the session early on, Bearman could only manage eighth in the drying conditions, ahead of Franco Colapinto and Brad Benavides, who secured his best Qualifying result of his 2022 campaign in 10th for Carlin.

#F3 #BelgianGP Qualifying results that started wet, had a red flag and ended pretty dry. The top 12 will be reversed as the startinggrid for tomorrow's Sprint Race. #MsportXtra pic.twitter.com/vwTJ6Q4IRN