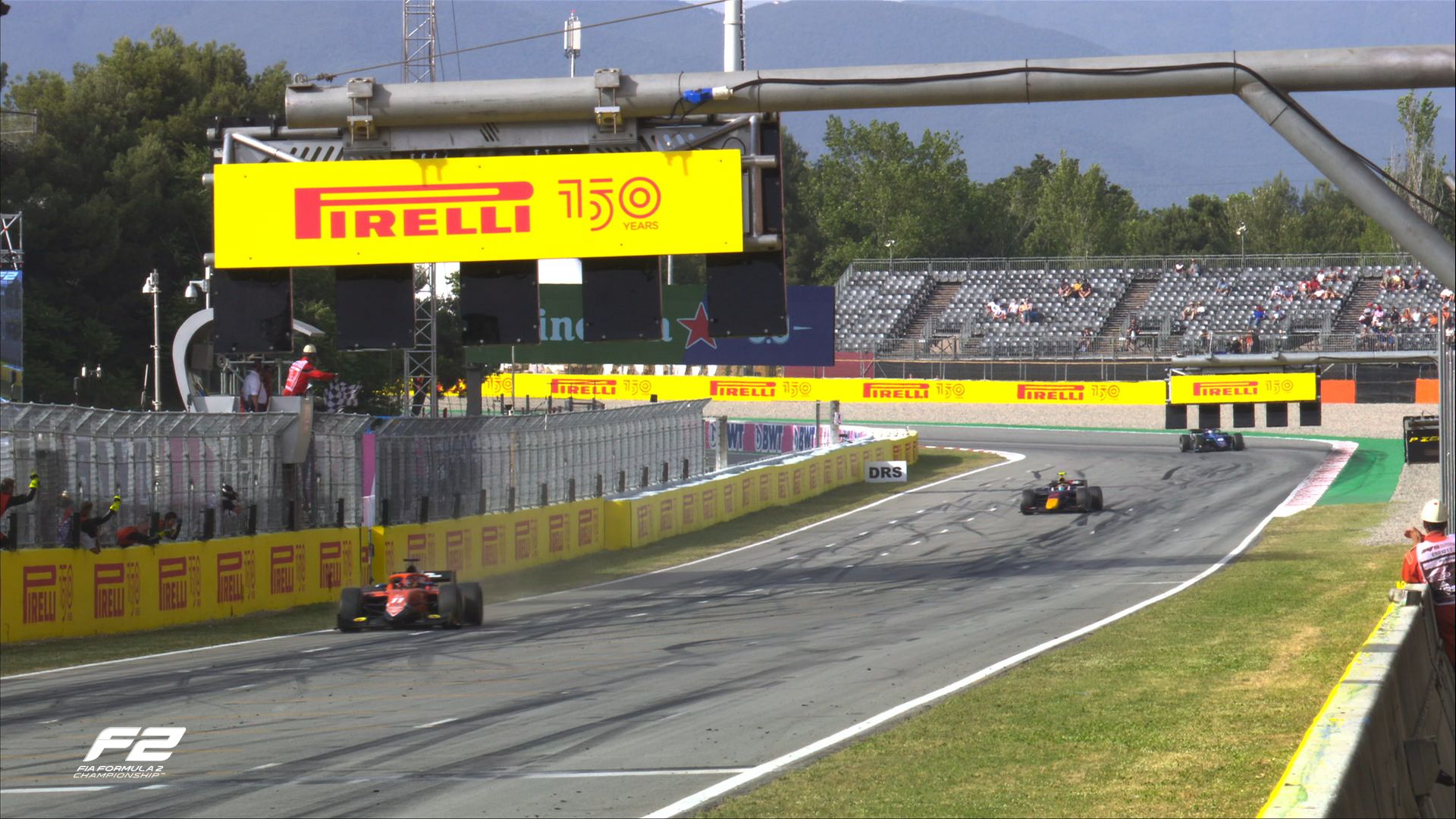 Felipe Drugovich controlled the sprint F2 race at Barcelona at ease as David Vidales fended off opposition to win in F3.

Even before the start of the sprint F2 race at Barcelona, reverse grid pole-sitter Calan Williams stalled his Trident on the formation lap. He was forced to start from the pitlane as Van Amersfoort Racing’s Jake Hughes was the de-facto leader.

But he did not have a great start as MP Motorsport’s Felipe Drugovich took the lead in a frantic start from DAMS’ Ayumu Iwasa with Carlin’s Logan Sargeant in third. ART’s Theo Pourchaire was fourth with Hughes slotting in fifth place.

ART’s Frederik Vesti was sixth from Prema’s Jehan Daruvala, Hitech GP’s Juri Vips, Virtuosi Racing’s Jack Doohan and Hitech GP’s Marcus Armstrong in the Top 10. There was a 10s stop and go penalty for VAR’s Amaury Cordeel for being out of position.

While Drugovich led the way, Daruvala was on the charge after he passed both Vesti and Pourchaire in the opening few laps but he came under pressure from Vips who charged for a move. In his chase, he lost control in the right-hander and spun onto the gravel.

The safety car was called out but before that, Sargeant also tried a move on Iwasa for second but couldn’t make it stick. The re-start settled things with Drugovich leading from Iwasa, Sargeant, Hughes, Daruvala, Pourchaire, Doohan and Vesti in points.

With the Top 3 settled, Daruvala made the first move on Hughes to be fourth as Pourchaire followed him on the next lap to be fifth. Doohan joined the party along with Vesti in the chase of Hughes who was struggling with the tyres.

The Brit dropped outside the Top 10 with Doohan, Vesti and Charouz’s Enzo Fittipaldi moving into the Top 8. The Brazilian had Carlin’s Liam Lawson and Hitech GP’s Marcus Armstrong just behind him in the chase for the final point.

Up front, Drugovich controlled at ease to win the sprint F2 race from Iwasa and Sargeant with Daruvala ending up fourth from Pourchaire, Doohan, Vesti and Fittipaldi in the points where the Brazilian managed to hold off Lawson and Armstrong.

A strong getaway for the front row at lights out saw reverse-grid pole-sitter Vidales retain his lead ahead of Correa, despite Crawford’s attempt to go three wide into Turn 1. The American driver eventually had to bail out of the move and remained in third.

There was an abundance of action behind them, as Collet sought to get past Frederick for fourth and Smolyar and Oliver Bearman duelled over P6. As Smolyar dived down the inside of Turn 10, the pair went side-on, and the PREMA driver paid back the move by utilising the slipstream into Turn 1 on the following lap.

On his return to F3, Charouz Racing System’s Lirim Zendeli had his hands full batting both Ido Cohen and Brad Benavides. Making the move stick, Cohen slotted his Jenzer Motorsport car up into 22nd.

Back out in front, Vidales was slowly but surely pulling a gap from Correa behind, who was soon dispatched by Crawford along the DRS straight. The PREMA driver then set his sights on clawing in the Campos out front. In the other two PREMAs, Leclerc jumped ahead of Bearman, who was swiftly overtaken by Stanek for P8.

Disaster soon stuck for Championship leader Victor Martins on Lap 7. The ART driver slowed down on track and was forced to trundle back to pits, retiring from the race. Franco Colapinto was another retiree, after the engine cover on his Van Amersfoort Racing car broke off.

Lap 11 saw Crawford catching the heels of Vidales in the fight for the lead, the pair nip-and-tuck into Turn 1. The Spaniard went hard of the defence, as PREMA driver jolted across the sausage kerbs, allowing Vidales to begin to pull a gap once more.

Making moves up the order, Collet went late on the breaks into Turn 1 to get past Frederick for P4 and his teammate Smolyar soon followed him through. In the fight for the final points, Hadjar dove past both Ushijima and Bearman to get up into ninth.

As the race entered its closing stages, Correa’s defence of third came to an end as Collet capitalised on the slipstream meanwhile Leclerc jumped up into sixth ahead of Frederick. The train that had formed behind the Ecuadorian-American driver soon came into play as Smolyar went wheel-to-wheel with Correa. The move failed to pay off as he dropped behind Leclerc, who found his own way past the ART and into fourth.

However, nobody could come close to Vidales as he crossed the line to take his first victory in the category on home soil, 1.2 seconds clear of Crawford in second. Collet rounded out the podium in third, ahead of Leclerc, Correa, and Smolyar. Frederick finished seventh for Hitech, ahead of Stanek in eighth. Ushijima was ninth for VAR, overtaking Hadjar for a crucial two points.