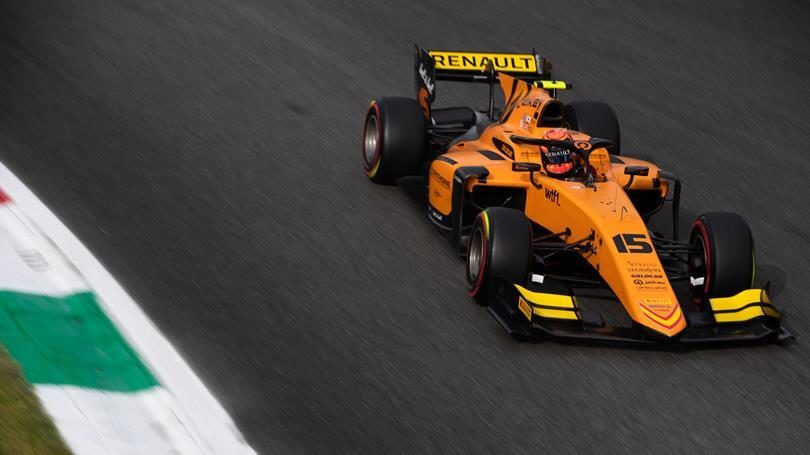 Trident’s Giuliano Alesi was third ahead of Sauber Junior Team by Charouz’s Callum Ilott as DAMS’ Sergio Sette Camara was fifth from UNI-Virtuosi Racing’s Luca Ghiotto despite a minor touch.

At the front, King went past Aitken in a wheel-to-wheel fight for few corners, which saw the Campos driver to even go off before re-joining. While the lead change happened, there was an incident behind.

De Vries was trying a move on Camara after passing Ghiotto early on but the the Italian out-braked himself at Turn 1 and touched the left right of de Vries, as he went off and touched Camara, who was forced to retire.

Ghiotto lost his front wing and was handed a five-second penalty for causing a collision. De Vries, meanwhile, continued as the Virtual Safety Car was deployed. The re-start saw bonanza for Aitken as he passed King.

However, King came back on Aitken, only to lose out again as the MP Motorsport driver then lost to Ilott too. King complained of Aitken weaving too much, which alerted the stewards to show him a black and white flag.

Behind, de Vries moved up to fourth with Matsushita and UNI-Virtuosi Racing’s Guanyu Zhou coming with him, as Alesi dropped down to eighth with even Prema’s Mick Schumacher passing him.

The final lap got interesting with Aitken holding on to win the Monza sprint race, his third win of the 2019 F2 season. Ilott lost second at Turn 1 when he out-braked himself at Turn 1 and nearly clouted the back of Aitken.

It was a repeat of what happened to de Vries few laps before, while the Dutchman was able to continue on, the British racer had a puncture and pitted at the end of the lap, to be still classified 12th.

It helped King to finish second with Matsushita ending up third on the road but a penalty dropped him to fifth as de Vries jumped to third and Zhou recovering well from 17th up to fourth.

Schumacher returned to points in sixth with Alesi and Carlin’s Louis Deletraz rounding the points position as ART’s Nikita Mazepin missed out in ninth with F2 challenger, DAMS’ Nicholas Latifi only 10th.