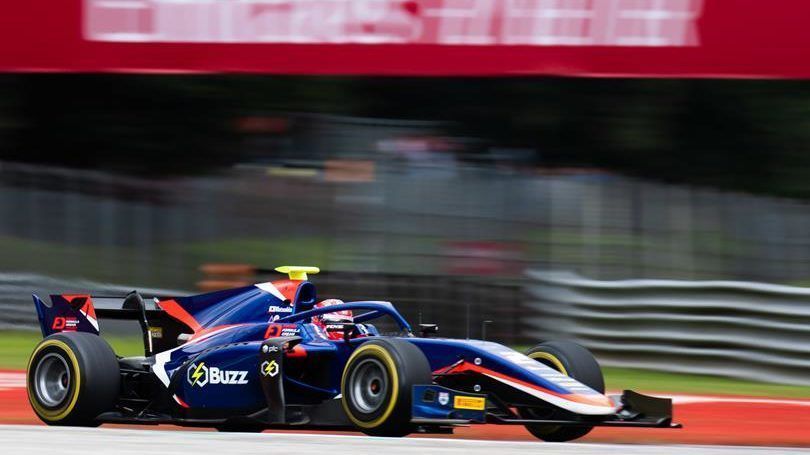 The F2 racing action resumed at Monza in the feature race with pole-sitter and Sauber Junior Team by Charouz’s Callum Ilott holding off UNI-Virtuosi Racing’s Guanyu Zhou and Carlin’s Nobuharu Matsuhita in the Top 3.

The DAMS pair of Sergio Sette Camara and Nicholas Latifi were together in fourth and fifth as MP Motorsport’s Jordan King slotted in sixth ahead of UNI-Virtuosi Racing’s Luca Ghiotto.

The Top 10 then was rounded out by Carlin’s Louis Deletraz, Campos Racing’s Jack Aitken and Prema’s Mick Schumacher. An off for Zhou at Turn 1 dropped him to fifth with Ilott and Matsushita ahead.

At the same time Deletraz retired along with ART Grand Prix’s Nikita Mazepin. Up ahead, Matsushita wasted no time to pass Ilott for the lead as Ghiotto went past his teammate Zhou for fifth.

A stop for BWT Arden’s Tatiana Calderon had many pitting apart from Ghiotto, Schumacher, King and Trident’s Giuliano Alesi, with the UNI-Virtuosi Racing driver taking over the lead, which he held for long.

There was a collision between Latifi and Zhou when fighting for position as the Canadian touched the right-rear of the Chinese racer to cause a puncture. Both pitted to change for front wing and tyres respectively.

The investigation will take place after the race. At the same time, Schumacher lost drive and dropped to fifth for few laps before eventually pitting to retire as the alternative strategy drivers started to pit.

Matsushita was back in the led from Ilott as ART’s Nyck de Vries made his way up to third ahead of Camara and Ghiotto – the Italian retaining fifth place despite being on the alternate strategy.

King slotted in sixth after his stop as Prema’s Sean Gelael was up to seventh, Alesi in eighth, Aitken ninth and MP Motorsport’s Mahaveer Raghunathan rounding out the Top 10.

As Matsushita continued to lead, Ilott came under pressure from de Vries with the Dutchman passing him for second as the British racer then lost out to Ghiotto too, who passed Camara before that.

Alesi also made up a place on Gelael to be seventh, with Aitken picking him off to be eighth. Meanwhile, at the front, Matsushita eased in to score the win in the Monza feature race – his second F2 win of 2019.

Behind him, Ghiotto was the man on charge as he passed de Vries as well to finish second with F2 points leader de Vries rounding the podium from Camara, who took fourth from Ilott on the final lap.

But the Brazilian’s five-second penalty put him in fifth again behind Ilott. The rest of the Top 10 had King in sixth, Alesi seventh, Aitkein eighth, Gelael ninth and Raghunathan 10th – the final driver on the lead up.

It was the best result for Alesi, while Raghunathan scored his first point in F2. Mazepin finished a lap down in 11th with Campos’ Marino Sato 12th, Latifi 13th – the last driver to be a classified finisher.