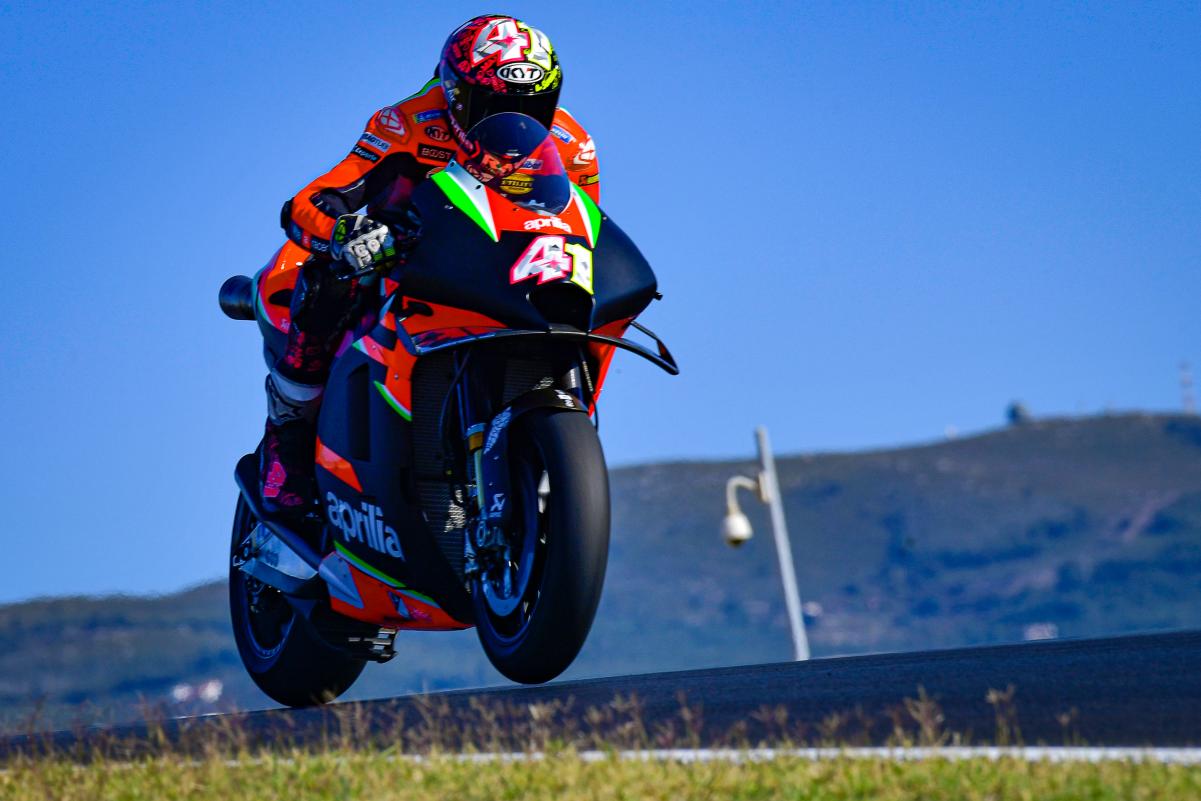 Aleix Espargaro was fastest on Day 1 of Portimao test at the newly laid tarmac as several MotoGP riders ventured on road-going superbikes.

It was a mixed run on Day 1 of the Portimao test at the Algarve circuit, which has seen a freshly re-laid tarmac, as they gear-up for not only the two-wheel championship’s race in November but also the F1 grand prix event later in the month.

As per the rule, only MotoGP test riders were allowed to run the current bike, although Aprilia used it as a test day, which allowed Esparagro to ride the RS-GP along with Bradley Smith, who will now head to Le Mans for this weekend’s French GP.

Test rider Lorenzo Savadori will ride the RS-GP on Thursday. Apart from them, Honda had Stefan Bradl on main non-liveried bike, with Jorge Lorenzo back in action for Yamaha, Dani Pedrosa with KTM, Sylvain Guintoli with Suzuki and Michele Pirro with Ducati.

They all will continue to ride on Thursday but most of the MotoGP pack will leave for Le Mans. Interestingly, everyone was present apart from Petronas SRT’s Fabio Quartararo, LCR’s Cal Crutchlow and Tech 3’s Iker Lecuona for the first day of test action.

Majority did not have a transponder on their machines too as Aprilia’s Espargaro headed the way with a 1m40.170s ahead of teammate Smith (1m14.122s) and Ducati’s Pirro (1m41.654s) in the Top 3 – although times matter little for a test like this.

While most did not have the transponder as mentioned above, but some did have it on their respective superbikes, like Yamaha’s Vinales, who set a 1m43.699s on the R1, while Oliveira did a 1m44.700s and Binder clocked a 1m44.820s.

🎢It was a fun day for @andreadovizioso and @petrux9 at @AIAPortimao today as they both got a first taste of the "roller-coaster" aboard the @ducatimotor Superleggera V4! 🤩 We can't wait to race there for the 2020 @motogp finale in November! #ForzaDucati #PortimaoTest pic.twitter.com/Zng3ajrAkz

Getting to know the wild Portimao circuit🔥@MotoGP riders took to the track to familiarise themselves on some road bikes and from what we hear, they're extremely excited to get racing there!#PortimaoTest 🇵🇹 pic.twitter.com/81n9UIyjts

Here’s the last from MotoGP regarding the test