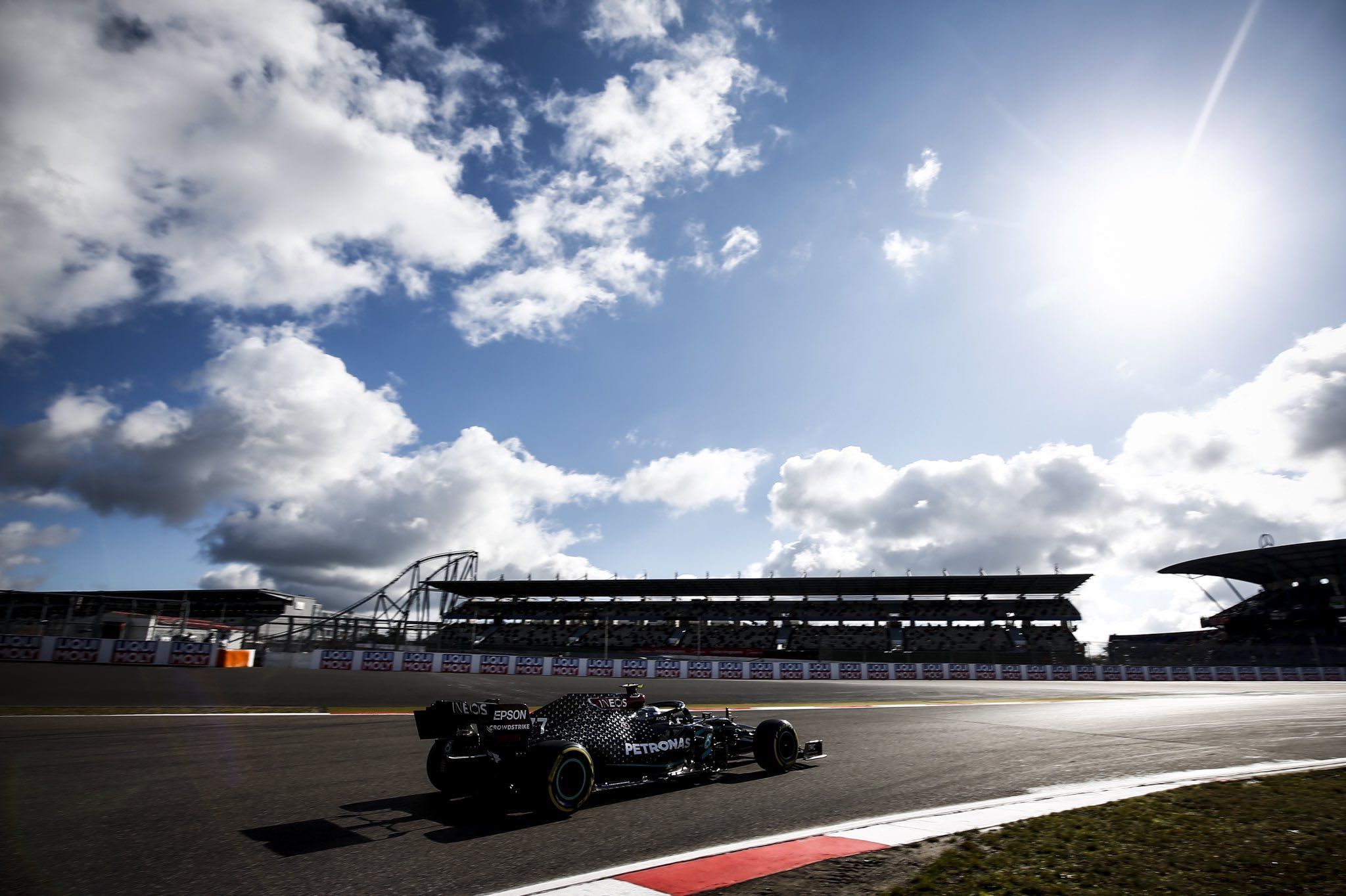 After the Friday washout, there was track action on Saturday morning in F1 Eifel GP with the FP3 session in a sunny Nurburging. The teams did not waste any time and got into action straight with just an hour to be ready for qualifying and the race.

It wasn’t a clean run as multiple drivers had their lap times deleted due to the excursions at Turn 4 as the session also saw a spin for Ferrari’s Sebastian Vettel in the final corner and a slide for Williams’ George Russell on the track after both lost their rear.

Teammate Nicholas Latifi also had spin at the final corner but managed to carry on, although it was enough to ruin Mercedes’ Lewis Hamilton’s lap. The Brit did not enjoy the session but he improved to second with a 1m26.361s, despite the off moments.

Teammate Valtteri Bottas headed the pack with a 1m26.255s as Ferrari’s Charles Leclerc popped up to third with a 1m26.681s late in the session, where he pushed Red Bull Racing’s Max Verstappen (1m26.896s) to fourth with his lap.

The Dutchman complained of front wing issues as Leclerc had a brief wheel-to-wheel fight with McLaren’s Lando Norris towards the end of the session. He was sixth eventually with a 1m27.167s behind Ferrari’s Vettel (1m27.038s), who did well to be in the Top 5.

For Racing Point, it was headache as Lance Stroll was unwell to take part in the FP3 session as they quickly called in Nico Hulkenberg, who is already at Nurburging to fill in if the Canadian cannot take part in the qualifying. He has to get a negative COVID-19 result.

UPDATE: Racing Point and FIA confirmed that Hulkenberg will replace Stroll for the rest of the F1 Eifel GP weekend after the German completed all of the requirements to enter. Here’s FIA note: https://www.fia.com/sites/default/files/decision-document/2020%20Eifel%20Grand%20Prix%20-%20Decision%20-%20Driver%20change%20request%20car%2018.pdf

Norris had revealed about having a special helmet design for the F1 Eifel GP weekend, dedicating it to Mental Health, but they did not showcase it on Thursday as they waited until Saturday to release details of their association with Mind.

It is not just Norris but even Carlos Sainz has a special helmet to support the World Mental Health Day movement, with McLaren spearheading it. Both the drivers painted the helmet themselves, which will be auctioned to raise more money towards chairty.

They have already raised £190,000 so far. Mark Waller, Managing Director of Sales and Marketing, McLaren Racing said: “This weekend is important for our whole team as we mark World Mental Health Day and raise awareness of the work of our charity partner Mind in fighting the mental health emergency.

“The coronavirus pandemic continues to have a huge impact on mental health for millions around the world. Advocacy of better mental health is something we critically value at McLaren and continuously strive to educate ourselves about, to provide the necessary support to our people.

“We are proud to have partnered with Mind as our chosen charity in support of the #WeRaceAsOne campaign, and the sum raised so far is an incredible effort, from which Mind will be able to help more people experiencing a mental health problem.

“Thanks to the fantastic support for this great cause from our own team members, our fans, partners and our two drivers, we can continue to support Mind, and crucially raise awareness of important mental health issues.”

Here’s where one can donate: http://mind.org.uk/mclarenformind

Hopefully this will give one person out there the confidence to chat to their family, friends or whoever they feel confident doing so 🧡 pic.twitter.com/wNCljfa9LW