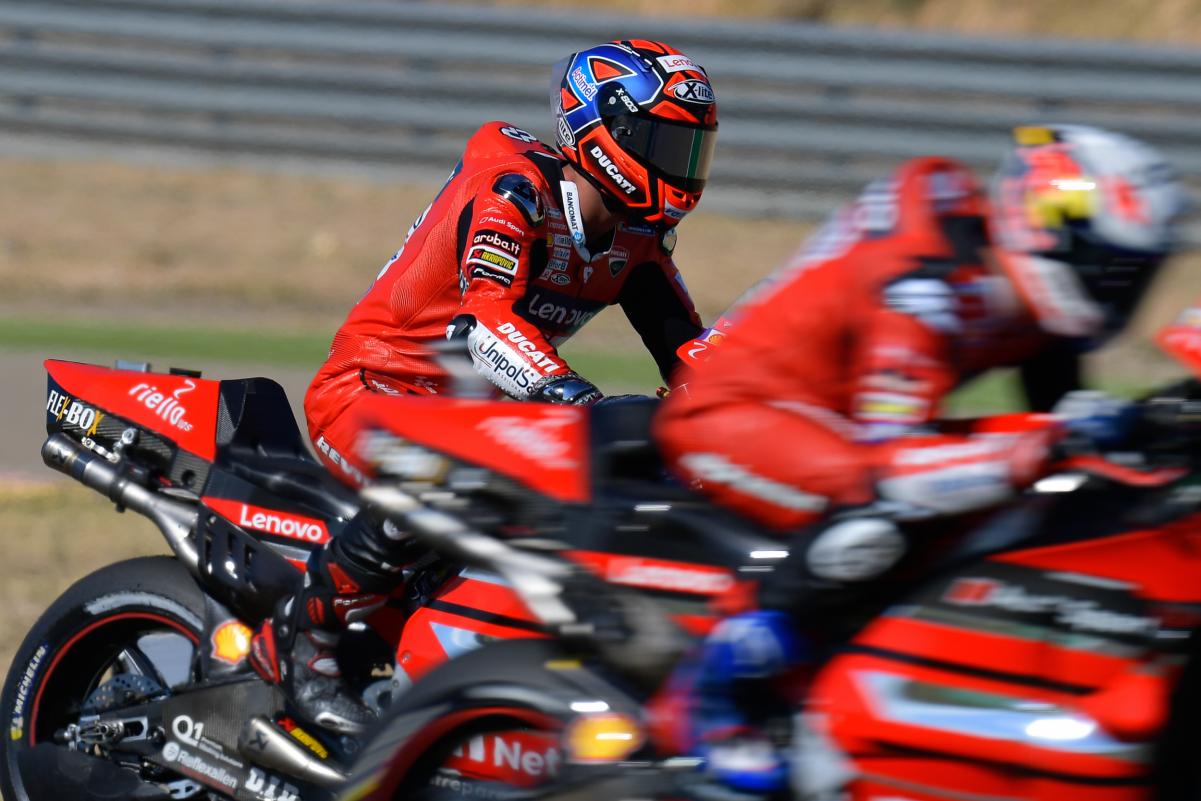 Andrea Dovizioso wasn’t too happy with how Danilo Petrruci used his tow in Q1 of Aragon MotoGP qualifying as Aleix Espargaro explained run-in with Pol.

It was a rare sight to see Ducati’s Dovizioso throwing his gloves off in the garage after missing out in a Q2 spot during Aragon MotoGP qualifying. He was enraged more because teammate Petrucci used his tow eventually to progress to the second part.

To add to his misery, Pramac Ducati’s Jack Miller slotted into second to push Dovizioso to be only 13th for the MotoGP race, while points leader and title rival Petronas SRT’s Fabio Quartararo starts on pole despite the hip injury he has due to practice fall.

For Dovizioso, the first time Petrucci used his tow, he was fine but for the second time when he did it during the all-important lap, that angered him. Even though there was no call from Ducati or team orders, the former reckoned the latter to use his brains.

He thought so because Dovizioso is still in contention for the MotoGP title. “I was disappointed because I don’t think Danilo did the right thing,” he said to media including The Race, Motorsport Network, Crash.net and more. “He didn’t have the speed to be there, he followed me three times and he did the laptime behind me.

“I think with the relationship we have, and that I’m the only Ducati rider being able to maybe fight for the championship, it wasn’t a smart move. For the first run, okay, it’s normal. But the second tyre it happened them same. And that’s why I’m angry about that. So if you gain a tenth because you follow me three times, this means you tried to be in Q2 with my speed.

“And if I’m the only Ducati rider in the title hunt and we have a good relationship because I did a lot of things for him, it wasn’t a smart move. I don’t think in this case it was a Ducati move to sort out, it was more a need to use your own brain when you ride, not just ride,” summed up Dovizioso, as he clarified that he isn’t asking for favours.

“Every rider can race in the way they want – I don’t ask about that – also, when I could ask in the past with the rider of Ducati everybody knows, the Spanish rider… so I’m not that kind of rider,” stated Dovizioso. “But, it’s just to be smart, like in the situation. It’s not about strategy for the championship.

“I’m not that kind of rider and I’m not angry because I need from Ducati something like that in this moment – we need speed, not strategy. I don’t want to say it’s not good to think about team tactics, but on the MotoGP it’s unusual to see a strategy five races to the end,” summed up Dovizioso, as there were mixed vibes about the situation, where the team felt Petrucci didn’t do anything wrong per say.

Petrucci, meanwhile, felt sorry for Dovizioso but reckoned he did nothing wrong as he tried to use the slipstream to make it into Q2 as he was lacking some pace on the straights. “For sure I used Andrea like a target to follow, but it’s like in Barcelona, and since practice, I was losing five to eight kilometres per hour on the straight, which meant that I needed slipstream to lose not much

“I’m sorry for Andrea that he lost his access to Q2, but if not, I have to answer your question why I’m not into Q2. I haven’t received any orders from the team, I just received the order to do my best and nothing else. I think we are free to race and it’s a qualifying, and I used all my, let’s say, weapons, to get into Q2.

“I’m so sorry that Andrea is out of Q2, but if not I’d have to answer the question ‘why are you so slow?’. I’m racing for myself, I’m recovering from a bad first part of the season, I have to use all the chances I have,” summed up Petrucci, who will start from eighth.

Another incident during Aragon qualifying was involving the Espargaro brothers and Honda’s Alex Marquez, where KTM’s Pol hit the back of Aprilia’s Aleix, where both lost out to finish 12th and ninth respectively, while the Honda man was 11th.

It was had the fag end of the session where both the Espargaro brothers caught a slow moving Marquez, who trying to get out of his way to allow them through. But it caught Aleix out, whereas Pol tried to slow down but his left-front hit the rear-right of Aleix.

“I don’t really understand why the Honda rider would be going as slowly as he was there,” said A Espargaro. “It was very strange. Alex Marquez was in the middle of the corner and I had to pick up the bike to avoid contact and Pol hit me. I was pushing, in that lap I did my personal best record in first split and in the last corner Alex was in the middle of the line.

“Maybe I was a little bit wide on the braking, I was risking everything and I had to pick up the bike. And when I picked up the bike, Pol hit me. Unfortunately, our qualifying was finished. But I really don’t understand how one guy in MotoGP when we arrive there at 350km/h in that corner can be stopped,” summed up A Espargaro.

P Espargaro, meanwhile, did not wish to speak about any rider as he felt the media distorts his comments. He felt his lap was look good until the final lap road block and left it on Race Direction decision to know the outcome of the run-in.

On the other hand, Marquez thought it to be an unfortunate situation and saw nothing to be penalised for. “I don’t know what happened,” he said. “I was trying to push behind Vinales, but then I saw that Aleix and Pol were coming and I didn’t want to be in the middle.

“So, I go wide and I think both were going also a little bit wide or a little bit too much in braking. So, Aleix cut the gas and Pol was coming. For me, it’s not that Aleix was not focused. So, for me it’s not any penalty,” summed up Marquez.