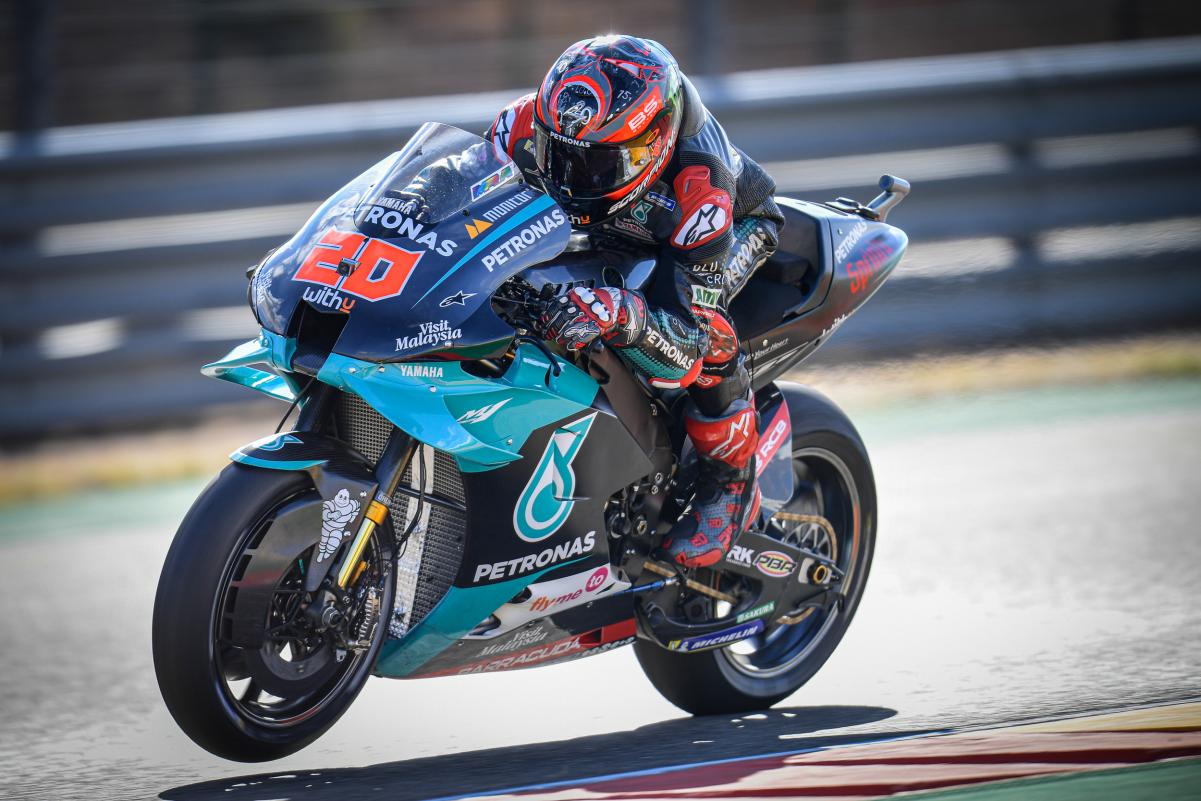 The first part of MotoGP Aragon GP qualifying saw riders fighting out in cold conditions despite the start being delayed by one hour. It was all-Ducati show after the first run but KTM’s Brad Binder slotted in second behind Pramac’s Jack Miller.

It was Francesco Bagnaia in third leading Danilo Petrucci as Avintia’s Johann Zarco displaced the two factory Ducati riders with Andrea Dovizioso in sixth. The second run intensified the fight among riders to find a place in Q2.

The Ducati duo stationed themselves into the Top 2 position with Petrucci leading with a 1m47.605s lap but Miller (1m47.737s) displaced Dovizioso from second to make it into Q2. The Italian was fuming once in the box as he threw his gloves in anger.

It is not often for Dovizioso to show his emotions in such a way but with MotoGP would championship at stake, it got the better of him. With the Italian in 13th for Aragon GP, it was Binder in fourth ahead of Tech 3 KTM’s Iker Lecuona and Zarco.

While one Pramac found its way into Q2, Bagnaia was only 17th ahead of Tech 3’s Miguel Oliveira as Aprilia’s Bradley Smith slotted in 19th, Avintia’s Tito Rabat was 20th and Honda’s Stefan Bradl 21st – with Valentino Rossi the missing name due to COVID-19.

The second part in MotoGP Aragon GP started off with Pramac’s Miller leading the way initially but the Petronas SRT duo were back in front soon enough, with Fabio Quartararo (1m47.296s) leading the way from Franco Morbidelli by just 0.089s.

The Frenchman hobbled onto his seat then after a massive crash early on in practice session as Miller slotted in third from Yamaha’s Maverick Vinales, LCR Honda’s Cal Crutchlow and Aprilia’s Aleix Espargaro in the Top 6, while Suzukis were behind them.

The second run saw a hot battle with Vinales striking first to displace Quartararo. It wasn’t enough for him as the Spaniard found more time to improve on his last attempt to set a 1m47.122s to secure provisional pole. It wasn’t for long, though.

Quartararo fought back to set a 1m47.076s and take MotoGP pole in Aragon GP by 0.046s, despite not being 100 percent fit, as Crutchlow secured a Top 3 finish. Morbideli didn’t more time and had to settle for fourth as Miller was only fifth from Suzuki’s Joan Mir.

LCR Honda’s Takaaki Nakagami was sixth ahead of Ducati’s Petrucci with Aprilia’s Espargaro in eighth after being run-in on the back by his brother, KTM’s Pol Espargaro, which ruined both their runs. The latter ran in the back of the former in left-hander.

The incident was put under investigation by the MotoGP Race Direction, with KTM’s Espargaro ending up only 12th, behind Suzuki’s Alex Rins and Honda’s Alex Marquez 11th.