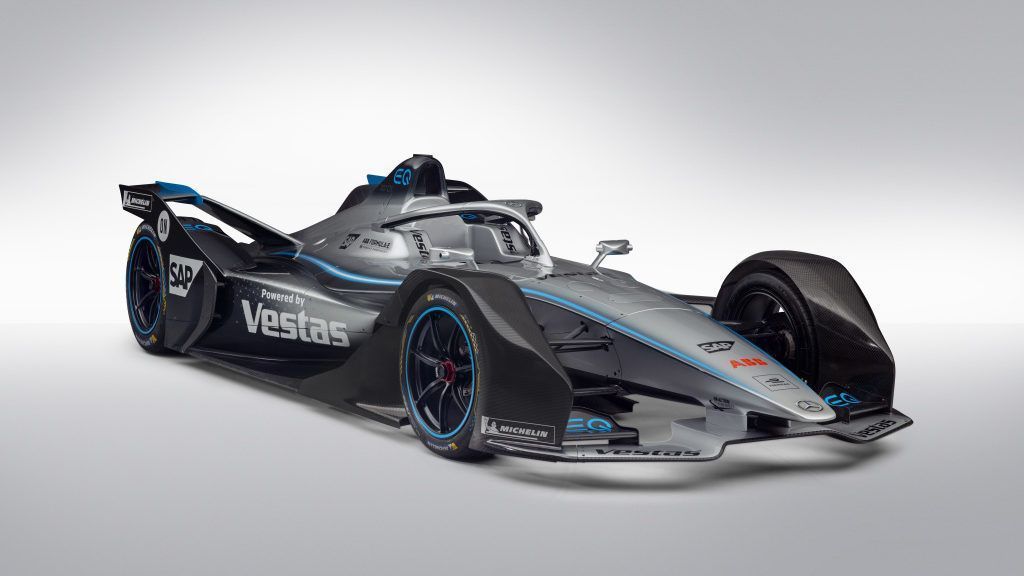 The Mercedes-Benz EQ Silver Arrow 01 has been revealed to the public as the German manufacturer readies for its debut Formula E season in 2019/20, naming de Vries and Vandoorne as its drivers.

The Dutchman, who has been doing simulator work with Mercedes F1 team, will officially join the team’s Formula E outfit with Vandoorne being retained by the team after racing under HWA Racelab in 2018/19.

The team has named Ian James as its team principal, with the team having a grey and black combination with neon blue stripes. “I’m absolutely delighted to be joining Mercedes,” said Vandoorne.

“I’ve already gained experience of the series racing for HWA last year. I am very pleased to have now become an official member of the Mercedes family. The arrival of Mercedes on the scene is a great opportunity for all of us. The car looks fantastic.

“I am looking forward to seeing what we can achieve as a team. The potential is huge, and I simply can’t wait to get started. We made solid progress, and everything went smoothly. After the first functional tests, it’s been fascinating to gradually start working on all the different areas.”

The F2 points leader, de Vries added: “It’s a very special feeling to be asked to drive for Mercedes-Benz EQ in Formula E, and I am honoured that the team have chosen me as one of their two drivers.

“Formula E is a great platform that has already established itself as one of the biggest and most professional racing series outside Formula 1. It’s a great opportunity, for which I’m really grateful to Mercedes.

“I’ve had an excellent reception from the team, and it’s great fun to work with them. But ultimately, it will all depend on the performance on the race track once the season starts. It’s all pretty new to me.

“That’s why I honestly haven’t thought about setting myself any targets for my rookie season. Essentially, Mercedes are aiming to be contenders for race wins and championship trophies.

“Hopefully, this will happen sooner rather than later. But until then, the team and I expect a steep learning curve before we can become truly competitive. The motorsport family is quite small, and you get to know each other at a young age.

“I’m looking forward to driving for the same team as Stoffel. He has a lot of experience and is a great driver. Consequently, I’m hoping to learn a lot from him so that, together, we can get the best possible result for the team.”

Meanwhile, James said: “In Stoffel and Nyck, we have recruited two formidable and adaptable drivers who can continue to learn and grow with us in our debut season in Formula E. At Mercedes-Benz, we can look back on 125 years in motor racing.

“However, we know that Formula E is very different from any other series we have ever competed in. We are doing everything we can to achieve success, but we know that we have a steep learning curve ahead of us.”

And finally, Mercedes F1 head Toto Wolff: “Formula E brings all the enthusiasm and passion for racing to city centres, which is an absolutely unique concept. This makes the series a completely new playing field for us.

“But we are looking forward to the challenge of demonstrating the performance of our battery-electric powertrains in motorsport as well, and of giving a positive boost to the EQ brand.

“In Formula E, we have the opportunity to speak to a young target group that has an interest in the future of mobility, particularly in the inner-city areas of major metropolises.

“At the same time, it is a fantastic platform to ensure that the sustainability principle reaches this target group as well. Of course, we are first and foremost racers, but for me this relationship is one of the other driving factors behind our involvement in Formula E.”