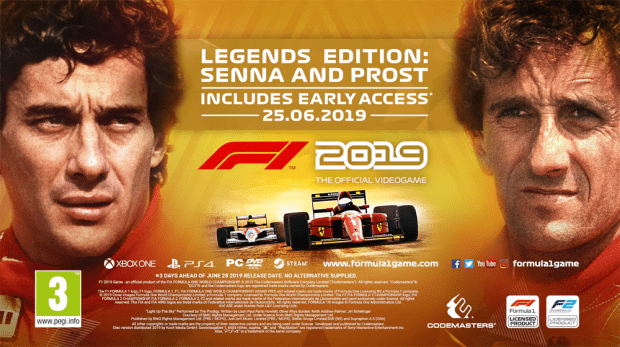 Codemasters have revealed details of the Legends Edition in the 2019 F1 game which also includes the Formula 2 (F2) cars and drivers for the first time.

Late last month, Codemasters confirmed that the 2019 F1 game will be launched two months before the scheduled date with the public to get their hands at the new game on June 28 during the Austrian GP weekend.

The initial release also confirmed that gamers will be able to use the current-spec F1 cars for the first time in the same season while they also added the option of custom livery. The video with the release teased of the addition of F2 cars as well.

The teaser has now been confirmed with Codemasters officially revealing details of the new addition where the gamers will get the 2018 F2 season at the launch of the game, while the 2019 season cars and drivers will be added digitally later on.

Apart from the junior category being added, the bigger reveal was of the Legends Edition which will feature the famous rivalry between Ayrton Senna and Alain Prost, where one can drive as Senna in his 1990 McLaren MP4/5B and as Prost in the Ferrari F1-90.

There are eight race challenges being set for the gamers and comes with the option of an early access of three days i.e June 25. Meanwhile, the Anniversary Edition will have 2010 season’s Ferrari F10, as driven by Fernando Alonso and Felipe Massa.

Along with the Ferrari, the McLaren MP4-25, as driven by Lewis Hamilton and Jenson Button also features in the Anniversary Edition. The classic cars joins other retained ones which includes Sebastian Vettel and Mark Webber’s 2010 Red Bull RB6.

“Fans can see from the new cover art design that F1 2019 has a strong theme of rivalry running through it, just like the main sport itself,” said Pail Jeal,” F1 Franchise Director at Codemasters.

“As such, we are absolutely delighted to have resurrected F1’s greatest ever rivalry between Ayrton Senna and Alain Prost. Their rivalry began right back in the 1984 season and reached one of the most dramatic ever climaxes on the first lap of the Japanese GP during the 1990 season.

“It’s a rivalry which has transcended way beyond the sport and is regarded as the greatest of all time by F1 fans. We know our community will love that the two legends of the sport have finally been immortalised together in our game.

“We’re also extremely excited to be bringing the F2 to the franchise. It’s consistently been one of the most requested features from our community and it comes at a perfect time with the top three drivers from 2018 in George Russell, Lando Norris and Alexander Albon progressing to F1 for this season. We can’t wait to unveil more details on how this is integrated into the career mode in the coming weeks.”

Check out the other details and cover arts from Codemasters