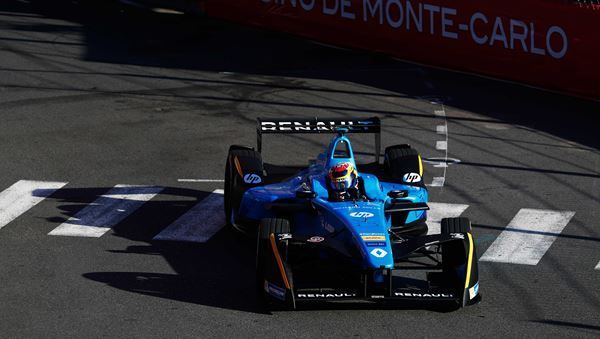 After one of the less exciting races in Formula E history, Sébastien Buemi has extended his lead of the championship after winning his second Monaco ePrix ahead of Di Grassi and Heidfeld.

The race started and, despite some slight contacts between cars, there was no heavy incidents like the ones that happened two years ago. Lead positions weren’t swapped and Sébastien Buemi started opening a gap to Lucas Di Grassi. Some cars, like José Maria Lopez‘s one were damaged.

After some laps with nothing remarkable, both DS Virgin drivers, Lopez and Sam Bird, had to pit to repair their cars. On lap 22, Safety Car was deployed due to an incident between Nelson Piquet Jr. and Jean-Eric Vergne that finished with the French driver into the wall and Piquet losing third place to Nick Heidfeld. All drivers did the car change under the Safety Car period.

Green flag came back on lap 26 and, three laps laters, Jêrome D’Ambrosio‘s car stopped in the track, but re-started a few minutes later and was able to bring the car to Pit Lane. On lap 31, D’Ambrosio‘s team-mate Loïc Duval had also to stop due to mechanical issues.

Towards the end of the race, Di Grassi was reducing the gap with Buemi. On lap 43, López and Stephane Sarrazin pitted again. Two laps later, the gap between Buemi and Di Grassi was almost inexistant and there was going to be a fight for the win. They got really close, but Di Grassi didn’t manage to try the overtake and Buemi won his fourth race of the season and extends his lead of the championship.

This win is also the tenth one of Buemi‘s carrer in Formula E. Behind him have finished Di Grassi, who will have to fight more to fight for the championship; and Heidfeld, who is now the first driver that has a podium in Monaco in both Formula E and Formula 1 (2005).

With these results, Buemi is still leading with 104 points, with Di Grassi second with 89. Drivers running on third, fourth and fifth place of the championship, Nico Prost, Vergne and Bird respectively; have all finished with no points and keep their positions.

The next race will be the Paris ePrix, which will be held next Saturday 20th, being the first time that the series has back-to-back events.