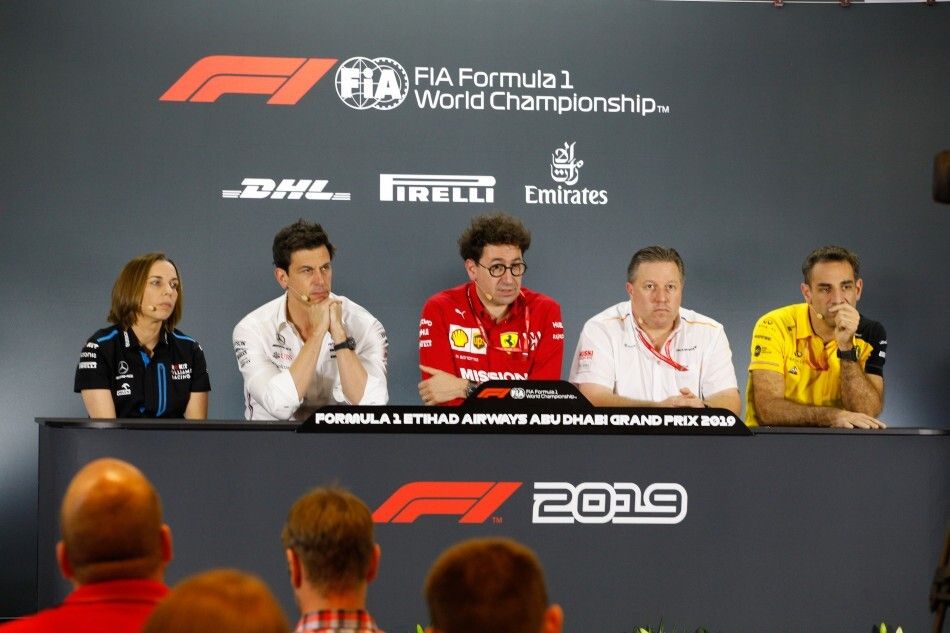 Brown initially raised the topic of lowering the budget cap, citing that the current COVID-19 pandemic will ruin the smaller F1 teams, to the extent that some of them may go bankrupt. The American pointed out four teams, without naming any of them.

The idea from Brown is that the budget cap is lowered to as low as $100 million for 2021 but the new figure being discussed upon is $145 million, which seemingly Ferrari is likely to agree from the original $175 million, but do not want to go any lower than that.

Red Bull Racing sided them with Mercedes on the fence but it is not clear if they are still with them or not. Brown, meanwhile, has pressed on with his stance and has now responded hardly on Binotto’s recent statements, to selected media.

As per the quotes on Racefans.net and BBC Sport, Brown has responded categorically, denouncing most of the points raised by the Italian apart from the employees situation, which seems like the pressing point made by Ferrari.

“We’re obviously in a situation now where if Formula 1 goes by its old habits we’re all at extreme risk for the future of F1,” said Brown. “And I think if we think forward and get with the times we can not only survive what’s going on right now but I ultimately think the sport can thrive and we all win.

“When I look at the various comments that have been made, I’m all for a good healthy debate but the comments I’m being seen put forward don’t stack up, contradict themselves and don’t accurately reflect what I think is reality. At the end of the day it’s all about the fans.

“There’s speak of devaluing Formula 1 as the pinnacle of motorsport if we bring the cost cap down to – pick a number, $135 million, $125 million. We all know motorsport well enough that there is not another form of motorsport even close to F1 as far as the technical sophistication of the sport and at a $180 million spend which, let’s also not forget, that’s just one part of the spend.

“Depending on what you’re paying your drivers, paying for your engines, you’re still north of $200 million. I don’t know another form of motorsport that is remotely close to that level of spend, size of racing teams – even if some teams have to reduce in size. The majority of other motor sports are some sort of spec chassis and there are a few engines to choose or a spec engine, a few engines to choose from. Some are almost completely spec.

“So I don’t believe at all that a reduced budget cap in any way compromises the DNA of F1 as being a technology leader in motorsport.” This was a direct respond on the ‘DNA of F1′ part from Binotto as Brown even stated that if customer cars is a solution, then the sport is going further back than forwards – the customer car, though, is not pressed much.

Brown feels that there is no time to discuss much as the world is struggling to cope up and is being forced to make a quick decision on thinks. “Another comment was that we should not react in a hurry and take our time,” he said. “I’m almost at a loss at what to say to that.

“I think we all recognise that in modern times we’re going through the biggest crisis the world has seen. We have countries shut down. We have industries shut down. And to not be in a hurry to address what’s going on I think is a critical mistake. It’s living in denial.

“I think you would find pretty much every president or prime minister or CEO around the world is operating in a hurry to tackle this issue head-on. And I don’t think any of us know how long it’s going to go or how long and how deep the impact will be.

“But to take our time I think is a very poor leadership strategy. Certainly not one that myself or McLaren and many of the CEOs I’ve spoken to around the world are taking. I’ve not heard ‘take our time’ be on anyone’s approach.”

Brown made quite the remark on the ethics side of things, especially with the employees, but he brought upon the whole FIA-Ferrari agreement in the open to as he believes if the Italian manufacturer is worried for ethics, then they should be more open and transparent with the deal they have had despite the charges from other F1 teams.

“I don’t quite understand the commentary around potentially looking elsewhere to race,” said Brown. “I don’t see anywhere else that has the DNA of Formula 1. And also knowing motorsports pretty well I think if you competed in about every other form of motor racing combined you still would be over-staffed. So I’m not sure I follow both the ‘DNA’ and ‘putting people to work’ logic in other forms of motor sports.

“I’m all for having ethical duties and along the line of ethics I think it would be great if Mattia would share with us, as the FIA has volunteered to share, what the details were behind the secret agreement that they came to over the alleged breach of regulations around their engines. So while we’re on the topic of ethics and transparency, I think that would be a good point and time well served,” summed up Brown.

Also on the distribution, Brown went back to the old discussion of a better distribution of the money F1 makes through TV, Paddock Club, Promoters’ fees and others. The American thinks, the heritage teams already get more share, including Ferrari, so he feels that there should be then another review of it can be distributed well.