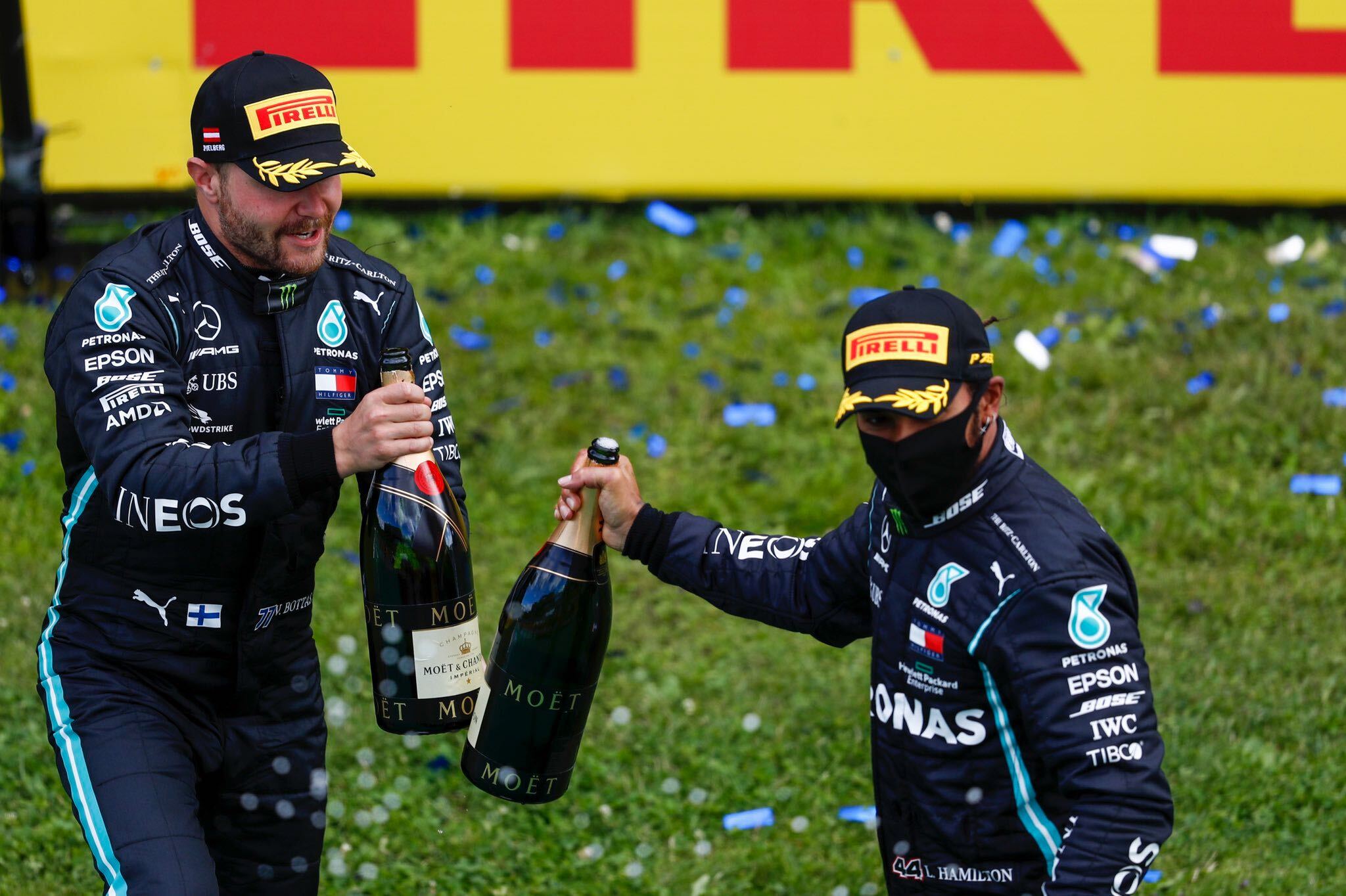 A return to form for Lewis Hamilton leaves the Brit happy as Valtteri Bottas is still at ease as he sees no reason to doubt himself after F1 Styrian GP.

A dialed Mercedes’ Hamilton is an intimidating thing, and this weekend in the Styrian mountains at Red Bull Ring, the Brit was well and truly on the ball, perhaps to the dismay of his closest rivals at the leading edge of the F1 grid.

It was a return to the form we’ve learned to expect from Hamilton, who seemed to be somewhat off in the prior round at the same F1 circuit. The Brit traditionally prefers to take it slow in the early stages of the championship.

But colliding with Red Bull Racing’s Alexander Albon and getting caught out by McLaren’s Lando Norris were particular low-lights that underlined the clumsiness of the weekend. This, compared to Round 2, in which he won the race, and took pole by over one second.

Usually in a F1 season, a bounce-back such as this one from Hamilton signals the beginning of the end for his opposition, but Bottas’ hopes remain high as he stated after the race that he sees no reason to doubt himself or his ability to take the fight to his teammate.

As of now, his scoring of a solid second result in F1 Styrian GP this weekend has meant that he maintains his lead in the championship. “I think in any sport, and especially in Formula 1 – it’s quite a special sport, it’s quite easy to doubt yourself – but for the moment I have no reason to,” said Bottas.

“Obviously over the years you find the right tools, how to find your confidence and the trust in yourself and what you are doing. I have no reason to doubt any of my ability or skills. I know Lewis had a strong weekend. He did a good job. Also, based on the first weekend, I know what I’m capable of.

“So, I really feel many improvements in my driving since last year – so that’s why I’m confident it’s going to be a good battle for the Championship this year. So, I’m not going to let one weekend, even multiple weekends, drag me down. I’ve learned that. Just going to focus on the job and improving myself as we go,” summed up Bottas.

In terms of his own race, Bottas had to fight through Red Bull’s Max Verstappen to take second after starting fourth. “I think the performance of the car was great, obviously qualifying, I should have been stronger,” he said.

“There was obviously some things affecting the performance but even from my side the lap was not that clean and I should have been at least second, so that’s why in some things I’m going to have a look in the mirror why the race was a bit more difficult and could have been possibly a good battle with Lewis.

“But I think, from where I started and how the race went, I think it felt like I and us as a team, we could really maximise everything, so being able to, as a team, get the first 1-2 of the year, only the second race, is obviously really impressive.

“I’m not 100 per cent happy because I didn’t win. That’s how it goes as a driver but Lewis did a great job this weekend and… yeah… still points-wise it’s still early days and everything is looking good, so that’s why I can’t wait for the future,” summed up Bottas.

Hamilton, meanwhile, was thrilled with his rebound, especially as the pace of the Red Bulls – a factor he thinks will play a big role in Hungary – was highly formidable in the race. “It was a challenge this weekend, especially with the Red Bulls really picking up their pace on Friday and we obviously had some sort of issue that we were able to rectify from FP2.

“The team did a fantastic job over the week to improve on some of the issues we had in the last race. I was able to attack a little bit more this weekend and really utilise the car. I think Max, was quite quick, so it just shows that Red Bulls definitely not a pushover.

“I think they’ve done a fantastic job so we’ve got to stay on our toes. We’ve got to go to places like Hungary, where the shorter Red Bull is usually very, very strong. Otherwise, it’s been a great two days and a great way to bounce back from a difficult weekend.

“Valtteri was incredibly strong in Round 1 and just a big, big thank you to everyone back at the factory and everyone here who has stayed. The team has stayed all week and been in every single day, not leaving a stone unturned, so that’s a huge confidence boost,” summed up Hamilton.