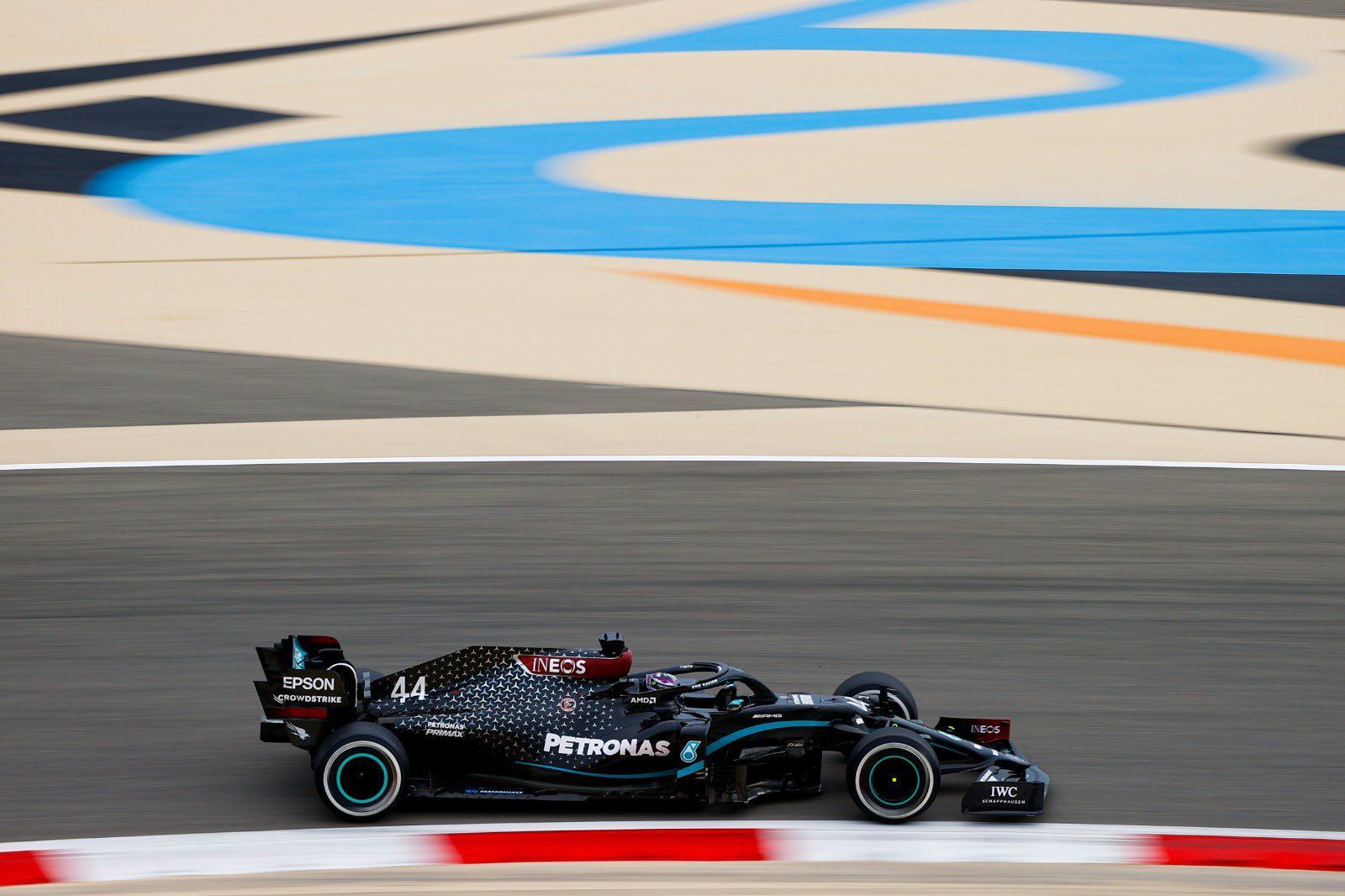 The F1 Bahrain GP FP1 started in cloudy conditions at the Bahrain International Circuit. The session had teams using the 2021 C3 compounds as well, where Pirelli Motorsport asked them to complete at least six timed laps to gather data for the new season.

It was not an entirely clean run with multiple spins/offs for the likes of Haas’ Romain Grosjean (Turn 7), Red Bull Racing’s Max Verstappen (Turn 15), Ferrari’s Charles Leclerc (Turn 3), as track limits at Turn 4 caught out few F1 drivers out as well.

Everyone ran the 2021 C3 compounds barring Williams’ Nicholas Latifi. Meanwhile, the F1 Bahrain GP FP1 session was led by the Mercedes duo with Lewis Hamilton (1m29.033s) ahead of Valtteri Bottas (1m29.482s), where the Finn had a torrid time with multiple lock-ups.

The duo set their best time on the medium compound, while third-placed Racing Point’s Sergio Perez (1m30.000s) had his on the soft compound along with fourth-placed McLaren’s Carlos Sainz (1m30.018s) and fifth-placed AlphaTauri’s Pierre Gasly (1m30.049s).

The two Red Bull Racing drivers were sixth and seventh with Verstappen (1m30.294s) ahead of Alexander Albon (1m30.302s) – the Dutchman had his session ended slightly early as camera showed their mechanics working on the rear of the car.

Meanwhile, Mercedes became the second F1 team after McLaren to get Three-Star Environmental Accreditation by the FIA, after a thorough check at their base in October. The team has been working behind the scenes to settle their carbon footprint.

The target is of achieving a net-zero carbon footprint by the end of 2020 and cutting CO2 emissions by 50% by 2022, compared to the team’s 2018 baseline. So far, they are on-course to achieve the set goals by putting in renewable ways to run their F1 team.

The have similar plans for 2021 and beyond which includes reductions in air freight, water gallon dispensers and reusable bottles trackside along with low-impact hotel stays and use of hybrid vehicles for travelling staff. There is also removal of single-use plastics in catering both at the factory and trackside.

“I am delighted that our team has achieved Three-Star Environmental Accreditation with the FIA,” said Toto Wolff. “This milestone is the result of many months of hard work and commitment to develop and implement a best-practice programme to deliver our contribution to the environmental sustainability commitments of both Mercedes and F1.

“To achieve this, we have concentrated on embedding sustainable practice into our normal business operations, using innovative solutions drawn from our technical expertise to actively reduce our impact on the environment. It’s been an incredibly difficult but ultimately successful year for our team and I am so proud of the commitment that every single member has shown to not only achieving success on track but to ensuring we are making a difference to the world around us.

“We will continue our work in 2021 and onward until we reach our goal of an absolute unavoidable minimum of CO2 emissions. Our parent company is leading the way for sustainable mobility in the automotive industry, and with the FIA and Formula One both committed to positive change within motorsport, we all stand together in our commitment to a more sustainable future,” summed up Wolff.